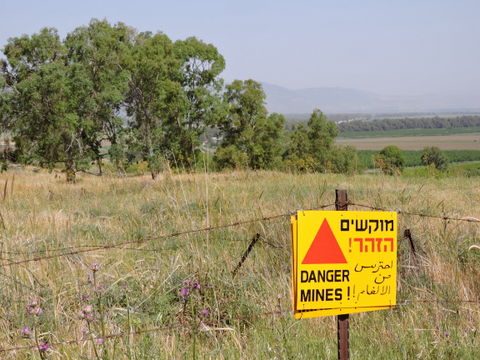 Golan Heights, Israel.  Today, April 17, is Israel’s Memorial Day, when all Israelis pay homage to those who died fighting to preserve Israel’s freedom and very existence.

At precisely 11am, sirens sound for two minutes.  Everyone in the entire country stops whatever they are doing to stand silently in this homage.  This includes anyone driving on the streets and roads.  Cars and trucks stop wherever they are, people get out to stand silently on the road.  We stood here on the Golan Heights.

We looked down upon the Hula Valley, where Syrians aimed their artillery, mortars, rockets, and sniper rifles upon the farmers below in their fields and villages.  The snipers would even fire into the windows of homes to murder men, women, and children inside.

Vast areas of the Golan were mined to prevent the IDF (Israeli Defense Forces) from seizing the Golan to stop the rain of death.  The mines had purposefully just enough explosives to maim – blow off feet and legs – not to kill, so that other IDF soldiers would be taken out of the battle caring for the wounded.

From 1948 when the Syrians seized the Golan to 1967 when Israel recaptured it in the Six Day War (June 5-10), the rain of death continued – and through it all the Israelis in the Hula persevered.  Today, the Hula Valley and the Golan above are peaceful, beautiful, and bountiful – there are even wineries on the heights (and the wine is excellent!).

Vast areas of the Golan, however, are empty because of the difficulty of clearing the millions of mines laid down by the Syrians – the volcanic soil has so much iron metal detectors don’t work.

This is a large sign in the center of Nazareth, the childhood home of Jesus.  The largest Christian Church in the Middle East is here, the Basilica of the Annunciation, built over the traditional site of the home of Joseph and Mary, where the Virgin Mary had a vision of the angel Gabriel informing her that she would bear the Son of God, an event known as The Annunciation.

The church is magnificent –

The Virgin Mary’s home has been excavated and preserved, with the church built over it –

Let’s go back to that Moslem sign.  Realize that Nazareth has no importance whatever to either Judaism or Islam.  It was a totally unimportant working class town that played no role whatever in the Old Testament nor in the Koran.  It is only important to Christians.

Yet Moslems have to announce this insult that Jesus – just like all the founders of Judaism as well, from Abraham and Moses on down – were prophets of Allah, meaning they were really Moslems.

Realize that Gabriel is a Jewish angel – the Messenger of Yahweh.  The original Hebrew is Gavri’el – “God is my strength” – in Greek, the language of the New Testament, Gabriel.  The Moslems have to appropriate the Jewish-Christian angel to claim that their holy book, the Koran, was dictated to Mohammed by Gabriel as the messenger of Allah.

What is the latest denunciation causing outrage among libtards, especially millennial crybullies on college campuses?  Cultural appropriation – stealing another culture, like white supremacist fraternity guys having a taco and margarita party.  It’s another stupid libtard excuse for yet another stupid libtard outrage.

But for real cultural appropriation, history will give no better example than Islam.

In fact, the entire mythology of Islam is one great fiction, based on stealing the beliefs of Jews and Christians, pretending they are Islam’s.

For example, the Koran claims that Mohammed comes from Mecca.  There is simply no evidence for this whatever, outside of the Koran.  Here is where Mohammed – if he ever really lived at all – is from:

Yes, Petra – the fabulous city of the Nabataeans built over 2,000 years ago in present day southern Jordan.  In Mohammed’s time it had been destroyed by earthquakes and was the lair of Arab bandits – one leader of whom was Ubul Kassim, given the title of “Mohammed” meaning “The Praised One.”  The Koran praises him for leading over three dozen thieving bandit raids on caravans.

The books to read about this are by archaeologist-historian Dan Gibson, Quranic Geography and The Nabataeans.  Here is a brief synopsis by an objective Moslem:  Was Muhamad from Petra or Makkah?

Based on this fiction, Moslems proceeded to militarily conquer the entire Jewish-Christian Middle East and Egypt, all of Christian North Africa and Spain, claiming they had a moral right from their made-up imaginary fictional god to force by sword to believe in their made-up imaginary fictional religion – or else pay a tax (jizzya) and submit (islam is Arabic for “submission”) to their rule.

They were only prevented from conquering all of Europe by Charles the Hammer at the Battle of Tours-Poitier in 732, and again by Jan Sobieski at the Battle of Vienna in 1683.  Now they are trying once more with a flood of phony Moslem “refugees” into Europe organized by the Islamic Fascist ruler of Turkey, Recip Tayyip Erdogan to complete the imperialist dream of the Ottomans.

It was only when Ottoman rule faltered and weakened in the late 1800s that churches could be rebuilt in the Holy Land – and only when the Syrians were defeated in the Six Day War could the Basilica of the Annunciation could be built (in 1969).

And as we all know, we – all of Western Civilization, formerly and what should still be known as Christendom – is threatened by the world’s worst imperialism in the history of mankind.

Tomorrow, Israel celebrates the 70th anniversary of its existence.  It is inspiring to be here at this time, for Israel is a country and culture determined to survive, prevail, and prosper.  These should be our goals for America, for Western Civilization, and Christendom.

We may request the assistance of Providence in so doing, but the reality is that the these goals must be achievable by us, you and me.  The Israelis know this very well.