THE WORLD ACCORDING TO CHINA 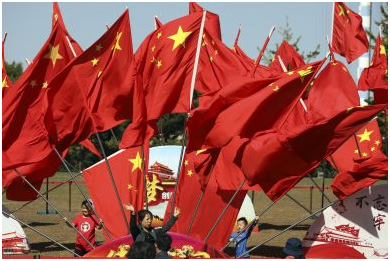 Inevitably as China becomes more powerful and influential in international relations, Beijing will fundamentally change the international system created by the United States and the Cold War.

The key question for international politics is what kind of world does China seek to create by 2049 — the centenary of the People’s Republic of China (PRC). Will China sustain the present liberal system or forge another anchored on its ambitions, culture, and desires? Millennia of Chinese history strongly suggests the latter.

In this essay, we illuminate China’s model of global governance and touch upon its derivative economic and political features. Conceiving of what type of world China will create is significant for three reasons.

First, it is critical for the United States to understand so that the full scope of China’s strategic ambitions and direction may be understood.

Second, as China grows in power and influence, it is essential to comprehend what China will sustain of the present global order versus what it will replace.

U.S. decision-makers should expect that the world China would like to create by 2049 will be fundamentally different. The economic order will be a curious mix of hyper-capitalism and neomercantilism. The political order will be authoritarian.

Whether the United States can maintain its position as the pre-eminent force for free and open societies in the face of a rising challenge from China is likely to be a defining element of international politics in the 21st century and is of immediate U.S. national security policy interest.

The world by 2049 will be defined by the realization of Chinese power. China intends to be the world’s greatest economic and political force, including alliances and global presence. The central issue is how China will use its power. Will China join the liberal world order or will it transform Western rules, norms, and institutions?

China’s grand strategic vision is primacy — China believes it should be the dominant force in international politics. China’s vision is defined by Xi Jinping’s phrase “One World, One Dream,” which is a modern form of tianxia, or “all under heaven.”

This concept serves as the foundation of China’s imperial ideology — the Chinese conception of how the world should be ordered.

The concept of “all under heaven” is the genesis of the Chinese worldview with respect to how China ought to be ruled, its position in international politics, and the subordinate role required of other states.

It implies, first, an ethnic Han polity, which is inherently authoritarian.

Second, it requires that a single powerful monarch, the Chinese emperor (“Son of Heaven”) should rule the entire civilized world — which by definition should be unified under the emperor’s control so that disorder and chaos may be avoided, and reason and just rule may triumph.

The fundamental ideas and values that forged China’s political culture remain today. What China will want in 2049 dovetails with what China wants today and has always wanted in its imperial past.

There is a profound continuity in the Chinese worldview, its imperial ideology, including why its political leaders sincerely believe its domination provides the best outcome for its denizens and for all states in international politics.

For most of its history, China was the epitome of power and held a dominant position in East Asia. Its relationship with neighboring countries was based on a hierarchical tribute system that provided China will vast amounts of power, influence, and prestige.

Thus, we can appreciate why a resurgent China with an emboldened leadership desires to recapture a modern form of this position.

In the economic realm, China is actively seeking to replace the liberal principles of the Washington Consensus with its own development model.

A curious amalgamation of hyper-capitalism with neomercantilist policies, the “China Model” offers subsidized development to developing countries with no strings attached. This model is advanced as “value neutral,” as it does not require governments to adopt democratic principles or uphold basic human rights.

Beijing’s implementation of this model will follow a two-track process that has both short-term and long-term objectives.

In the short term, China will work within the present international trade regime, support established norms, and continue to maneuver within this system to accomplish its foreign policy objectives, which are primarily dependent on maintaining economic development and trade.

Since the economic reforms of the Deng Xiaoping era, China has accepted many of the norms and rules of the liberal world order, joining the World Trade Organization (WTO) for example, and, over time, become more involved in key international organizations, such as the United Nations.

This initial embrace of multilateralism was a combination of choice and necessity, as China’s economic development was dependent upon global integration, expanding its political influence, and developing its soft power.

At the moment, Beijing is unable to overturn completely Western rules and institutions, as it does not have the capacity or incentive to transform the existing international order. Therefore, in the near term, China will continue to work within the Western-led multilateral institutions and tout its support for the established order.

Beijing’s short-term strategy is to maintain the system that has made possible its economic growth and minimize resistance to its actions until its replacement is fully functioning. By not directly challenging the global economic order, Beijing is able to sustain the “peaceful rise” ruse and attract the strong support of many Western academics and policymakers who believe that China will never replace the system responsible for its success.

China will continue to embrace multilateralism and become more involved in international institutions like the WTO. However, while accomplishing these goals, Beijing will simultaneously develop Chinese-led economic institutions like the Asian Infrastructure Investment Bank (AIIB) and the Belt and Road Initiative (BRI), which Chinese political elite argue uphold and deepen liberal values and principles.

In the long term, by the PRC’s centenary, as it plans to become more powerful and for the United States to decline in influence, Beijing will push for reforms that promote hyper-capitalism and minimize liberal democratic principles within Western-led international institutions.

As more countries join Chinese-led institutions, Beijing will be able to use its economic power as leverage to persuade — through a combination of sticks and carrots — Western and non-Western governments to support and adopt these reforms. Despite China’s rapid opening to international trade, Beijing will continue to pursue a dirigiste model and neomercantilist policies.

In this regard, China’s involvement in multilateral institutions is purely strategic. Beijing seeks to mute threat perception and establish a network of economic relations that it can use as leverage and a means to advance its own foreign policy agenda. As China rises, Beijing’s call for hyper-capitalism will be overshadowed by its mercantilist tendencies and cultural chauvinism.

Employing neomercantilist tactics when convenient, Beijing has, on many occasions, used economic power to coerce and punish states that directly or indirectly challenge its authority, security interests, and foreign policies.

For example, in response to the installation of the U.S. Terminal High Altitude Area Defense (THAAD) system in South Korea, Beijing strongly encouraged its citizens to boycott South Korean companies, such as Hyundai, AmorePacific, and Lotte, and implemented a ban on tour groups visiting the country, all of which significantly impacted the South Korean economy and forced Seoul to negotiate with Beijing.

By 2049 according to plan, Western-led institutions will remain, but their liberal principles will be diluted by reforms required by Beijing.

As China’s economic power increases and more countries in both the developed and developing world become dependent on Chinese trade and investment, Beijing will use its economic statecraft to pressure countries to downplay or abandon their democratic values and liberal policies.

At same time, Chinese-created and led institutions will have weakened traditional institutions, as over the long term China will find it easier to advance its domination through its own institutions.

In the political domain, China seeks the triumph of authoritarianism in international politics.

In the past, China’s view of international relations was based on hierarchy and status. Today, this hierarchical perception remains.

Chinese paternalism shapes Beijing’s relations with countries perceived as inferior, be it China’s heavy-handedness in the South China Sea or its business practices in Africa and Latin America.

Such behavior also suggests that China sees itself as the hegemon of Asia and, as a result, is sensitive to foreign influence in the region and quick to respond aggressively to territorial disputes with neighboring countries.

China’s imperial ideology can be clearly seen in statements made by President Xi Jinping on the “Chinese Dream,” particularly his emphasis on “the great rejuvenation of the Chinese nation” and developing “socialism with Chinese characteristics.”

In fact, Xi’s consolidation of power within the Chinese Communist Party (CCP) following the 19th National Congress in October 2017, along with the comparison of “Xi Jinping Thought” with Deng’s and Mao’s thought among Chinese intellectuals and party officials, has many China watchers rightfully concerned that Xi is becoming too powerful.

While the theme of “national rejuvenation” has been used in one way or another by Chinese leaders since Sun Yat-sen, Xi is the first to export the Chinese dream narrative to a global level.

On the whole, a common view in China is that this rejuvenation is simply recapturing China’s lost international status and power. Thus, it is not novel, but is for China rather a return to the proper order of international politics.

If Xi’s “Dream” is realized, we can envision a world where by the mid-21st century, democratic governments survive in the West, but Beijing’s political model will have the upper hand in the international system.

As with the Cold War, the struggle is material — economic and military power matter — but will also and ineluctably be ideological. Certainly, its course will pose, and its outcome answer, an ideologically dispositive question:

Will egalitarianism remain the dominant ideal in international politics, or will it cede leadership back to authoritarianism? However lamentable, due to the expansion of China’s power and influence, it is likely that authoritarian politics will be the norm without serious challenge from the West.

It is probable that China will advance this new wave of authoritarianism to augment its legitimacy. Touting its superiority, Beijing will also advance arguments not dissimilar from “The End of History” arguments made in the West in the early 1990s following the collapse of the Soviet Union.

In contrast to the liberal democratic and free market principles of the Washington Consensus, Beijing’s political model is offering the developing world a regime-type neutral investment model based on “noninterference” in domestic affairs and the promise of “no strings attached” loans and other forms of financial assistance.

This business model is part of China’s “charm offensive” and appears to be growing in popularity, as many around the world see the Chinese way of doing business as a better alternative to the structural adjustment programs of the International Monetary Fund or the push for democratic reform often associated with Western aid.

During the Cold War, the United States served as a global beacon for political elites who embraced certain values and ideas. Today, China is offering authoritarian values that are appealing to governments whose hold on power is threatened by U.S. principles such as the rule of law, free speech, democracy, and transparency and accountability in government.

By 2049, China believes it will be ideationally self-confident and able to exert dominance more effectively in the economic, political, and military realms. Beijing will no longer integrate or negotiate but rather expect others to accept the China Order.

Indeed, we are already witnessing the early stages of international politics under Chinese dominance. China’s ongoing development of military bases in the South China Sea is a clear violation of international law.

And its attempts to suppress free speech, particularly criticism of the CCP, outside its own borders speaks volumes to its goal of supplanting liberal values with authoritarianism.

Bradley A. Thayer is a Professor, University of Texas, San Antonio and John M. Friend is a Visiting Scholar, University of Hawaii. They are authors of How China Sees the World: Han-Centrism and the Balance of Power in International Politics.