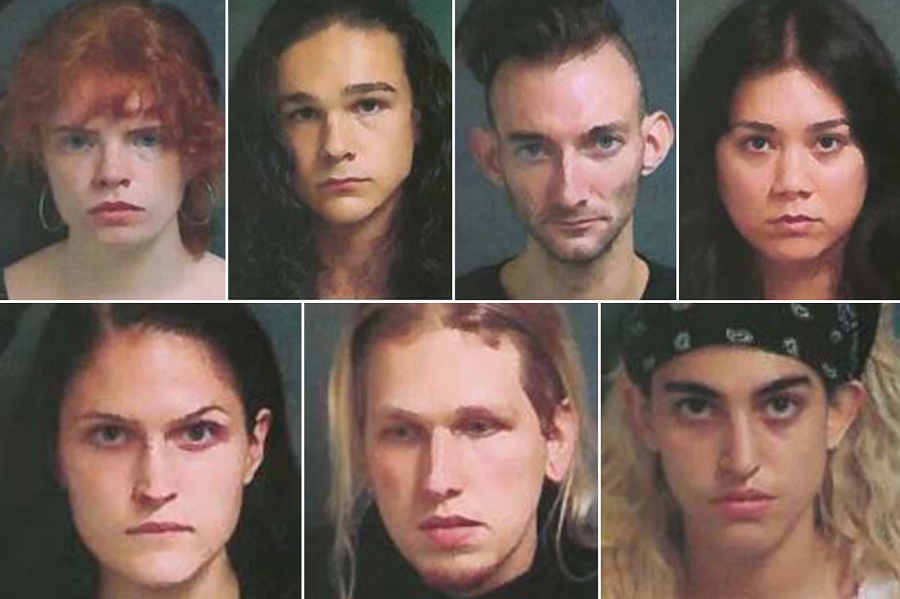 The so-called revolutionaries who were busted for rioting at a New Afrikan Black Panther Party rally took a break from their yacht club lives and modeling careers to be a part of the mayhem.

The seven “comrades” — including wealthy Upper East Sider Clara Kraebber — had their mugshots tweeted out by the NYPD early Wednesday (9/09), days after their arrests for smashing storefront windows in the Flatiron District.

They were cuffed during a protest organized by the Panthers and the Revolutionary Abolitionist Movement groups condemning the death of Daniel Prude, who was killed while in custody of the Rochester Police Department in March. Yes, six months ago.

Along with Kraebber, the redhead daughter of an architect and a child psychiatrist with a second home in Connecticut, five of the others arrested also come from privileged backgrounds — leading one police source to call their actions “the height of hypocrisy.”

Frank Fuhrmeister, 30, of Stuyvesant Heights, charged with rioting and possession of a graffiti instrument, is a freelance art director who’s designed ads for Joe Coffee and has also worked for Pepsi, Samsung and The Glenlivet, among other high-profile brands, his LinkedIn profile and portfolio show.

He studied fine arts with a concentration in photography at Florida State College in Jacksonville, according to his LinkedIn, and his most recent address is a stately home on Reed Island Drive in the city’s tony Beacon Hills and Harbour Neighborhood, public records show.

Adi Sragovich, 20, is a student at Sarah Lawrence College from Great Neck, LI, according to police and her family.

The young activist lost her phone during the rowdy weekend protests and promptly called up her mother, who “made arrangements” to replace the cellphone right away, her mom told me.

“She hasn’t been terribly in touch, she’s been off doing her own thing,” said Sragovich’s mom, Susan Jacobowitz, an English professor at Queensborough Community College.

“I kept thinking I would get a call from the hospital or she’d get arrested because it seems like it’s just dangerous times right now,” Jacobowitz, who didn’t know her daughter was arrested. “At least she’s not on Rikers!” she said.

Before joining the protest, Sragovich was an accomplished musician who spent time performing in local theater groups and at the Sea Cliff Yacht Club, according to the Great Neck Record, which photographed her during a 2017 show.

The article quotes her teacher saying “how impressed she was” with Sragovich, who performed “from her extensive repertoire of jazz numbers.”

In 2018, while a senior at Great Neck High School, Sragovich organized a walkout at the school following the mass shooting at Marjory Stoneman Douglas High School in Parkland, Florida, according to The Island Now.

“It really invigorated me. I feel like my generation is finally coming into its moment,” Sragovich told the outlet at the time. “Unfortunately, that power comes from the fact we’re the ones being hunted and killed.”

Most recently, Sragovich in July was at Occupy City Hall, where she spent time fixing sandwiches and plastic bags of granola for breakfast, according to the New York Times, which interviewed her.

Sragovich has been charged with rioting and did not respond to a request for comment.

Claire Severine, 27, who lives in Washington Heights and was charged with rioting, appears to be a signed model with the We Speak modeling agency who had the ability to jet among Montreal, Quebec and Dublin, Ireland, before settling in the Big Apple to “pursue a career in acting,” according to a modeling profile with the same name.

“Claire has always had a profound respect for nature and enjoys hiking, photographing these hikes, and trying to get other people excited about our wonderful planet!” her modeling profile gushes. “She believes beauty can be found everywhere and in everybody, if you just look around.”

Severine, who lives on Audubon Avenue, could not be reached for comment.

Etkar Surette, a 27-year-old from Brooklyn who summered in Europe as a kid, is charged with rioting and possession of a graffiti instrument.

When approached for comment at his Prospect Park South apartment yesterday (9/09), Surette barked, “I don’t want to talk to you. You can go away,” and slammed the door in my face.

Elliot Rucka, a 20-year-old from Portland, Oregon, charged with rioting, is the son of famed comic book writers Greg Rucka and Jennifer Van Meter, according to his father’s online bio.

Greg penned the comic book series “The Old Guard,” which he then adapted for a Netflix film of the same name — and co-created the “Stumptown” comic series that ABC optioned into a TV show last year.

Calls to Rucka and his family went unreturned.

Poor little rich kids.  So mad at the world that has given them so much.

Gabrielle Fonrouge is a reporter for the New York Post.