THE TWO MOST DESTRUCTIVE FRAUDS IN HISTORY 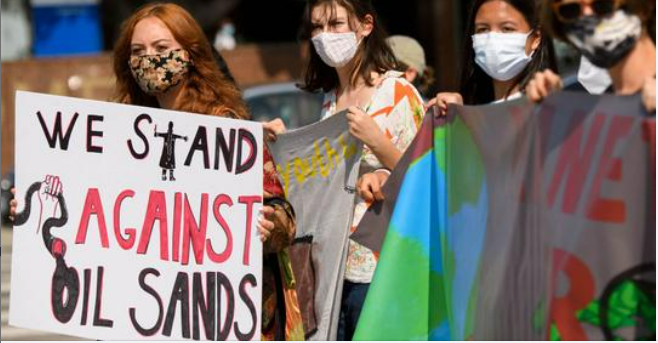 It’s getting harder and harder not to abandon faith in the institutions we once regarded as respectable and relied on to keep the country moving. It is harder still to avoid rejecting unequivocally what has become their core governing premises, which seem to be entirely different from what we once believed them to be.

So here goes: the entire “climate crisis” is an opportunistic hoax; the entire “equity” (along with “diversity” and “inclusion”) movement is a corrupt fraud. This hoax and this fraud have permeated and overwhelmed every formerly respectable sector of American life, with disastrous consequences we’ve only just begun to feel.

If you are someone who still has faith in the ultimate resilience of the institutions that once made America great, try researching positive new ideas. Try to identify and promote solutions to genuine challenges we face as a nation.

Invariably, as you peruse the promotional literature of today’s innovators, no matter what it is you’ve found, you’ll have to sift through endless drivel about carbon this and sustainable that, along with diversity this and equity that, before you might find any facts that matter.

This is a huge problem. Obsessive focus on climate and equity priorities, even supposing those to be important, obscures the essence of pretty much anything substantive one is trying to achieve and deflects attention away from whether or not a new product or innovation might have genuine value. We get it. Less carbon. More diversity. But does the proposed solution work?

Thanks to the obfuscating filters of climate and equity, separating useful ideas from monstrous scams is far more laborious than it should be. And all the while, the scams are getting bigger.

In the name of staving off climate change, the standard of living of all but the wealthiest Americans is being deliberately reduced by people who are utterly indifferent to the fate of the rest. This deliberate destruction doesn’t have to be understood as a conspiracy because so much of it is merely the logical response to an open, incessantly trumpeted “consensus” that appears noble in its aspirations but is diabolical in its impact.

It goes something like this: The climate emergency, along with the inequity of white privilege, are existential threats to humanity, and therefore both require a “reset” to put things right.

To make it almost impossible for Americans to unite and stop the destruction of their way of life, in case the sacred and urgent consensus regarding climate and equity isn’t enough, Americans are also trained to hate each other. And that trope, repeated endlessly and everywhere in myriad iterations, goes like this: If you are a member of the heteropatriarchy, you are an oppressor. If you’re not, you’re a victim.

Of course, the entire narrative must be questioned because it’s all a pack of lies.

Every scientist, every climate “expert,” who speaks publicly on climate change is well aware that his career and reputation depends on saying precisely the right thing. Expressing doubt could be costly.

Those scientists who do stand up to the “consensus” are typically retired and less vulnerable to having their livelihoods terminated. But these scientists are labeled “deniers” and banned from social media as soon as they develop a following of any consequence. So the mainstream media ignores them unless the purpose is to smear their reputations.

As for “equity,” even black conservatives cannot share basic truths. Intact families with a father and mother are the most reliable guarantor of individual success in life. But if you say this, as the eloquent Larry Elder often does, you are chastised as “the black face of white supremacy.”

According to no less than the Smithsonian Institution, if you have a work ethic, a useful education, if you are punctual, polite, self-reliant, and think rationally, you are giving in to “white dominant culture.” If, on the other hand, you embrace thug culture and commit crimes at a disproportionate rate, your offenses are excused because you are a victim of systemic white racism.

This infantile nonsense—and those examples barely begin to describe it—has been spewed into American culture for at least two generations. It has turned the average voter into a Pavlovian stooge, completely unaware that it’s not white privilege, climate change, or racism that is to blame for the average price of rent to double in the last 12 months or the price of electricity to triple, or the price of food to quadruple in some instances. Rather, this reset trauma is a logical next step in the consolidation of wealth and power in America into the hands of a few hundred billionaires.

Listed below are some of the major problems Americans face, along with obvious solutions. Here as well are the reasons our elite claim these solutions are unacceptable, the real reason for their objections, the solutions they’re pushing instead, and why their solutions are dreadfully wrong.

We have expensive energy. The rational solution is to develop more oil and gas, along with nuclear power.

We’re having a drought. The rational solution is to increase the supply of water by collecting storm runoff in new reservoirs and aquifers, desalinate water from the ocean, and recycle wastewater.

We have a food crisis. Irrigate more crops with the enhanced water supply, let cattle graze in the forests, and build more meat processing plants.

We have forest fires, and lumber is too expensive. Bring back the timber industry.

None of this can be done, however, because all of it would supposedly destroy the environment. Would it?

Notice the common thread: the obvious, common sense solutions involve fostering abundance, something Americans used to be good at doing. But the preferred solution to every problem now is to conserve, to restrict, to ration, and to pay higher prices.

When you impose regulatory barriers in the name of sustainability, you don’t merely raise the prices of water, energy, food, and housing. You drive out of business the small competitors that might emerge to serve the demand for these products and services. They don’t have the economies of scale to navigate the regulations, pay the permits, and fight off litigation.

It is impossible to overstate how centralized financial power in America has already become. BlackRock, an investment fund dedicated to the divestment of American fossil fuels, now has over $10 trillion under management. BlackRock is only the biggest of many powerful investment funds promoting “ESG” (short for “environmental, social, and governance,” these are climate change and equity-inspired criteria used to screen investments), with the declared goal of eliminating fossil fuel. Any energy-literate person knows this is impossible.

They will not succeed. But they can, and will, make the price of oil and gas prohibitively expensive.

It isn’t just BlackRock and the big hedge funds, however, that have tacitly agreed to turn America into a nation of lords and serfs. With a few heroic exceptions, it’s every individual and company with a billion or more dollars to throw around.

Homeownership was once the one sure way Americans had to build generational wealth. But housing is becoming more and more unaffordable. A middle class family cannot compete with institutional investors who buy homes by the thousand, and pay for them in cash.

To help keep housing prices high, they’re letting foreign buyers get a piece of the action. That keeps real estate portfolios appreciating, and it also helps collateralize the dollar. Who wants Chinese gold, when you can buy American real estate with your surplus dollars?

And to make sure that every time a family farm patriarch dies, the land gets purchased by a multinational corporation or a billionaire hedge fund or a foreign sovereign wealth fund, cram down the production of fertilizer, then jack up its price along with every other agricultural input from seeds and tractor fuel to irrigation water, and drive them out of business.

Do all this for the earth. Do it for sustainability.

Never mind that renewables are as destructive to ecosystems as conventional energy. Never mind that without large-scale use of commercial fertilizer, ordinary citizens in developed nations are driven into poverty, and those in poorer nations starve to death. Protect the climate! Fight racism!

This is vacuous, unwarranted, evil nonsense, and yet we have to hear Judy Woodruff, Lester Holt, Nora O’Donnell, David Muir, and all the rest of the thespian marionettes who masquerade as journalists intone this litany day after day, until we’re so numb we no longer realize we’re being fed garbage.

What’s happening to Americans right now is a monstrous crime. Through deliberate and easily reversed policies, the cost of living in America is being elevated to empower the wealthy and impoverish everyone else. The justification for all of this is the climate emergency that must be countered by any means necessary, and systemic racism that must be eradicated.

Climate alarmists and equity fanatics must be confronted. If they are sincere, they must be shown how they’ve been lied to.

If they are opportunists, they must be held accountable. Candid and unequivocal rejection of the climate and equity agenda does not diminish concern for the environment and respect for the dignity of all individuals.

In fact, it restores authenticity to those sentiments and opens pathways to practical solutions for genuine challenges. But if the people pushing this extreme agenda are not stopped cold—and soon—they will destroy our civilization.

Edward Ring is a senior fellow of the Center for American Greatness. He is a co-founder of the California Policy Center, a free-market think tank based in Southern California.