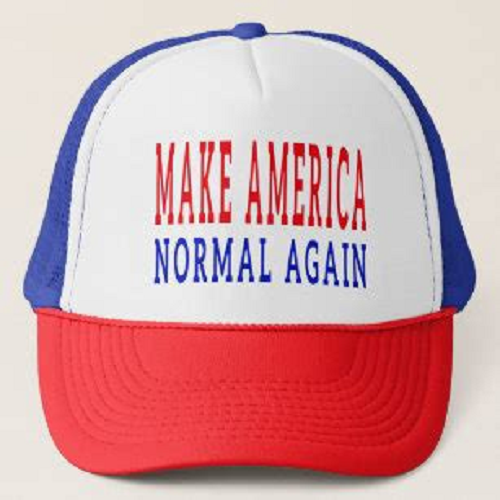 We could be discussing headline-grabbing issues, such as the Black Lives Matter riots in Chicago (where looting now equals reparations), schoolteachers refusing to teach while demanding pay, or any other Leftist retreat from reality.  But frankly, I’m bored.

I have had it up to here and beyond with the Leftists’ dystopian flights from reality.  I want normal life back again, and I think a lot of other people do, too.  Therefore, I’d like to propose a new Trump/Pence campaign slogan, or mantra if you will:

Now we’re shaking off the effects of the wars in Iraq and Afghanistan.  After 17 years of fighting, almost 7,000 men didn’t make it home.

Then, in America, the Spanish Influenza killed around 675,000 people out of a population of fewer than 106 million. Those hit worst were young, healthy people.

Now, the Chinese virus is on the move, having killed around 150,000 people.  Most of those who died were elderly or otherwise immune-compromised.

America has suffered most from the Democrat-pushed lockdown.  We were initially told that most of us would get sick, but that a locking down for two weeks would slow the spread, giving hospitals a head start.  Six months later, large swaths of blue America are still locked down as politicians panic about new cases and enjoy too much their power over every aspect of people’s lives.

Then, 1920 America was shaken by socialists.  On September 16, 1920, a bomb went off on Wall Street, killing 38 people and wounding hundreds.  This came on the heels of a series of anarchist bomb attacks across America.

Now, America is being shaken by socialists.  On the streets, they riot, loot, fight police, and destroy public property.  In the realm of ideas, Leftists push the Overton window — which defines the realm of what’s politically acceptable — into lunatic levels.

In 1920, Warren G. Harding won on a slogan promising something that overwhelmed Americans deeply wanted: a “return to normalcy.”  Back then, though, there was no going back.

Prohibition, by turning ordinary people into criminals, paved the way for organized crime and broke the social contract of law and order.  The 19th Amendment, which gave women the right to vote, changed the balance of power within society.  Those genies left the bottle for good.

The Roaring ’20s, helped by moving pictures and affordable cars, paved the way for the modern.  Additionally, the Dust Bowl dislocated tens of thousands of people.  Still, the war was over; the Spanish Influenza was a memory; and the socialists, while still buzzing around, got overrun by a strong economy.

Now in 2020, a return to normal means recognizing that what the Leftists are pushing is anything but normal, either as defined by the last half-century of American life or as defined by actual reality.

Returning to a solid American reality is a doable form of embracing normalcy.

Normal means rejecting the claim that America is a toxic country defined entirely by racism.

America’s slave past is shameful, as is the racism that followed.  But that is the past.  We have rejected the slavery and racism (and/or tribalism) that have been the norm since the dawn of human history.

The Constitution, in its current iteration, is completely colorblind.  It is concerned solely with the human condition.  It promises a normal in which all people are equal under the law because all are in the Creator’s image.  We are variations on a theme.  End of story.

We have inherent rights, and the government cannot impinge on them.  Again, end of story.  That’s the American normal.

Only wishful thinking, not science, supports that notion.  Pushing young people into mutilating surgery and cancer-and-sterility-causing hormones is immoral and dangerous.

So is forcing girls and women to share bathrooms, locker rooms, sports events, and prisons with mentally ill young men.  Body dysmorphia is pitiable, and we should treat sufferers with gentleness and respect.  That doesn’t mean, though, that they get to impose their mental illness on society.

Sure, there are a lot of people who seem like jerks when we’re on the wrong end of the law, but, mostly, our law enforcement agents serve and protect.  Normal means helping the police rid their ranks of the bad apples while respecting and supporting the good cops who keep our communities safe.

Normal means acknowledging that a country needs borders that are fair and well managed.

Normal means that we are nature’s stewards, not nature’s slaves.

You can easily think of other indicia of what’s normal, both by American standards and by reality. You know you want normal back in your lives.  And there’s only one way to get on November 3rd.