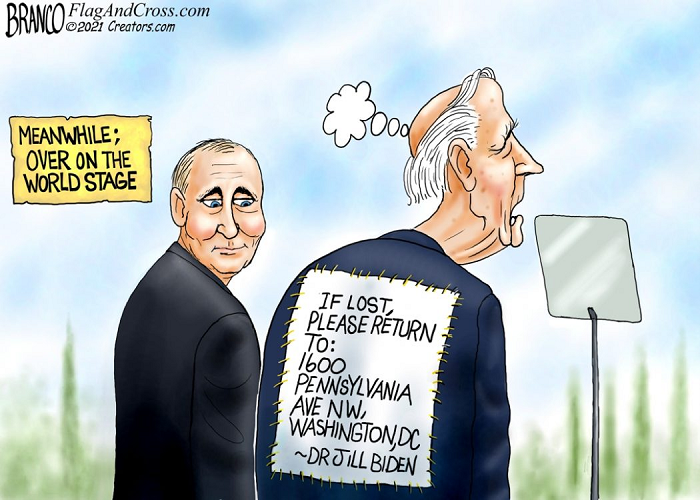 Here is why the “Joe Biden” regime only has a few months to live: it is caught in a squeeze between some of the greatest lies in world history, and they’re all unraveling now.

Anyway, “Joe Biden” is not really functioning as president of the US; he’s just the doddering, photo-op front-man for a kind of politburo centered around Barack Obama, and that group lives in terror of being found-out, which it will be, despite its capture of the traditional news and social media.

Big Lie No. 1 is actually a whole bundle of lies surrounding the Covid-19 pandemic.

The chief national health official, Dr. Anthony Fauci (a.k.a. “The Science”) can’t get his story straight about whether or not he funneled US taxpayer money to a lab associated with China’s People’s Liberation Army, to engineer a virus that was turned loose on the rest of the world. An email train of evidence shows that he did.

That was bad enough. Then Dr. Fauci (and most of the nation’s medical bureaucracy) worked hard to suppress cheap and effective treatments that defeated the virus and cured patients if used in the early stages of infection, namely, Ivermectin, Hydroxychloroquine, Vitamin D, and Fluoxetine. (Fluoxetine, or Prozac, used “off-label,” modulates brain inflammation.)

The suppression actively continues to this day. Dr. Fauci & Company promoted the use of a PCR viral testing system run at excessive cycle thresholds that flooded the medical system with false positive tests. The test’s inventor, (Nobel Prize winner) the late Dr. Kerry Mullis said the test was never meant to be used as a diagnostic tool.

Dr. Fauci and the medical bureaucracy are promoting an experimental “gene therapy” as “vaccines,” or so says the man who invented the mRNA vaccine procedure, Dr. Robert Malone — and you can hear him say that in this three-hour-plus roundtable discussion on Bret Weinstein’s Dark Horse YouTube podcast (if it hasn’t been taken down by the time you read this, because to-date YouTube suppresses all mention of Ivermectin, etc.).

You will learn in this detailed discussion that the three vaccines being used have produced more deaths and “adverse events” in aggregate than all the other vaccines medicine has developed over the past thirty years. Let that sink in. You will also hear Dr. Malone describe the spike protein, which is the chief mechanism activated by the vaccines, as a “toxic” agent.

This cannot be good news for the millions who gave their consent to be vaccinated. We have no idea what the long-term effects will be, but it’s apparently the case that the toxic spike protein does not behave the way it was supposed to.

That is, it does not remain in the intramuscular vaccination site, but rather migrates all through the body, with a special affinity for causing cardiovascular mischief, neuromuscular disorders, and damage to reproductive organs. Stand by on how all this works out.

And beware of fresh attempts by your government to coerce you into a vaccination, or a series of them.

This is a fast-developing story, obviously with many sub-plots, but the net effect for “Joe Biden” will be to badly erode whatever shreds of legitimacy still hang on him.

News about vaccine deaths and “adverse events” has also been suppressed, but that effort appears to be falling apart now, even as the government ratchets-up pressure to jab the substantial number of the “vaccine hesitant.” (Count me as “vaccine fuggeddabowdit” on this one.)

That colossal scam, which the Democrat party advertised well in advance, and accomplished via blatant mail-in ballot fraud and computer voting machine tweaking, was never properly adjudicated — despite media claims that court cases were dismissed on the basis of evidence, which was not so.

The Arizona vote audit underway is the first of probably many efforts among the so-called swing states to interrogate that operation.

The “Joe Biden” government tried and failed to shut down the AZ audit early in the game. Then, late last Friday (6/11), Attorney General Merrick Garland upped the ante, saying that he was about to send a gang of federal attorneys down AZ-way to scotch the darn thing.

Recall that, constitutionally, elections are conducted entirely under the prerogatives of each state, not the national government.

The AZ audit was ordered by the Arizona State Senate. State Senator (and former fighter pilot) Wendy Rogers, replied to AG Garland, “You will not touch Arizona ballots or machines unless you want to spend time in an Arizona prison. Maybe you should focus on stopping terrorism.”

The next move is Mr. Garland’s. Will he send in federal marshals to seize the ballots and Dominion machines? Or will “Joe Biden” tell AZ Governor Doug Ducey to sic the national guard on his own state senate?

If you want to start a real civil war, that would be a good way to kick it off.

Other state legislatures have sent delegations down to Arizona to observe and familiarize themselves with the audit procedure, with the prospect of doing the same thing in Georgia, Pennsylvania, and other places where janky outcomes were seen in key counties last November.

The Democrats know this is possibly lethal to their control of national affairs. Any way they move now, the result will lead to a desperate loss of legitimacy, especially at the top, where “Joe Biden” dwells.

The third “Big Lie” is that the US economy is “recovering” from the Covid-19 disruptions.

The US economy has been a Potemkin village since 2008, held together with the baling wire and duct tape of Federal Reserve money games and, more so lately, US government fiscal recklessness — i.e., spending vast amounts of borrowed money on direct payments to broke citizens, broke businesses, and, apparently an equal number of outright crooks who just gamed the various bailout categories.

For now, many places are supposedly caught up in the exuberant reopening of daily life activities: restaurants, travel-and-leisure businesses, big league sports.

Sounds good, maybe, but the frothy feeling is belied by the still-boarded-up shopfronts and the expanding homeless campgrounds of the big cities and by the noises made by big corporations laying off thousands of employees.

One narrative says that many service jobs go begging because too many people still receive government handouts that add up to more than such jobs pay. And some businesses, such as restaurants, say they are offering much higher wages than they used to in a desperate effort to keep operating.

Okay… but consider how long you can run a restaurant paying dishwashers $25-an-hour, for example, especially considering how much of the population is too broke now to eat in restaurants that charge a third-again as much for dinner as they did before Covid-19.

What you’re actually looking at is a broken business model for much of the service industry. Sometime this summer, that pretty big problem will be acknowledged, and the nation will see that we are not in a recovery at all, but rather a permanent contraction that will be labeled “a depression.”

The direct implication of this broken cycle will be even more social distress, which is being aggravated by the racial provocations ginned up by the Woke “Joe Biden” regime, and which will blow up in its face if there is another summer of riots, burning, and looting.

Thus, there is the horizon on the “Joe Biden” administration, with sunset probably due this fall. How it will play-out is anybody’s guess.

Mine is that, one way or another, some military caretaker administration may have to interrupt the 232-year-long cavalcade of governance led by legitimately-elected presidents. Perhaps we’ll run a re-do of the last election.

Or maybe we’re in for a new phase of the American project, a more uncertain and less appetizing one, featuring dictators and despots. Or maybe we’ll get through this very dangerous defile of history and land in a much lower-key but more coherent disposition of things recognizably American. Good luck to all of us.

James Howard Kunstler is the author of The Long Emergency, Too Much Magic, The Geography of Nowhere, the World Made By Hand novels, and more than a dozen other books. He lives in Washington County, New York.