2 The Point News » Guest Authors » Members Only » THE TEN STAGES OF GENOCIDE – WHICH STAGE ARE WE AT NOW?

THE TEN STAGES OF GENOCIDE – WHICH STAGE ARE WE AT NOW? 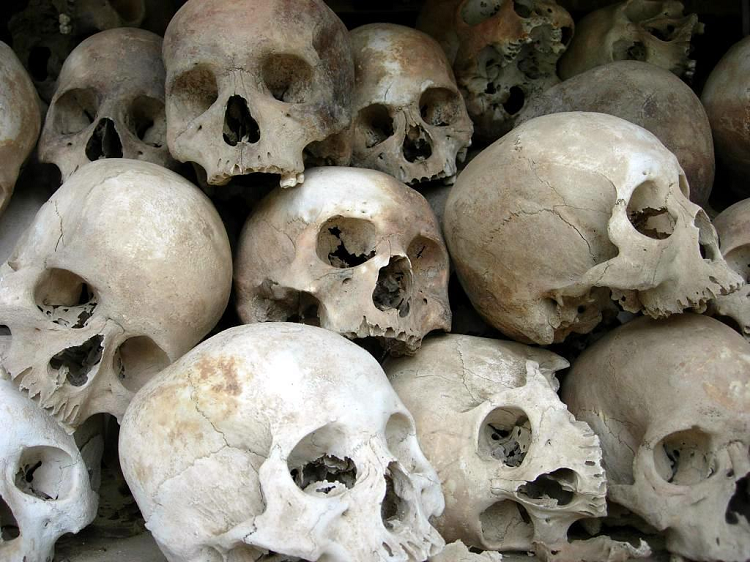 As we wait to see what our commie-fascist ruling class has planned for us next, this might be a good time to pull out Gregory H. Stanton’s “Ten Stages of Genocide” as a helpful reminder for keeping track of how things are “progressing” (pun intended).

Stanton, an academic and the founder of Genocide Watch, organized a sobering list of red-flag actions undertaken by governments over the last century on their way to committing mass murder.  See if any of them rings any bells with how supposedly “free” governments are behaving today.

(1) Classification: Governments begin dividing people into “us” versus “them.”

Black Lives Matter and Antifa rioters and looters are lauded as civil rights heroes, while Trump voters who protest for election integrity are denounced as “insurrectionists,” hunted down by the regime enforcers at the FBI, and left rotting behind bars with little in the way of due process.

Those who object to governments’ totalitarian plans to spend hundreds of trillions of dollars and take control over free markets in order to combat the weather are ridiculed as “climate deniers.”  Those who believe governments’ authoritarian reactions to the China Virus have been more harmful to humanity’s well-being than the virus, itself, are demonized as “selfish,” “ignorant,” and “anti-science” villains.

And now, even after denying that they would ever institutionalize “vaccine passports” as requirements for travel outside the home, governments are, in fact, remaking their nations into “papers, please” police states.

(2) Symbolization: Governments start forcing “unclean” people to wear symbolic articles of clothing, so they clearly stand out from everyone else.

Coercing people to submit to experimental injections with unknown health risks is prohibited by longstanding international treaties designed to prevent crimes against humanity.  That certainly hasn’t stopped most Western governments from throwing ethics and law out the window in order to rush out a medical treatment before anybody could possibly know the long-term consequences.

What about those companies and government administrators who aren’t quite ready to admit they’ve gone full Josef Mengele in the name of “science”?  They have an easy solution: those who refuse to “vaccinate” must wear face masks until they do, even though numerous studies have proved that ordinary cloth masks do next to nothing to prevent the spread of disease and even though numerous studies have proved that the “vaccinated” still carry a viral load equal to or greater than those who have refused experimental treatment.

As with everything that governments have done to use this “health emergency” for their own authoritarian “Great Reset” goals, the mask has nothing to do with health.  It is, however, an effective symbol pushed by governments to publicly ostracize those who refuse to obey.  And in those jurisdictions that have already gone back to universal masking regardless of “vaccination” status, those who refuse to play “mask theater” make themselves all the easier for governments to isolate and target.

Would you like to keep your job?  Take the jab!  Would you like to enjoy indoor dining, sporting events, or church service?  Take the jab!  What’s that, you say?  You have many detailed medical objections against being forced into injecting yourself and your loved ones with an experimental “vaccine” when the risk of death from the China Virus for reasonably healthy people — especially young people — is exceedingly low?

Sorry, that’s “misinformation” that the State will not tolerate, and Facebook, Twitter, and Google must revoke your free speech “privileges” until you come to your senses.  We hope this re-education has been helpful!

(4) Dehumanization: Governments subtly deny the humanity of discriminated groups by comparing them to animals, vermin, insects, or diseases.

Strangely, even after the most extensive global “vaccination” campaign in human history, “breakthrough cases” are still popping up (and often in the most “vaccinated” parts of the world).  Joe Biden and CDC director Walensky know whom to scapegoat for this predicament: blame the “unvaccinated” for the “vaccinated” contracting the disease.

Logic doesn’t matter when the medical mafiosi’s real motive is to pile government failure onto the backs of the innocent.  Prosecute the “unvaccinated” for murder!  “We can’t wait for all of them to die!” compassionate Hollywood “humanitarians” shout.  “MAGA people are a disease,” everybody from Jennifer Rubin to David Plouffe seems to agree.

A cardiologist who recently died (how strange!) after his third COVID jab summed this dehumanization up best by proudly proclaiming before his unexpected death that he would not shed a tear at the funerals of the “selfish” unvaccinated.  That turned out to be true.

Just because Democrats are always promising to drag out the guillotines to execute MAGA “deplorables,” that doesn’t mean the U.S. government is making plans to help.  On the other hand, now that the IRS, DOJ, and Intelligence Community are all active arms of the Democrat Party, they’re not exactly not helping, are they?  Just ask teenager Kyle Rittenhouse.

(6) Polarization: Propaganda is utilized to amplify the differences between “us” versus “them,” and interactions between groups are limited.

The most self-congratulatory “progressive” governments in the West routinely applaud themselves on their ability to reward transgenders, non-white racial groups, and anti-Western jihadists while actively working to purge traditionalists; conservatives; liberty-minded folk; and straight, white, non-Marxist males from positions of power.

Any speech not sanctioned by government authorities is now “hate speech.”  Anyone opposed to racial Marxism is slandered as a “racist.”  The “vaccinated” are encouraged to avoid the “unvaccinated.”  Talk of “unity” is nonexistent when government-fueled division is what’s useful.

(7) Preparation: The victims of future mass killing are identified, separated, and forced to wear distinguishing symbols.

You didn’t think the Biden regime was collecting information on gun owners in order to fight crime, did you?  You didn’t think using the Post Office to spy on Americans’ social media accounts was for their own good, right?  Why are Democrats pushing so hard to expand the IRS’s snooping powers into every American’s checking account?  The U.S. government is busy making its list and deciding right now whether you’ve been naughty or nice.

If Australia’s or Canada’s efforts to build internment camps for the “unvaccinated” seem like foreign news, perhaps the state of Washington’s efforts to do the same thing should pique Americans’ interest.  How does one distinguish between quarantine, internment, and concentration camps anyway?

(9) Extermination: The massacre begins, and government actors justify their mass murder as a necessary “extermination” of non-humans who deserve to be killed.

This is where the 2nd Amendment gets real, because a lot of Americans aren’t going down without a fight!

(10) Denial: The brainwashed perpetrators of genocide deny having committed any crimes — blaming their victims for their own murders.

Only a bunch of socialists, communists, and fascists who have already murdered well over a hundred million people this last century without sating their bloodlust could keep on killing without reflection or remorse.  Besides, everything they do is with “the best of intentions” and for “the greater good.”

How many of these ten stages have already come to pass?  What’s your count?  If alarm bells aren’t ringing near you, then now is the time to hit the damn bell with everything you’ve got.

J.B. Shurk is a conservative author who writes for numerous pro-American publications.