All photos by Jack Wheeler 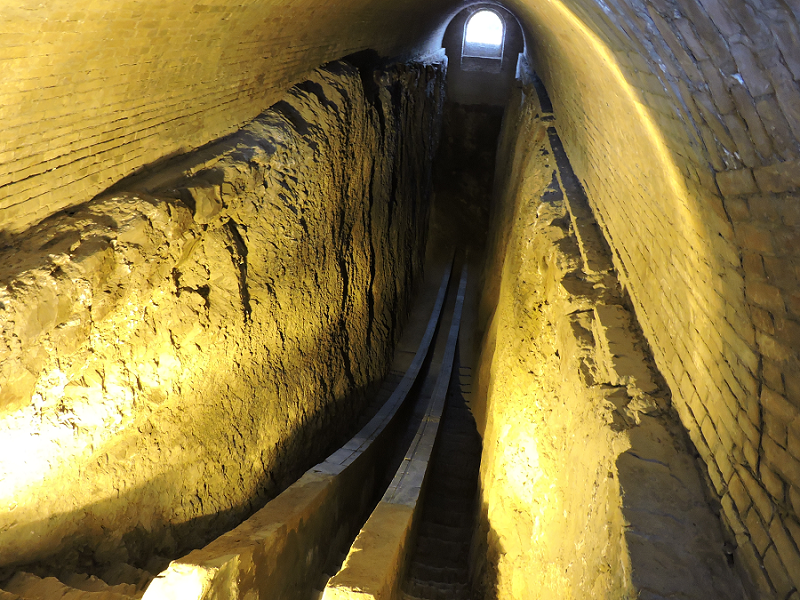 You’re looking at something historically and scientifically astonishing.  It is what remains of an astronomical observatory built 600 years ago – in 1420 – by a Sultan in Central Asia who loved science and mathematics more than war and conquest. 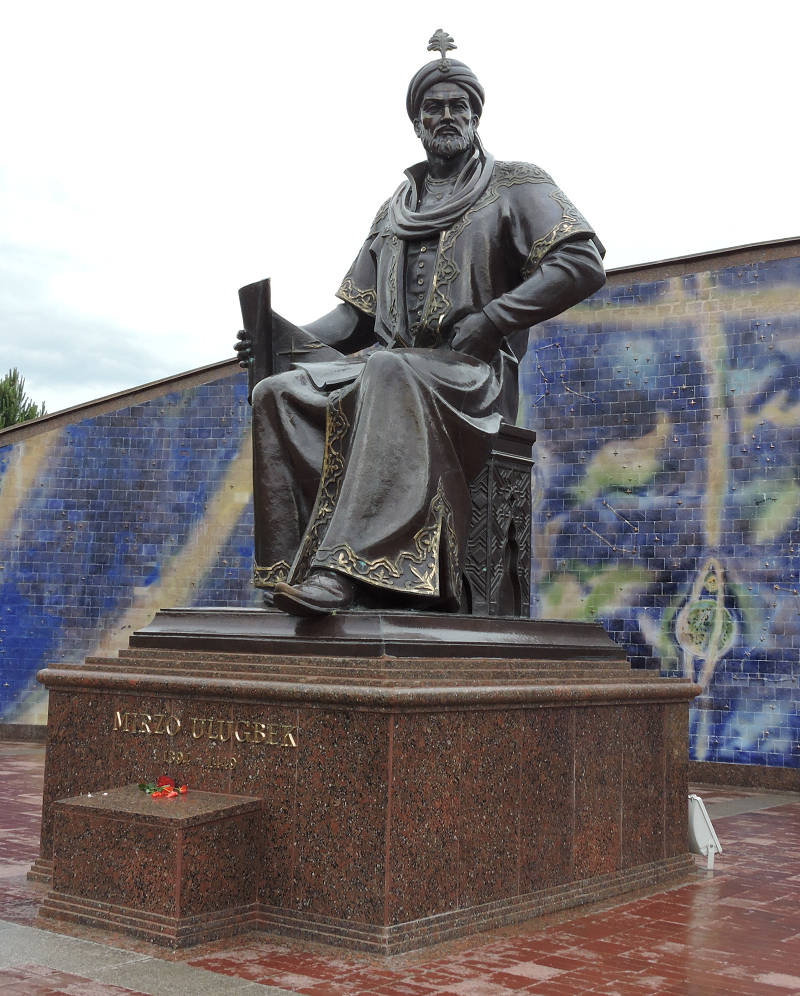 Grandson of the nomadic conqueror Tamerlane (1336-1405) who devoted his life to war upon other peoples as did his ancestor Genghiz Khan, Ulugh Beg ruled over Sultanate of Turan, known to the Romans as Transoxiana – the land between Central Asia’s two great rivers, the Oxus (now the Amu Darya) and the Jaxartes (the Syr Darya), from his capital of Samarkand. 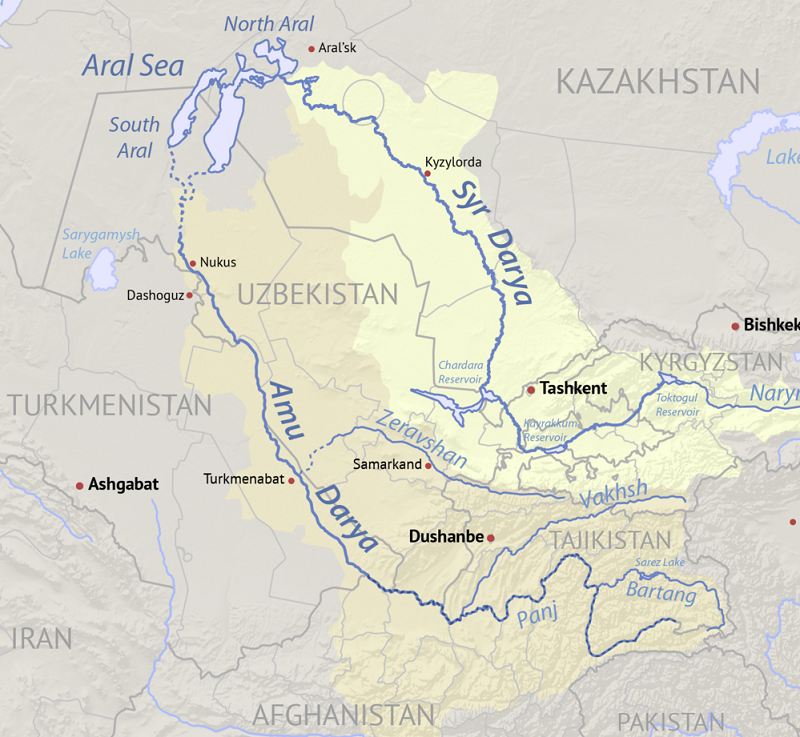 It was in Samarkand, the most fabled oasis of the Silk Road, that Ulugh Beg built his circular observatory, three stories high of white marble.  Here’s the model at the observatory museum: 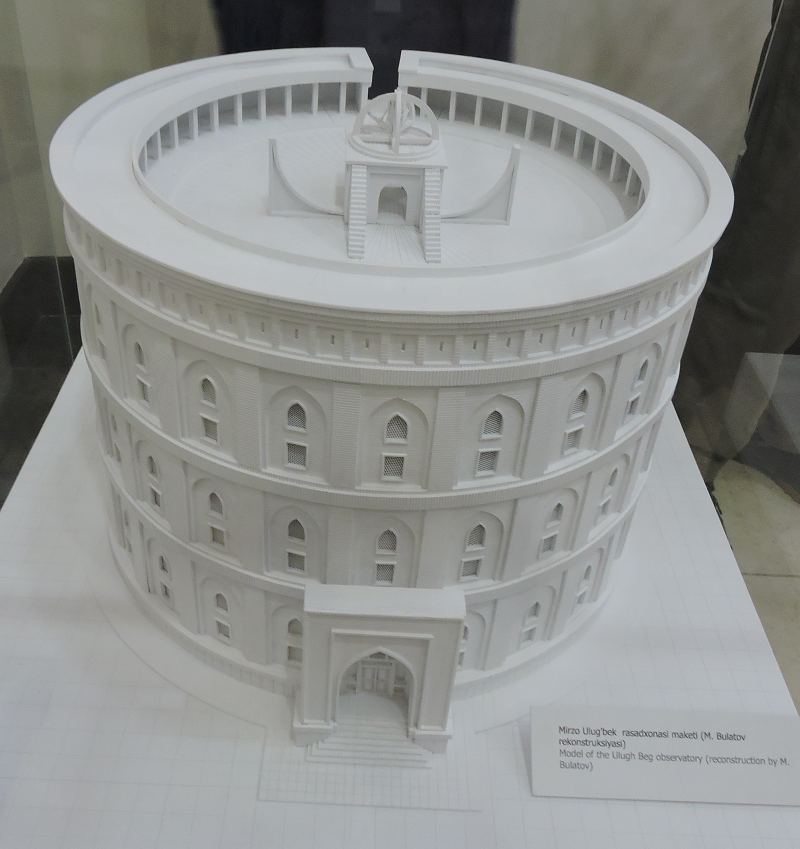 Telescopes wouldn’t be invented for almost 200 years (1608 in the Netherlands).  The observatory’s purpose was to accurately measure the stars, planets and sun with three enormous instruments.

First was a colossal meridian arc called the suds-i-fakhri, the Fakhri Sextant running through the observatory’s center, embedded in an underground trench and reaching the roof for a total radius of 130 feet.  The first photo above is the only remaining section of the sextant, below ground.  Here’s the model. 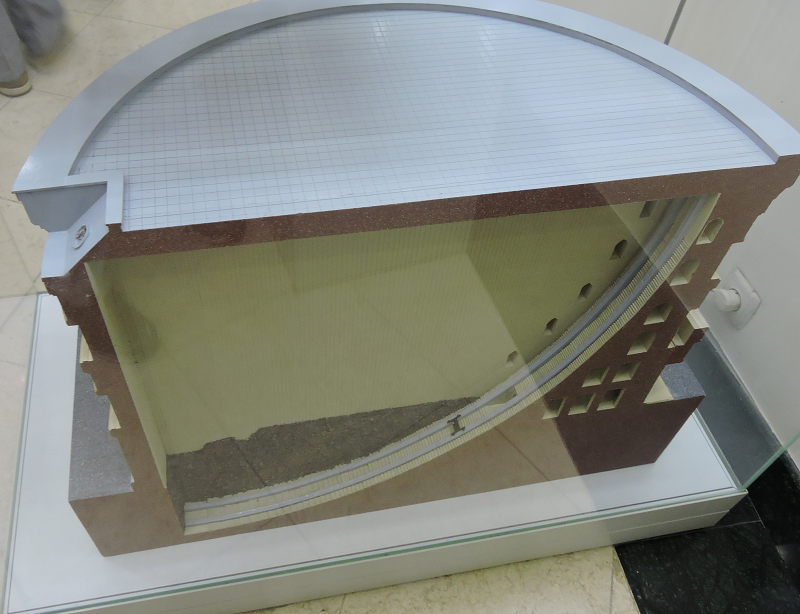 It was placed on a north-south axis.  Light from an object in the sky – planets, stars, the Moon or Sun – passing through a controlled opening would shine on a specific point on the sextant’s curved track with precise gradations of one degree, one minute, and five seconds of arc. 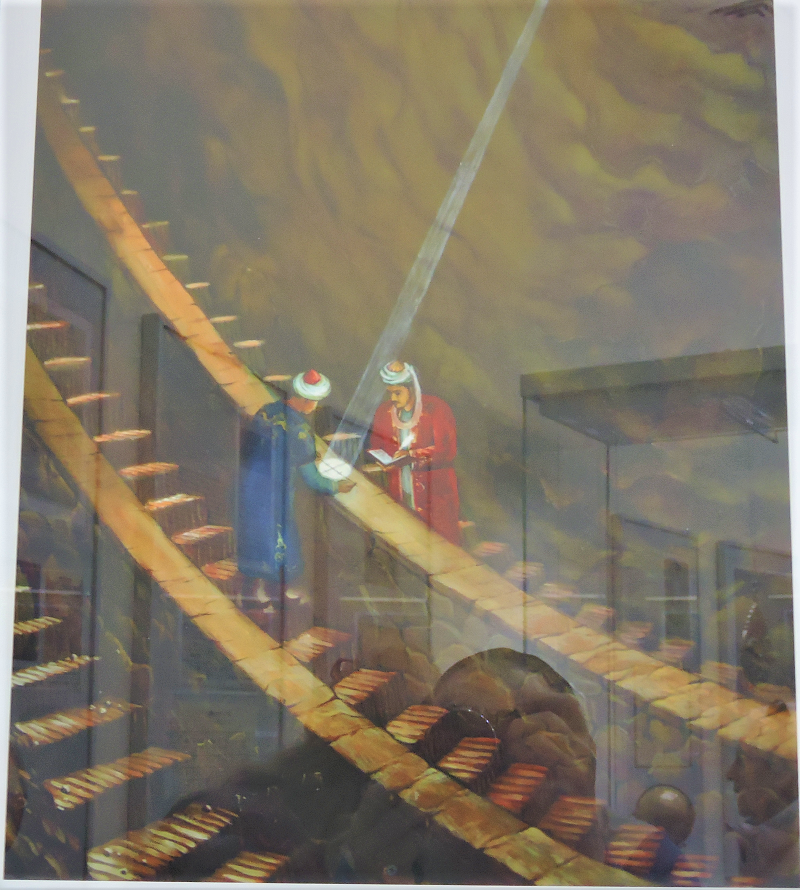 With this instrument, Beg and his fellow astronomers could precisely determine the position of stars and planets through the year, the length of the year, the time of local noon each day, and even the angle between Earth’s rotational axis and the plane of what they thought was the sun’s orbit around the Earth.  (Copernicus wouldn’t explain it was the other way around for another 100 years.)

The second instrument was the solar clock, a portion of the observatory’s interior concave wall built on an east-west axis perpendicular to the Fahkri sextant. This made it a sun dial, as the sextant provided the gnomon or moving shadow telling the time. The third instrument was the ustuvan, which was a rotating quadrant sector.

All this enabled the astronomers of Ulugh Beg Observatory to measure the length of the year to within 25 seconds of the actual value, and determine the axial tilt of the Earth so accurately that their number falls within today’s accepted range of values. They were able to accomplish what they did because the meridian arc was the largest instrument of its kind ever built.

With such great size, the meridian arc could achieve a resolution of one six-hundredth of a degree, which is equivalent to the size of an American penny viewed over a half a kilometer away.

It also enabled Ulugh Beg to compile a star catalogue containing at least 1,018 stars and their precise locations in the night sky. Truly astounding.

The Observatory is not all Ulugh Beg built.  While all that’s left now is the gate and cover over the below ground sextant: 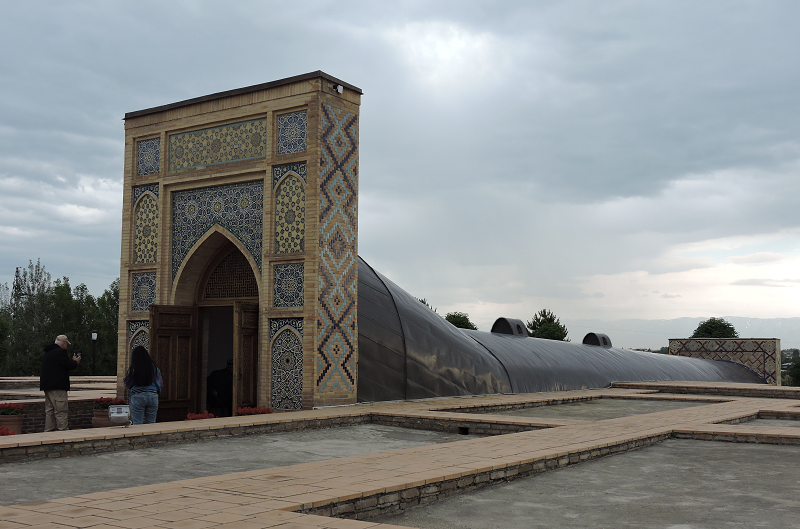 He also designed and had constructed a magnificent medrassah or school where he and his fellow scholars taught astronomy and mathematics, such as geometry and trigonometry to students all over Central Asia. 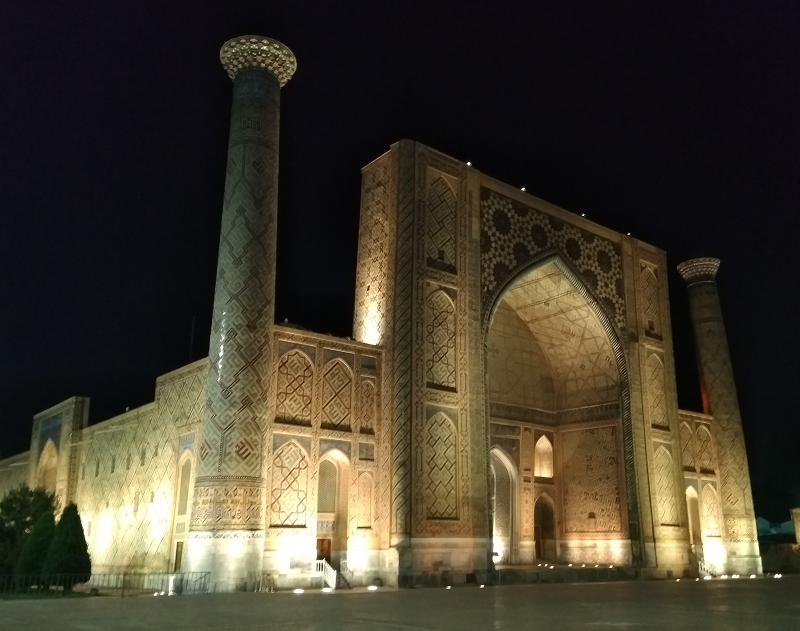 The Ulugh Beg Medrassah (on the left) forms part of Samarkand’s famous Registan.

What you have learned and seen here is but one example of what awaits you in exploring Central Asia.  This September will be our third Wheeler Expeditions Mystery of Central Asia Expedition.  Joining me and your fellow TTPers will be an enrichment of your life beyond description.

Click Wheeler Expeditions Mystery of Central Asia Expedition, then on “Click Here for Info and Details” – no sign in or email required.  Look at what we do and where we go – then please consider being a part of this.  After our third time, we may never offer it again.

Life really is short – believe me, at my age, I know.  Carpe diem is for real.  See you at the Registan.