2 The Point News » Kelly's Panorama » Members Only » THE SPYGATE STORM 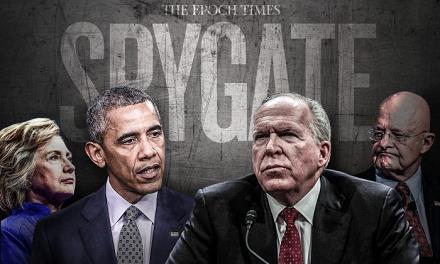 Stunning Spygate revelations will drop before the end of the year, the rapidly accelerating amount of seemingly unrelated stuff being made public now inclines me to believe.

Here’s what I conclude from Jeff Carlson’s masterful exposé in the Epoch Times (11/28): Spygate: The True Story of Collusion. How America’s most powerful agencies were weaponized against President Donald Trump.

And from Dan Bongino’s bestseller:  Spygate, The Attempted Sabotage of Donald Trump  As well as my own sources..

Liberals will be shocked, because they’ve been grossly misled by the Lying Swine Fascist Media, and logical thinking isn’t their long suit.

Many conservatives who think they’ve been paying attention also will be surprised. Then again, maybe not.

Internet sleuths have identified parts of the Spygate elephant, but no one on the outside has a complete picture of the whole beast. It’s easy to get lost in the weeds, to exaggerate the importance of some things, to overlook the significance of others.

Intelligent conservatives who follow current events (the very definition of TTPers!) know the Lying Swine lie. But sometimes we forget that, let our perceptions be shaped by “news” from unreliable sources.

We’ve leapt to conclusions based on incomplete, often inaccurate information, been slow to let go of assumptions when new facts come to light.  Some conservatives seem to think that if it hasn’t been in the news, nothing is happening.

And, as Will Rogers said, it isn’t what we don’t know that hurts us. It’s what we “know” that isn’t so.

With the caveat this is a SWAG (Scientific Wild-Ass Guess) from an outsider, here’s what I think we’ll learn by year’s end:

(1) Uranium One was the genesis for Spygate.

But the most important part of Uranium One began in Kazakhstan, five years before, Jeff Carlson and Steve McIntyre explain here and here.  The connection between Kazakhstan and Hillary’s sale of US uranium to Rosatom is explained by Andrew McCarthy in: The Obama Administration’s Uranium One Scandal.

Uranium One is rooted in the insatiable greed of grifters Bill and Hill, who took bribes in three principal ways:

*Via donations to the Clinton Foundation, set up under the guidance of corrupt financier Marc Rich, pardoned by Bill on his last day in office. (The pardon was approved by then Deputy Attorney General Eric Holder.)

*Via donations to the (now defunct) Clinton Global Initiative.

*Via bloated speaking fees paid to Bill while Hillary was Secretary of State.

(2) Uranium One can’t be understood, investigated, explained or prosecuted without reference to the Clinton Foundation, and vice versa.

The purpose of U1 was to enrich Bill, Hill and other prominent Democrats. The means by which that was accomplished was by laundering bribes and payoffs through the Clinton Foundation and other phony charities.

Chiefly Canadian charities, because under Canadian law, charitable foundations need not disclose the identity of their donors. So Russian oligarch A, Iranian mullah B, or Arab sheikh C could give tons of money with no public record of it.

Money flowed to the Clinton Foundation at each critical step in U1, chiefly from Canadian investor Frank Giustra, who owned the predecessor company.  Giustra and his foundation donated more than $100 million from 2005 on.

Virtually every senior Obama administration official sat on the Committee on Foreign Investment in the United States, which in October, 2010 unanimously approved the sale of Uranium One to a Rosatom subsidiary.

Russia was aiding the Iran nuclear program, the FBI knew at the time of the U1 sale. Obama administration officials vehemently denied any American uranium went to Iran.

But in 2011, Obama removed Rosatom from a list of restricted companies that could not export nuclear material without special permission. Subsequently, yellowcake from Wyoming was shipped to Canada, then to Europe, from whence there is no public record of its final destination..

(3) The Iran deal was so outrageously bad that some think Obama pressed so hard for it because the Russians and the mullahs were blackmailing him over fallout from the Uranium One deal. This is plausible, could also explain Zero’s flip flops to appease Syrian dictator (and Russian puppet) Bashir Assad.

This threat from Iran’s foreign minister indicates Obama officials – and maybe Zero himself– got kickbacks from the pallets of cash they shipped to Iran. Once they took bribes, the mullahs owned them.

(4) With uranium from Uranium One going into the Iranian nuke program, and pallets of cash being sent to the world’s foremost sponsor of terror, we’re not talking just about major felonies. We’re talking about treason.

That’s why Zero, the Clintons, and their minions took such desperate measures to stop Trump. Hillary had to win to keep a lid on the scandals.

Efforts to keep the lid on included illegally rummaging thru NSA intercepts on Trump campaign officials (which NSA Director Admiral Mike Rogers shut down in April of 2016), and, also illegally, “unmasking” them.

Some thought to be villains aren’t. More about that later.

*Steele was working for Deripaska at the same time he prepared his phony dossier.

*Dirty former FBI Deputy Director Andrew McCabe has connections to Deripaska. So does Robert Mueller.  A must-read here is The Hill’s John Solomon reporting: Mueller May Have a Conflict – and It Leads Directly to a Russian Oligarch.

*Manafort worked for Deripaska for more than a decade. He pitched Deripaska on a plan to shape political events across the U.S. to “greatly benefit the Putin government.”

Through Ohr and David Laufmann, another DOJ official, Waldman tried to negotiate a deal to deliver Wikileaks founder Julian Assange into U.S. custody.

“This guy is going to do something catastrophic for the Dems, Obama, (Brennan’s) CIA and national security,” Waldman said in an email to Warner.

*Manafort also tried to broker a deal to bring Assange to the U.S., evidently on behalf of China. Deripaska is connected to the Chinese company that offered to bribe Ecuador to cut Assange loose.

Jeff Carlson has more here and here about Deripaska, Manafort, Waldman, and Assange.

Other Russians with whom we’ll become more familiar are Konstantin Kilimak, a former translator for the GRU (Russian military intelligence), who worked for both Manafort and Deripaska, and Rinat Ahkmetshin, a former GRU officer turned lobbyist.

Ahkmetshin evidently was the source for most of the crapola in the Steele dossier. He attended the infamous Trump Tower meeting the Lying Swine claim is “proof” of Trump “collusion” with Russia.

Ahkmetshin worked with Kilimak in Ukraine for Russian stooge Viktor Yanukovich, for whom Manafort also toiled. Mueller is investigating another Ahkmetshin client, a phony foundation funded by Russian oligarchs.

These and other Russians involved in Spygate have ties to Bill, Hillary, Obama, Warner and other prominent Dems.

“Somebody running for president in the 2016 elections was an agent of the Russians,” says Brian Cates. “It just wasn’t Donald Trump.”

Lock her up.  That’s the least we can do.  We used to hang traitors by the neck until dead.

Jack Kelly is a former Marine and Green Beret, and was the Deputy Assistant Secretary of the Air Force during the Reagan Administration.  Until his retirement last year, he was the national security writer for the Pittsburgh Post-Gazette