THE SOULLESS SOCIOPATH IN THE WHITE HOUSE 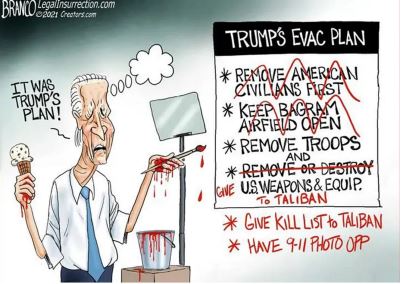 Our hapless president’s speech yesterday (Tuesday 8/31) was not a speech at all. It was a full-blown childish tantrum.

While he was ostensibly celebrating his massive “airlift” of thousands of mostly Afghan refugees, from the beginning, it was clear he is extremely angry. He almost shouted his claim that his catastrophic misadventure in Afghanistan has been a “historical” achievement. This is a huge lie, and everyone knows it, even those trying to spin this debacle as a win.

The New York Post this morning (9/01) put it this way: With Americans, Allies Left Behind, A Clueless Biden Declares Afghan Mission ‘Extraordinary Success’ –

“What a slap in the face to the families of the 13 American service members and hundreds of civilians who died last week when the Taliban let a suicide bomber through their checkpoints outside the Kabul airport.

Clearly angry that any dare criticize him, Biden showed no remorse, admitted no real responsibility. Instead, he resorted to the same tired talking points and weird non sequiturs he’s trotted out for two weeks to explain once again why he had no regrets about his ‘wise decision’.”

In fact, Biden’s surrender has probably set a genocide in motion, just as our betrayal of the South Vietnamese gave birth to the killing fields. Women and girls are sure to be brutalized.

Biden had promised for days that no American would be left behind but, of course, hundreds, perhaps even thousands, have been left behind. Some even made it to the airport and were then denied flights home by U.S. forces on the ground there.

Thousands of those who escaped were rescued not by Biden’s forces, but by retired vets and private organizations who set out to do what the government would not.

Biden is, and has always been, a pathological liar of the worst kind, the kind who lies to boost his own ego, no matter how easy it is to prove his dishonesty.

His seething, wretched defense of his own massive failure will haunt this nation for decades to come. He has singlehandedly created a fully armed terrorist state, a state surrounded by enemies of the U.S. — China, Iran, and Pakistan. Those countries now have access to $90 billion worth of American weapons, military vehicles, and aircraft, not to mention Bagram Air Base.

Our NATO allies will no longer trust us. Biden will be forever known as the most destructive, the weakest, and the most gullible president in U.S. history. A better man would resign, but Biden is not even a decent man. As his mad rant on Tuesday proved, he will never take responsibility for his fatal errors in judgment.

Biden blamed President Trump, whose actual plan had stabilized the country and would have worked if implemented, and he blamed the Afghan army, whom he betrayed by withdrawing their air support and their financial support. Of course they fled. Biden betrayed them as cruelly as any leader in history has abandoned his troops and allies.

He can claim that his decision to withdraw as he did was successful from now to kingdom come, but it was the most egregious foreign policy error in American history.

The deaths of those thirteen young soldiers who died last Thursday (8/26) is entirely his responsibility, yet he could not even bring himself to salute at their dignified transfer as their coffins passed by; he just checked his watch as if he had somewhere more important to be. The man is without heart and soul. The few parents who spoke with him were shocked that he talked only about his deceased son Beau. That’s his go-to default reply to anyone else’s loss; he makes it all about him.

As the months of his administration slip by, it becomes clearer and clearer that he is a sociopath (see link for definition, personality traits and behavioral patterns).

Redstate’s Nick Arama agrees. Biden is congenitally unable to care. As for Americans still stranded in Afghanistan, he blamed them — for not getting to the airport, for being “dual citizens,” as if that makes them less worthy of rescue.

Yet it is not just Biden who is to blame. Those military clowns, the ones who just weeks ago were telling us that COVID was the gravest threat we face (Lloyd Austin) or that “white rage” is worth investigating (Mark Milley), are to blame as well. Whoever was giving the orders on the ground in Kabul should also be fired.

Who thought it was a good idea to have those young soldiers do crowd control in a sea of panicked Afghans? Who decided those busloads of Americans had to be turned back in favor of unvetted refugees? Whose decision was it to let the highly trained military dogs who were brought safely to the airport be left behind, turned loose to face certain death in the streets of that benighted city?

Every leader who participated in this ill-timed, fateful attempt at withdrawal should resign or be fired. As many observers have noted, a high-schooler could have managed it all better.

But then maybe it was all by design, engineered by Biden’s paymaster, Communist China. Biden has been bought and paid by a long list of influence-purchasers for nearly all his years in Congress. “Selling out is usually more a matter of buying in. Sell out, and you’re really buying into someone else’s system of values, rules and rewards” (Bill Watterson). Biden sold us out long ago.

Nancy Pelosi, a horrid woman equally without heart and soul, on Tuesday refused to have the names of the thirteen soldiers killed in Kabul read out on the floor of the House.

That should permanently indict her for being the wicked witch she is. She is more devious, more calculating than the irresponsible Biden but every bit as beyond redemption as he is. She will do anything to convince the American people, for whom she has only contempt, that whatever she and her party do is righteous no matter how loathsome and totalitarian.

Like the schoolyard thug he is, Biden will defend to the death the treacherous plan he put into motion so he could make a grand speech on the twentieth anniversary of 9/11. He ignored the advice of some advisers, wanted Ghani to lie about the Taliban’s success in July (transcript here), all to mount a bit of theater with him in the starring role.

No matter what he says, things did not go as he envisioned, so, like a spoiled child, he threw a tantrum from the podium at the White House. Shame on him a thousand times. 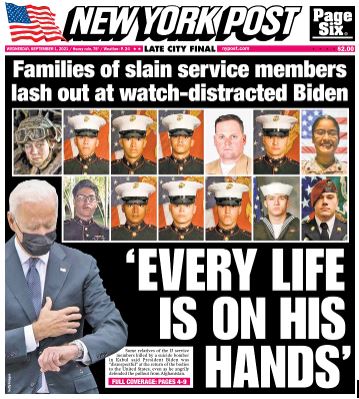 ***Important message to all TTPers*** As you know, TTP is a private membership with no advertising.  We operate on a minimal budget and haven’t raised the cost of membership in 18 years since TTP began in March of 2003.  The only way we can grow – and cover growing expenses – is by word of mouth by TTP Members.  If all TTP Members could convince, persuade, or cajole one friend a month of the unique value of TTP for their perspective and understanding of what’s going on in the world now, it would b of immense help to us.  May I ask you to do that?  Thanks!  Jack Wheeler