Tirana, Albania.  Let’s say you’re an Albanian.  You idolize America because Albania is the most pro-America country in the world.

You have a choice to vote for who will lead your country – a man whose hero is President Trump, or a man who despises him; a man who embraces America’s core values of individual liberty, honest work, and moral integrity, or a man who is corrupt to the core, who is deeply in bed with the drug-running mafias that control much of the economy, and whose hero and mentor is George Soros.

Look at the two pictures above.  Who would you vote for?

The election was on Sunday (6/25).   On Monday (6/26), the government here in Tirana announced that Edi Rama, the corrupt protégé of Soros, had won in a landslide, the voters humiliatingly rejecting Luli Basha, who embodies America’s values.

How could this be?

Because George Soros’ people in the US State Department enabled Rama to buy the election.

Albania during the Soviet era was the most horribly tyrannical Stalinist state in the Soviet Empire.  When the empire collapsed in 1991, the ruling Communist Party changed its name to the Socialist Party led by a protégé of George Soros named Fatos Nano.  With Soros money and vote buying, Nano was elected Prime Minister in 1991.

In 1998, Nano was again Prime Minister, and Soros asked him a favor – to promote a 34 year-old failed artist and basketball player he was mentoring named Edi Rama as Minister of Culture.  From there, Soros was able to springboard Rama into being elected Mayor of Tirana in 2000 and kept there until he was defeated by Luli Basha in 2011.

Rama was so devastated by his defeat he retreated to Soros’ palatial estate in Katonah New York.  He stayed there almost a month while Soros personally consoled him, promising he would get him back in power.

One of the ways Soros did it was to use via cutout third parties an obscure Albanian-American limo driver in New Jersey, Bilal Shehu, to donate $70,000 to Obama’s 2012 election campaign.  This got Shehu invited to attend an Obama fundraiser in San Francisco with Rama in tow.

But Rama was not on the guest list.  Shehu inveigled Obama to step outside the event into the foyer just to shake hands with his friend.  Obama shook Rama’s hand with a smile and quickly left.  The interaction lasted maybe ten seconds – long enough for Rama’s photographer to get this picture: 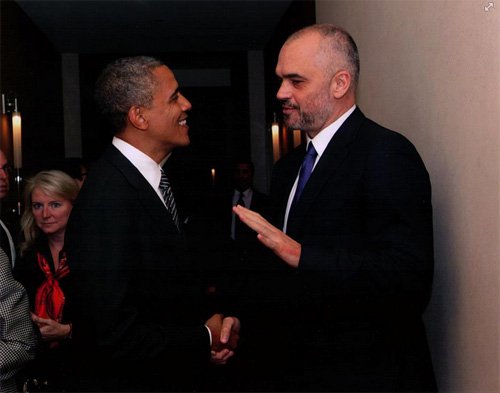 This picture got Rama elected Prime Minister of Albania in 2013 – for he relentlessly used this photo to pretend he was best buds with the President of the United States who personally supported him.

For the past four years, it has become blindingly clear who Rama’s best buds were, in addition to Soros and his acolytes in the State Department:  the mafias that controlled Albania’s marijuana plantations and smuggling.

Since Rama’s election in 2013, Albania has become the “Cannabis Capital of Europe”, a multi-billion dollar industry run by organized crime.  These billions buy the police and judges, get criminals elected to Parliament, and it’s all okay with Rama – for he’s not only bought and paid for, but so are his voters.

The economy sucks,  as the drug kingpins and their puppet politicians insert themselves into everyone’s business – you have to pay them bribes to get anything done.

From Cannabis to Corruption in Albania is just one of the many stories in the established European press recently.  Albanian police, it notes, refuse to arrest the country’s principal drug kingpin Klement Balili, known as the “Pedro Escobar of the Balkans.”  Further:

“Billions of euros generated by trafficking will fund the upcoming June parliamentary elections. Worse still are reports that exponents of organized crime groups have strong political ties with the government and have received assurances that their activities will not be targeted – in exchange for election campaign funding.”

And what is our government, our State Department, doing about this?  Nothing, for it is on Rama’s side.  The most hated man in Albania by anyone who is not on Rama’s payroll is US Ambassador to Albania Donald Lu.

He injects himself into court proceedings, parliamentary hearings and meetings to which he has not been invited, attacks Albania’s Attorney General for not doing his bidding, and takes Rama’s position on anything and everything.  The last thing in the world he would do is acknowledge Rama’s corruption and drug connections.  Lu is George Soros’ personal stooge in Albania.

Last February, Attorney General (or General Prosecutor) Adriatik Llalla couldn’t stand Lu’s insufferable meddling and demands, and held a press conference denouncing him.  He accused Lu of trying to run the General Prosecutor’s office, of blackmailing him to stop legitimate investigations by denying him a visa to the US, and of exerting “typical Sorosian pressure” to do his bidding.

“Sorosian” means “by George Soros.”  The Soros State Department of course issued a statement of support for Lu.

On March 27, Luli (full name Lulzim) Basha was interviewed by Breitbart.  The headline was: Albania’s Soros-Affiliated Prime Minister Is Ruining Our Country.  As the leader of the anti-Socialist pro-free market Democratic Party, he was quoted:

“Albania is in a unique and difficult situation, in a political crisis, the results of a full onslaught of organized crime on all state structures, on the rule of law, and democracy.

The problem of collusion between politics and crime is not new to the Balkans.  But the unique problem for Albania is the outright promotion and presence of people with terrible criminal records, convicted in European Union states for offenses, such as drug trafficking, prostitution, human trafficking and other organized crime offenses.

They and their criminal activities have been given immunity by the regime of Edi Rama, who in turn is protected by George Soros as Rama is Soros’ primary investment in the Balkans. I in turn have been viciously attacked by Soros organization smears and also the international media because I am a Trump supporter.

Meanwhile, Edi Rama, a board member of the Soros Foundation in Albania, is the most adamantly anti-Trump leader in Europe.  At the request of Soros, Rama went on CNN to say that the prospect of Trump as president was ‘frightening’ and a ‘shame on our civilization’.”

That CNN interview was during the campaign last April.  Here it is:

I came here to witness the end of the Sorosian ruination of this beautiful country, the end of Rama’s criminality and corruption, the renewal of Albania’s freedom and prosperity.  There was simply no way the Albanian people would want anything otherwise.

I was wrong.  The bribes of countless millions in drug and Soros money was simply too massively widespread to overcome.

The Albanian people have allowed themselves to be bribed into ruining their own country.  It will sink into a Socialist pit of crime, corruption, and poverty – except for the criminal and government elites who will live very large.

It’s a sad familiar tale – one for which our State Department bears significant responsibility.  The acolytes of George Soros remain entrenched there, whom T-Rex has been unable to uproot.

Maybe someday he will do so.  But any effort of his will have come too late for Albania.