THE SCHNEIDERMAN SCANDAL SHOULD BE A SPIRITUAL CRISIS FOR DEMOCRATS 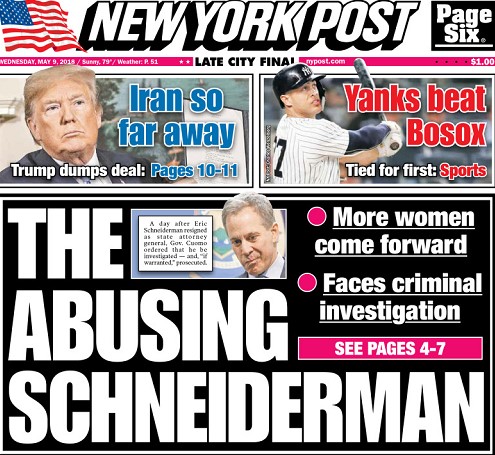 “What did they know and when did they know it?” and “It’s not the crime; it’s the cover-up” are two of the biggest journalistic clichés of our time.

But clichés or not, sometimes they are true and they both apply (and then some) to the astonishing Eric Schneiderman situation.

This appalling scandal  should be nothing less than a spiritual crisis for the Democrat Party and so-called liberals and progressives everywhere.

It should.  But it probably won’t be, even though the level of hypocrisy is stratospheric.  And that is the essence of the problem.

When The New Yorker published the report that the New York state attorney general was a serial batterer — indeed a batterer who seemed to prefer beating women to having sex with them – a genuine sociopath in the position of New York’s highest law enforcement official — the AG was defenestrated from his post by Governor Cuomo in the proverbial (apt in this case) New York Minute.

But the initial question immediately arises.  Since now six women (the NY Post has the latest per the cover story above) have reported near identical pathologies on the part of Schneiderman.

Didn’t anyone know about this?

Donald  Trump clearly had a suspicion. In September 2013, Trump tweeted, “Weiner is gone, Spitzer is gone — next will be lightweight A.G. Eric Schneiderman. Is he a crook? Wait and see, worse than Spitzer or Weiner.” 2013 – almost five years ago!

Was Trump alone?  Hardly likely.  And yet the man who suddenly was revealed to be quite literally a human monster, who evidently passed on his proclivities to his daughter, was supposedly a surprise to the good people (read: liberal bourgeoisie of NYC).

The man who led the charge against Harvey Weinstein turned out to be as bad, or possibly worse, if that’s possible, than Weinstein himself.

And you’re telling me haute New York did not know about this, just as so many in Hollywood “didn’t know” about Weinstein?  Well, in that case, I have  a Brooklyn Bridge to sell you.

And as an ex-liberal, I will add that liberalism has a serious moral and spiritual crisis to confront because this man was protected for all the wrong reasons.

The people who cosseted him for so long — women and men, they all know who they are and some are undoubtedly in very high places — did so because they thought he was on the “right side” of things.

Not only is that a weasel-like version of the ends-justify-the-means (he opposed Trump, didn’t he? That means he can do anything he wants), it’s a form of blindness about what the “right side” really is.

The cause — whatever that is because nobody really remembers — is bigger than the man.  So what if he’s a little flawed? (Well, maybe more than a little.) As I said, the ends justify the means.

But not even Marx advocated beating women and threatening to kill them if they left him.

Yes, plenty of conservatives and even probably libertarians have done all sorts of bad things to women and others, that members of the clergy have pronounced their undying allegiance to God while performing acts of pederasty and on and on.

But people like Schneiderman are a special case.  He probably thought he was doing so much good in the world that it gave him license to behave as he wanted privately.  The good and bad become almost a yin and yang of each other, inseparable and ultimately indistinguishable, as Norman Mailer wrote, it could happen to police and criminals.

On one level this is Jekyll and Hyde, on another, in Schneiderman’s case especially, it’s moral narcissism gone berserk and taken to a clinical level.

He shouldn’t have been the attorney general of the state.  He should have been in a mental hospital.  Why wasn’t he stopped?  (Broward County anyone?)

It will be interesting to see what happens next, because real journalism would explore who enabled this, who allowed such a person to have such a high position with possibilities (and desires) to go even higher.

This could explain a lot of things, but they won’t be comfortable to liberals and progressives.  How, for example, does a man like the Ayatollah Khamenei become the supreme leader of Iran?

You think that’s unrelated?  I’m sorry.  You are mistaken.

If Democrats and the Leftist Elite had the courage to have a spiritual crisis over Schneiderman, they’d understand the connection.  But they don’t have that courage.  They don’t even have the courage to look honestly at themselves in the mirror.