THE SANDS OF THE TAKLA MAKAN 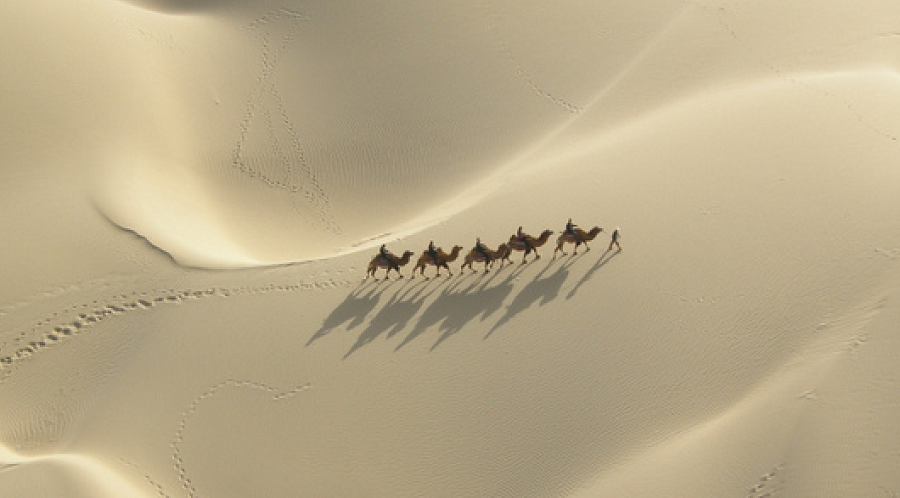 When Marco Polo crossed the Tien Shan mountains and reached the Silk Road oasis of Kashgar in 1273, he faced an enormous desert of endless dunes called the Takla Makan, meaning “You go in, you don’t come out.” To avoid this fate, the Silk Road at Kashgar splits in two – above to the north of the dreaded sand sea via the oases of Aksu and Turfan, and underneath to the south via the oases of Yarkand, Khotan, Charchan and Charklik. The two routes came together beyond Lop Nor, the eastern extension of the Takla Makan, at the oasis of Dunhuang.

His father Niccolo and uncle Maffeo had earlier taken the northern route to first meet Mongol Emperor Kublai Khan, but now with Marco they took the southern route. They traveled in caravans of two-humped Bactrian camels, often crossing dunes on the edge – just like the photo you see. In 2008, I retraced Polo’s route along the southern route – part of it by motorized hang glider. He would be fascinated, I’m sure, to see what a camel caravan looks like from the air! (Glimpses of Our Breathtaking World #13 photo ©Jack Wheeler)