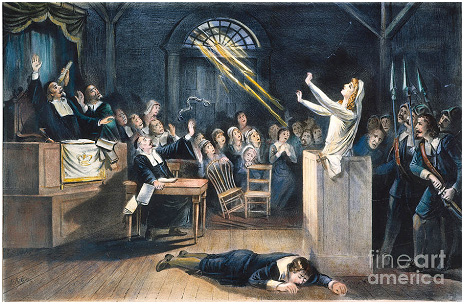 That was testimony from witnesses—either malicious or hysterical—who claimed the accused had assumed the form of a black cat or some other devilish creature and had come visiting in the night in order to torment the witness with bites and scratches, or to rearrange the bedroom furniture, or to send the baby into paroxysms.

Susannah Sheldon, aged about 18, testified that the defendant Sarah Good’s apparition—not the actual Sarah Good, but her spirit, her specter—“most violently pulled down my head behind a chest and tied my hands together with a whale band and almost choked me to death.” Other witnesses blamed Good for the mysterious deaths of cows or for causing a broom to fly up into an apple tree.

The judge, William Stoughton, admitted this nonsense into evidence. Hysterical fantasies had real consequences: Sarah Good and four other defendants were hanged on July 19, 1692.

Three hundred twenty-six years later, an anonymous woman—a spectral and possibly nonexistent woman, for all that one knew when the story emerged—accused Brett Kavanaugh of sexually assaulting her 36 years ago, when he was a high-school student.

It seemed as if the American constitutional process might be drawn back to the three centuries-old neighborhood of Salem, Mass.

According to this phantom testimony, 17-year-old Brett held the girl down, pawed her and tried to force himself upon her, and held his hand over her mouth when she screamed, until a second prep-school devil piled on top, they all tumbled to the floor, and the girl managed to slip away. The boys were “stumbling drunk,” according to the account.

You were supposed to feel the sudden wind-shear of hypocrisy.

The nominee was a seeming paragon—perfect father and husband and coach of his daughters’ basketball teams. He is a Roman Catholic with an Irish name, but now the script became as gleefully Calvinist as a Hawthorne tale. What imp of hell had possessed the Kavanaugh boy? The Protestant tale seemed to obtain subliminal verification against the background of Catholic sex-abuse scandals.

Thus the constitutional process takes on an aspect of the 21st-century medieval.

The accuser’s story first emerged in a letter that came into the hands of California Sen. Dianne Feinstein. Ms. Feinstein brought it to light only after the Senate Judiciary Committee’s hearing, which featured somewhat Salem-like drama—costumed apparitions from “The Handmaid’s Tale” arranging themselves outside the committee room; inarticulate background screams of people being led away for disrupting the proceedings.

It seemed as if Ms. Feinstein, not liking the odds of defeating Judge Kavanaugh’s confirmation, had found a devilishly clever way to head it off after all.

But then the accuser materialized, in the form of a 51-year-old California professor of clinical psychology, Christine Blasey Ford.

What to make of it now? The tale became less spectral.

Still, there had been no police report, and there were no witnesses. The second boy allegedly in the room said he had no memory of such an incident and called the accusation “absolutely nuts.” Judge Kavanaugh flatly denied it. Her therapist’s notes from 30 years later are not objective reporting, merely a transcription of what Ms. Ford herself said.

The thing happened—if it happened at all—an awfully long time ago, back in Ronald Reagan’s time, when the actors in the drama were minors and (the boys, anyway) under the blurring influence of alcohol and adolescent hormones. No clothes were removed, and no sexual penetration occurred. The sin, if there was one, was not one of those that Catholic theology calls peccata clamantia—sins that cry to heaven for vengeance.

The offense alleged is not nothing, by any means. It is ugly, and stupid more than evil, one might think, but trauma is subjective and hard to parse legally. Common sense is a little hard put to know what to make of the episode, if it happened. The dust of 36 years has settled over the memory. The passage of time sometimes causes people to forget; sometimes it causes them to invent or embellish.

Invention takes on bright energies when its muse is politics, which is the Olympics of illusion.

Inevitably, people will sort the matter out along mostly partisan lines. A lot will depend upon the testimony of Ms. Ford, who has volunteered to appear before the Senate Judiciary Committee. If the Left expects a windfall from all this in November, it may find itself instead the victim of a terrific backlash.

These are part of the 21st century’s strange sectarian struggles. In another Senate hearing a year ago, Ms. Feinstein addressed Amy Coney Barrett, a Notre Dame law professor, about her nomination to the Seventh U.S. Circuit Court of Appeals. Ms. Feinstein began fretting earnestly about the nominee’s Catholicism. “The dogma lives loud within you,” the senator told the professor—an oddly mystical locution.

But 21st-century progressivism is also a religion—a militant faith, a true church in nearly all important respects.

It is a community of belief and shared values, with dogmas, heresies, sacraments and fanatics; with saints it reveres and devils it abhors, starting with the great Satan Donald Trump.

If religion were to disqualify a Catholic from public service, it would logically have to disqualify a practicing progressive, who is the creature of a belief system that is, on the whole, considerably more dogmatic than the one with headquarters in Rome.

Lance Morrow is a senior fellow at the Ethics and Public Policy Center, and a former essayist for Time.