THE ROCK SELLS HIS SOUL TO CHINA 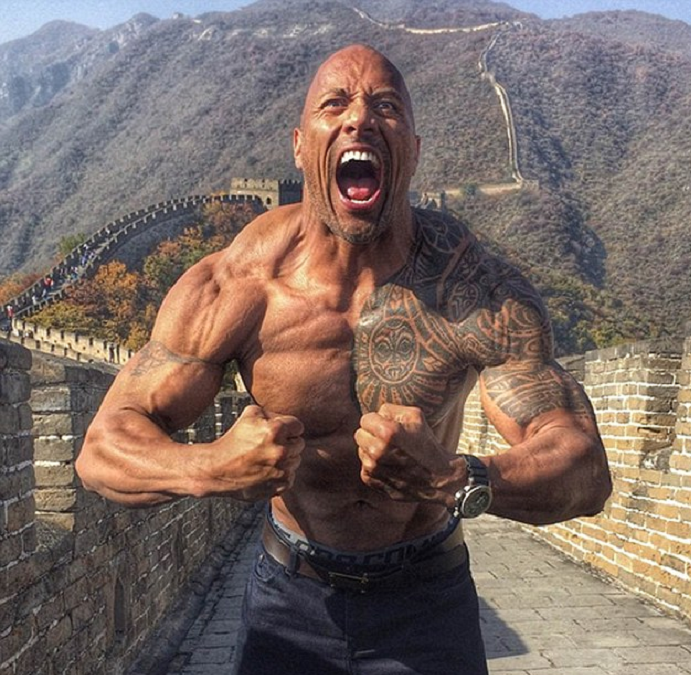 In a seven-minute video pinned to his Facebook profile, “The Rock” explained, “In this critical election, I believe Joe Biden and Kamala Harris are the best to lead our country, and as my first ever (public) presidential endorsement, I proudly endorse them for the presidential office of our United States.”

From reading through what are now over 100,000 comments in response to Johnson’s Facebook post, it’s clear at once that Johnson’s endorsement backfired. There are almost no comments supporting his decision. Roughly 95 percent of the comments are expressions of anger and feelings of betrayal.

Perhaps Johnson has laid an egg. Perhaps he didn’t know his fans at all.

Or perhaps he didn’t care about his American fans.

There’s a truism in the world of finance: “past performance is no guarantee of future results.” But if you’re Dwayne Johnson, or Lebron James, or countless other luminaries of sports and screen, you’ve put that time-tested wisdom aside in a mad dash after the Chinese market.

Never mind the slow but relentless inertia of history, and the inevitable clash it portends between the United States and China. If all you’re paying attention to is recent results and trends, the future for motion pictures, sort of like the future for professional basketball, is not in America, but China.

A look at some of the Rock’s blockbusters over the past decade suggests the real reason he’s endorsing Biden. He wants to please his Chinese partners.  As Trump says, the Chinese have bought and paid for Biden, who will be their blackmailed puppet.  Want to sell your movies in China, Mr. Rock-o?  You will now endorse who we want.

It’s not just movies where the approval of the Chinese regime is critical to Johnson’s financial success, but also to smooth the way for sales of his new brand of tequila. Launched earlier this year, Johnson’s “Teremana” tequila is attacking a sleeping giant, the Chinese market for tequila.

Despite being heavy drinkers, the Chinese are just beginning to discover tequila. It is outsold by most all other imported Western spirits, with whiskey selling 10 times as much into the Chinese market as tequila. After a sustained marketing effort by tequila distillers, however, China is now considered the next big market. And who better to introduce tequila to the Chinese consumer than Dwayne Johnson?

Don’t rock our boat, Mr. Rock. Never mind Hong Kong, Tibet, Inner Mongolia, Xinjiang, the South China Sea, the Silk Road debt traps, or the COVID bug. And never mind the overwhelming (and overwhelmingly unhealthy) influence Chinese money is having in almost every U.S. institution from academia and media and Big Tech to Hollywood. There’s money to be made.

The Trump era has made it clear to ordinary Americans that their own national elite has turned on them, and considers them disposable.

If you care about American jobs, American manufacturing, American culture, or staying out of endless wars, the almost universal opposition to President Trump by America’s elite institutions has made the situation crystal clear: You don’t matter.

Johnson joins an ignominious list of celebrities who have decided to betray their longtime fans by declaring their opposition to President Trump. Unlike some of his celebrity counterparts—Robert De Niro and Madonna come to mind—Johnson’s declaration of support for Biden at least tried to stay classy.

He spoke of “courage, humanity, empathy, strength, grit, kindness and respect.” He urged everyone to be “kind and respectful to one another.”

This persona, “courage, humanity, strength, grit, kindness, and respect,” is evident in many of Johnson’s better movies: “Walking Tall” (2004), “Gridiron Gang” (2006), and “Fighting With My Family” (2019). It even shows up in his action movie characters.

But that noble persona was shattered the moment Johnson threw in his lot with Biden and Harris.

These two politicians offer nothing to Americans apart from extending the misery we’re seeing in America’s Democrat cities into the rest of the United States. The cold fact that Johnson either ignores or cannot comprehend is that the urban governance model established by Democrats in cities from New York to Los Angeles is unsustainable. It is bankrupt morally and financially.

If Johnson, along with LeBron James and countless other athletes and celebrities, truly cared about America’s underprivileged, he would follow his conscience. He would display true courage, and call for school choice, stronger law enforcement, and make an uncompromising and unrelenting plea to inner city youth to avoid drugs, value education, and above all get and stay married.

Johnson, to his credit, had been doing some of this. But now he has lost credibility. He has endorsed the corrupt racketeers who have destroyed America’s cities, and especially its underprivileged. This is inexplicable—unless you follow the money.

One of the most hilarious, hideous lies in politics today is that Russia constitutes the biggest threat to the integrity of American elections. Russian influence in America is a minute fraction of Chinese influence. China has 10 times the population of Russia; China’s economy is also 10 times bigger. While Russia had a small trade surplus with the United States of $16 billion in 2019, China’s was $295 billion for that year.

Russia cannot buy the United States, but China can.

And that’s exactly what the Chinese are doing. They bought Joe Biden and his family. And now they’ve bought Dwayne Johnson. But past performance is not indicative of future results. China is not destined to rule the world, and while the Chinese market may be the biggest among nations, it will always be only a fraction of the total global market.

The Chinese people comprise 18 percent of the global population, and that percentage is destined to shrink. The Chinese have already alienated huge nations with growing markets—including India, which has a population projected to exceed China’s population within a few years. There are a lot of movie screens in India, too. And perhaps Johnson should ask the family of a soldier recently killed on the Siachen Glacier what they think of his tequila.

What Dwayne Johnson needs to realize is that China may be a great short-term commercial opportunity, but they are headed for the shoals. They are a high-tech police state where a small elite control most of the wealth, and even these elites live in constant fear.

They have alienated every free nation in the world, and the only reason they still get a relative pass in the United States is because crooks like Joe Biden haven’t finished taking their money.

“The Rock” could have kept his political sentiments to himself. Who told him that would not be sufficient? The Chinese Communists, that’s who.

Edward Ring is a senior fellow of the Center for American Greatness. He is a co-founder of the California Policy Center, a free-market think tank based in Southern California.