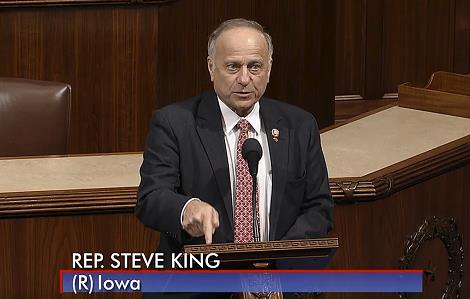 On Thursday January 10, the New York Times ran one of its typical smear attacks on a prominent conservative Republican.  It was as fully dishonest and demagogic as usual, using the GOPer as a foil to smear the President and further the Times’ agenda of destroying our country.

This time the target was Iowa Congressman Steve King, and you can see the real target and the narrative in the headline: Before Trump, Steve King Set the Agenda for the Wall and Anti-Immigrant Politics.

It was a blatantly biased hit piece – immediately apparent in the headline, for “anti-immigrant politics” does not exist, not in Steve’s, not in President Trump’s, not in those of the GOP.  Theirs are “anti-illegal-immigrant politics,” a 180-degree difference that the Slimes purposefully ignores.

Steve made the massive mistake of giving the Slimes a 56-minute unrecorded interview for the story.  After the Times goes on a rant against him and the President with such statements as: “Mr. King… helped write the book on white identity politics that are ascendant in Mr. Trump’s Republican Party,” note how it twists his words:

Mr. King in the interview “said he supports immigrants who enter the country legally and fully assimilate because what matters more than race is “the culture of America” based on values brought to the United States by whites from Europe.

Steve never said “brought to the United States by whites” – that’s the Slimes twisting his anti-racist statement that culture is more important than race into its anti-white racist narrative.  Then the interviewer sandbags Steve by asking him about “white supremacy” in America.  His reply:

“White nationalist, white supremacist, Western civilization — how did that language become offensive?” Mr. King said. “Why did I sit in classes teaching me about the merits of our history and our civilization?”

That’s all the Slimes needed.  Instantly it trumpeted Steve’s quote to every Dem congresscritter’s office and every Hate America Leftie group in the country from ANTIFA and BLM (Black Lives Matter) on down.  Steve’s office was hit with a deluge of condemnation within an hour of the story’s release.  By 11am the morning of January 10, Steve issued this statement:

“Today, the New York Times is suggesting that I am an advocate for white nationalism and white supremacy. I want to make one thing abundantly clear; I reject those labels and the evil ideology that they define. Further, I condemn anyone that supports this evil and bigoted ideology which saw in its ultimate expression the systematic murder of 6 million innocent Jewish lives.

It’s true that like the Founding Fathers I am an advocate for Western Civilization’s values, and that I profoundly believe that America is the greatest tangible expression of these ideals the World has ever seen. Under any fair political definition, I am simply a Nationalist. America’s values are expressed in our founding documents, they are attainable by everyone and we take pride that people of all races, religions, and creeds from around the globe aspire to achieve them. I am dedicated to keeping America this way.

This conviction does not make me a white nationalist or a white supremacist. Once again, I reject those labels and the ideology that they define. As I told the New York Times, ‘it’s not about race; it’s never been about race.’ One of my most strongly held beliefs is that we are all created in God’s image and that human life is sacred in all its forms.”

Steve then went on the Floor of the House the next day, Friday January11, to make this compelling statement:

“In a 56 minute interview [with the New York Times], we discussed the changing use of language in political discourse. We discussed the worn out label ‘racist’ and my observation that other slanderous labels have been increasingly assigned to Conservatives by the Left, who injected into our current political dialog such terms as Nazi, Fascist, ‘White Nationalist, White Supremacist,— Western Civilization, how did THAT language become offensive? Why did I sit in classes teaching me about the merits of our history and our civilization?’…just to watch Western Civilization become a derogatory term in political discourse today.

Clearly, I was only referencing Western Civilization classes. No one ever sat in a class listening to the merits of white nationalism and white supremacy.

When I used the word ‘THAT’ it was in reference ONLY to Western Civilization and NOT to any previously stated evil ideology ALL of which I have denounced. My record as a vocal advocate for Western Civilization is nearly as full as my record in defense of Freedom of Speech.”

You’d think that would take care of it, right?  Of course not, the DemFascicrat condemnation of Steve just got louder as if he had said nothing.

And then the cowardly Republicans got right on board.  As reported by the libtard Des Moines Register reveling in the smear, the next day, Saturday January 12:

“Republican leaders — including Iowa Sens. Chuck Grassley and Joni Ernst — denounced King’s statements. Sen. Tim Scott wrote a Washington Post op-ed about King’s history of racially charged rhetoric and the lack of action by his party to curb it.

‘King’s comments are not conservative views but separate views that should be ridiculed at every turn possible,’ Scott wrote. ‘I condemn Rep. Steve King’s comments on white supremacy; they are offensive and racist — and not representative of our state of Iowa,’ Ernst tweeted.”

The next morning, Sunday January 13, the Associated Press headlined: House GOP leader vows action against Iowa Rep. Steve King over race remarks.  Kevin McCarthy was quoted saying, “Steve’s remarks are beneath the dignity of the party of Lincoln. His language has no place in America. Action will be taken.”

That action came in less than 24 hours when on Monday January 14, by a unanimous vote of the House Republican Steering Committee chaired by McCarthy, Steve was stripped of all his committee assignments.

But that wasn’t punishment enough for Steve’s support of Western Civilization, now transmogrified into support for “white supremacy” by the anti-white racist hate of the Fascist Left.  Oh, no.  McCarthy’s actions just egged them on.

The wording is pathologically dishonest, equating what Steve said to the Times and after with the Left’s strawman of KKK-pro-Nazi racists.

Clyburn’s resolution was brought to the House Floor for a full vote the following afternoon, ereyesterday, Tuesday, January 15. The vote was recorded at 3:26pm:  424 Yes – 1 No.  That one No Vote was by Black Racist Dem Bobby Rush (one of the founders of the Black Panther terrorists in the 1960s), because it didn’t condemn Steve more strongly.

Mark the time and date:  At 3:26pm Eastern Standard Time on January 15, 2019, the Republican Party died – cause of death: suicide.

That includes, by the way, Steve King himself – who voted for his own condemnation (see vote link above).  In the Register’s story, House passes resolution rebuking Steve King after comments on white supremacy, nationalism, Steve is quoted:

“I’m putting up a ‘yes’ up on the board here because what you state here (in the Resolution) is right and it’s true and it’s just.”

What has happened is the complete and total RINOization of the GOP.  It’s no longer Trump’s Party – it has submitted to its master, the Hate-Whites Nazi Racists of the Fascist Left, for whom Whites are the New Jews who must be exterminated.

This Nazi racism of the Left was epitomized by CNN anchor Don Lemon on October 29, 2018, who declared (too stupid to realize the ludicrous hypocrisy of his words):

“I keep trying to point out to people not to demonize any one group or any one ethnicity… So, we have to stop demonizing people and realize the biggest terror threat in this country is white men, most of them radicalized to the right, and we have to start doing something about them.”

You’ve noted I refer to Congressman Steve King simply as “Steve” – because I consider him a friend who I know personally has nothing whatever in common with KKK wackos.  He is an honest decent American patriot and proud defender of Western Civilization under attack by the Fascist Left.

And now the Fascist Left, the black hate-white racists in Congress, the auto-racist white libtard media, the idiot weirdos like Occasional-Cortex, the whole scumbag lot of them are celebrating today their vast victory over our entire culture – making “Western Civilization” equivalent to “Evil White Supremacy.”

From now on, thanks to them and their gutless Republican poodles, no one can defend America’s culture and civilization without being called a “white supremacist.”

Where now do we find an unapologetic champion of the greatest historical achievement of mankind, Western Civilization, and its apogee, America?

Not among Republicans – they’re dead, or enslaved to the fascists.

Historian Will Durant’s epitaph for the great civilizations of history is:

“A great civilization is not conquered from without until it has destroyed itself from within.”

He would now observe that about America.