THE REMARKABLE IRRELEVANCE OF RUSSIA AT DAVOS 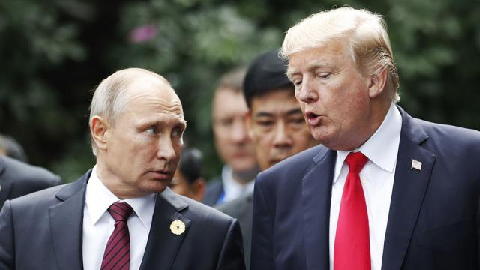 “Sorry, Vlad, but you’re not invited to Davos anymore”

Russian affairs used to attract outsized attention at the annual gatherings of the World Economic Forum in Davos. Not this year.

In Davos last week, the global business elite appeared not to be interested in either the problems or opportunities connected to this troubled and trouble-making power.

Moscow’s delegation of Davos-schmoozing veterans tried to give the Russian question a new spin, but they had next to nothing to say on any of the topics at the focus of this year’s debates: whether it was the fourth industrial revolution, disturbances in world trade, or deepening inequality (which Russia exemplifies) (New Times, January 24).

United States President Donald Trump’s keynote address was the highlight at Davos, and he didn’t even bother mentioning Russia.  Neither did British Prime Minister Theresa May nor Indian Prime Minister Narendra Modi.  No wonder Putin didn’t attend, but sent underlings.

Traditionally, the main theme at Davos has been the future of the world economy. However, Russia’s economy is stagnant, severely affected by corruption and lacking in new drivers (Nezavisimaya Gazeta, January 25). No amount of creative accounting can hide the continuing contraction of Russian real incomes (Gazeta.ru, January 25).

The Kremlin’s instructions to promote import substitution have failed to stimulate any increase in industrial output, and Russia is presently more dependent on petro-revenues than at the start of the decade (Kommersant, January 23).

Moscow has pinned all hopes for an economic recovery on the slight increase in oil prices connected to Russia’s cartel agreement on production cuts with the Organization of the Petroleum Exporting Countries (OPEC). But the fast introduction of alternative energy sources—a key discussion topic at Davos—makes a new slump in the value of oil all but inevitable (Republic.ru, January 25).

For Russia, economic reforms are long overdue; but realistically, Vladimir Putin’s new presidential term will likely bring only a further maturing of crony capitalism.  (Russia’s “election” is next month on March 18.)

Geopolitical risks were also closely evaluated at the World Economic Forum. And it is remarkable that Russia was not included on the Davos list of “five reasons to lose sleep in 2018” (Weforum.org, January 21).

According to this year’s participants, the Ukraine conflict is perceived—perhaps too optimistically—as effectively “frozen,” and the various negotiating channels are considered sufficient to dissuade Moscow from launching a new offensive (Kommersant, January 27).

The violent instability in the Middle East is identified as one of the gravest global security risks, and Russia has made itself a big part of this problem.

A new spasm of the Syrian war recently began with the Turkish offensive on the Afrin enclave controlled by Kurdish forces. Russia has encouraged this escalation, assuming that the quarrel between Turkey and the US (the main ally of the Syrian Kurds), is a net win for its pro–Bashar al-Assad course (Nezavisimaya Gazeta, January 26).

Russia imagines the Turkish setback to US policy, confused as it is, to be insurmountable. Thus, Moscow is not particularly upset about its failure to convene the so-called “congress” of Syrian opposition in Sochi (Newsru.com, January 27).

The next major Middle Eastern cataclysm envisaged by the Kremlin is an escalation of the conflict around Iran, perhaps triggered by a US withdrawal from the Joint Comprehensive Plan of Action on Tehran’s nuclear program; and the main benefit Russia is hoping for is a sharp spike in oil prices.

The economic slowdown increases the urgency for reforms, potentially undercutting the overblown authority of President Xi Jinping (Kommersant, January 12). Moscow, its contrived strategic partnership with Beijing notwithstanding, has no clue how to manage China’s problems.

The Kremlin believes tensions between China and the US will grow further, driven by their geopolitical ambitions even more than trade disputes, citing the recently approved US National Security Strategy as evidence (Nezavisimoe Voennoe Obozrenie, January 26). Yet, Washington and Beijing’s close cooperation in managing the North Korean problem puzzles Moscow—and leaves it on the margins of Indo-Pacific geopolitics (Carnegie,ru, January 16).

It is thus unsurprising at Davos that Russia was left out of discussions about the future of the global system.

The Russian leadership has no interest in thinking about modernization and has effectively cut itself out of dynamics of change, looking increasingly into the past and sticking to the “more of the same” model.

More remarkable is Russia’s irrelevance in discussions on emerging security challenges or international cooperation on the gravest threats to the world’s common future.

In the last few years, Russia has pushed itself into the center of global affairs and now perceives its capacity for troublemaking as the main guarantee of its high international status. Putin has developed a taste for and skill in playing the big geopolitical game with high stakes and risks, so neglect from the planners of the global future undercuts his attempts to embody Russia’s “greatness.”

How then will he react being ignored now?  As he begins his next presidential term after pre-orchestrated elections next month, his only plan for securing the survival of his severely corrupt regime might require the declining Russia to plunge itself into new military adventures.