THE POSTER BOY FOR WHAT’S WRONG WITH OUR CULTURE 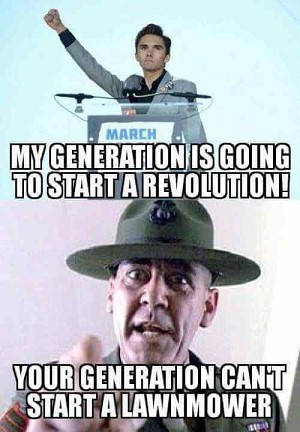 The profane egomaniac whom the Left-media are worshiping at the moment, David Hogg, is the poster boy for the ungracious monsters who characterize a portion of Generation Z, those youngsters born after 2000.

This is the generation that has been the most seriously indoctrinated with leftist ideology rather than actual education.

Given that fact, it follows that they are the least knowledgeable about the Constitution, let alone the rest of American history: the Revolutionary War, the Founding, the Civil War, WWI, WWII, Korea, Vietnam, Iraq, and Afghanistan.

They do not remember 9/11; they know only its aftermath.  They have no memory of what life was like before that day of infamy.  An awareness of terrorism is a sad fact of their lives – if not personally, then on the nightly news from around the world.

At the same time, they are instructed to respect Islam and to condemn us if we utter the truth that terrorism is an Islamic problem.  Young people today are taught to hate Jews and Israel but to love and venerate Moslems.  They are taught to hate men, especially white men, and to revere a host of new gender identifications.

Like the majority of teachers and professors who have indoctrinated Hogg’s generation – one of whom is his mother – Hogg feels justified maligning anyone who disagrees with him.

The kid is such a jerk, such a despicable role model, and yet the Left media cannot get enough of him.

Who among the Baby Boom generation ever gave a thought to suicide bombers or terrorist plots?  Cold War-era air raid drills and earthquake protocols were the only orders of the day.  Hogg is a depressing example of what too many of his generation’s parents have engendered.

This 17 year-old boy is arrogant, rude, foul-mouthed vulgar, and disrespectful to anyone who takes issue with his anti-gun, anti-NRA point of view.

It is of no concern to him that if the armed guard on site had entered the building in which kids were being shot, he might have saved lives.  The deputies who arrived within minutes never entered the building, either.  They were either cowards or ordered to stand down – probably both.  No toxic masculinity on display that day.

Sheriff Scott Israel is the Andrew McCabe of Broward County: a political animal interested only in protecting his job.  That he is still in office is a travesty.

Or consider Superintendent Robert Runcie and the ridiculous-on-its-face PROMISE Program, an Obama-prescribed policy responsible for those seventeen deaths.

But David Hogg, a mindless tool if there ever was one, blames only the NRA, the pre-eminent gun safety organization in the country.

Despite all this, CNN, MSNBC, and PBS have put him up front as a voice of reason to which the rest of us should pay attention.

Meanwhile, contributions to the NRA have spiked.  Hogg is the best public relations voice for the NRA to come along in years.

Of course he knows nothing about the Constitution, the Second Amendment, or why the latter is so crucial to the American idea.  The kid is like an adolescent Obama: all hat, no cattle.  He is full of bluster and fake rage, a self-promoter on steroids.

Given his new celebrity, he probably has armed security everywhere he goes to shout at the rest of us about gun control.  What some real irony?  His father, Kevin Hogg, is a retired FBI Agent.  You can be sure he grew up with guns in his home and a father trained in the safe use of firearms.

Where are his parents now?  Is there no adult in his life who will tell him to stop shrieking like a benighted banshee?  Apparently not.  Particularly since his mother, Rebecca Boldrick, is a teacher for Broward County Public Schools, and a Leftie with a raging hatred for President Trump (see link above).

Most parents would and should be horrified by a child who is so publicly full of himself, so ungracious, so crude.  But he is the person the Left loves at the moment.  It explains why Leftists love Stormy Daniels so much.  They have no standards.  Hogg is the Adam Schiff of faux outrage.  At his core, he is just another shameless self-promoter.

Most parents of a certain age would be paralyzed with humiliation by a child such as David Hogg – especially when he publicly insults them with deranged gutter language.

Our culture needs to be fixed.  David Hogg is the poster boy for everything wrong with the Leftist indoctrination that has characterized parenting and education for the last forty-plus years.