THE PERFECT WAY FOR THE FRENCH TO PROVE THEY ARE CHARLIE

Millions of French men and women are proclaiming Je suis Charlie – I am Charlie – as we all know.  But saying it is not proving it.  That must be done by doing, by concrete action.

Yes, they can agitate and demand their government do what’s necessary – such as:

*Eliminate all Non-Moslem No-Go Zones in France;  apply normal police authority to them as anywhere else.

*Eliminate Islamic Sharia Law as having any binding legal authority in France.  Any Moslem demanding to live under Sharia Law will be provided with a one-way ticket to the Islamic country of his choice where Sharia prevails.

*Terminate all welfare programs and assistance of any kind to all non-French citizens.

*Allow rifle, shotgun, and handgun ownership and concealed and open carry by anyone over 30 years old who is a natural born Frenchman who can pass a criminal background and shooting test.

*Change any criminal and civil laws that impair self defense and defense of others. Adopt the Castle Doctrine which legalizes killing burglars, robbers, muggers, car thieves, arsonists, and other  traditional thugs.

Good luck on their Euroweenie government doing any of this.  So let’s focus on what Frenchfolk can do themselves.  And how perfect it would be for them to prove they are Charlie through that ultimate expression of their culture – food.

The timing couldn’t be better.  There’s an ingredient in French cuisine that no self-respecting French chef would be without, yet strikes horror in the hearts of both Moslems and Moochelle Obama together with her fascist food police.  You can’t get better than that.  We are talking about lard – rendered pig fat.  And guess what?

Lard Is The New Health Food.  Quite seriously.

That’s according to Food & Wine (the link above – it’s a must-read if only because it’s so entertainingly written).  Also according to the British lefties of the London Guardian – Consider Lard – and the US lefties at HuffPo – 10 Reasons You Should Be Cooking with Lard (another must-read for explanatory clarity).

What used to be an insult synonymous with gluttony and cardiac arrest, lard now has gone healthy gourmet.  The most health-conscious now demand non-hydrogenated artisanal lard.  Google "non-hydrogenated lard" and you’ll get 45,000 hits – among them links to various suppliers.

There’s even a cookbook out now celebrating it:  Lard: The Lost Art of Cooking with Your Grandmother’s Secret Ingredient.

Thus it should be an easy sell to persuade restaurants everywhere in France to cook with lard, every bakery to prepare their goods with lard, for every Frenchman and lady to demand their morning croissant baked with lard.  Accept no substitutes!

"By any estimation, lard is a healthier fat than butter," notes the Guardian and gives the facts why.  A croissant made with lard instead of butter is amazingly tastier.  You’ve never actually eaten real French Fries unless cooked in lard, for that was how they originated before lard’s demonization. This enables every McDonalds in France to brag their pommes frites are now fried in healthy lard rather than industrial oil.

The French proving they are Charlie with lard is a real hat trick: 1) They get to claim they are advocating cooking with lard for health reasons, not to be anti-Islamic (wink, wink, chortle).  2) Any restaurant that cooks with lard guarantees Moslem-free dining for its patrons.  3) What they are eating really does taste more delicious and really is healthier for them.

The true action item, however, is not just persuading restaurants and bakeries to cook with healthy lard but to publicize it – state it prominently on their menus and ads:  We prepare our meals/baked goods with pure French lard – it’s the new health food!

In no way imply the motivation is Anti-Moslem, Anti-Halal ("halal" is food adhering to Koranic restrictions).  "We just want to eat healthy" is the only motivation – and try hard to say that with a straight face.

Lard – the new health food is a meme that will drive Moslems in France crazy, and many out of France entirely.    It is the perfect way for all those millions of French waving their Je suis Charlie signs to prove they really are.

This morning (1/14) in France, all five million copies of the latest issue of Charlie Hebdo featuring a crying Mohammed on the cover sold out quickly.   Here’s the cover they could follow that up with: 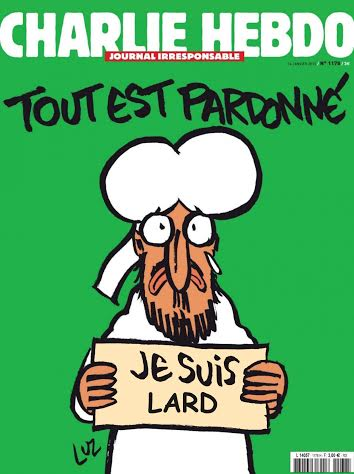 Note:  The word in French is the same — lard.  Feel quite free to send this proposal to anyone you may know in France.