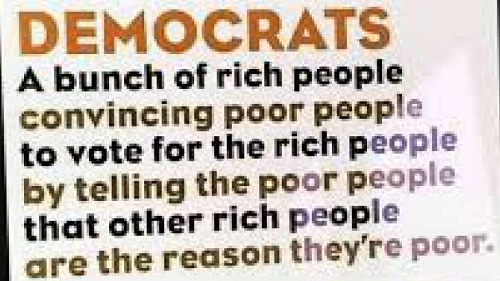 Just before the Tax Cuts and Jobs Act of 2017 passed last week, House Minority Leader Nancy Pelosi told us what she thought of the bill in the proverbial “no uncertain terms” –

“In this holy time, the moral obscenity and unrepentant greed of the GOP tax scam stands out even more clearly…

This GOP tax scam is simply theft, monumental, brazen theft from the American middle class and from every person who aspires to reach it. The GOP tax scam is not a vote for an investment in growth or jobs. It is a vote to install a permanent plutocracy in our nation. They’ll be cheering that later.

It does violence to the vision of our Founders. It disrespects the sacrifice of our men and women in uniform, who are a large part of our middle class and to whom we owe a future worthy of their sacrifice. And it betrays the future and betrays the aspirations of our children. It demands, it morally demands a no vote from every member of this house of the people.”

Did Pelosi actually believe this hortatory bilge or was she just banking on the stupidity of the American public and the unyielding support of the Democrats’ ever-loyal media claque?

Well, the latter is almost always reliable – for when it comes to “permanent plutocracy in our nation” few should know more about that than Nancy.  According to the Center for Responsive Politics, she has a net worth of $196 million.

And that was in May 2017.  Since then there’s been another 10+% run-up in the stock market, so that would conservatively push her well over the $200 million mark thanks, ironically, to the policies of Donald Trump.  (Okay, not entirely, but unquestionably to some extent.)

Over the last decade or so, American politics has had something of a role reversal. The Democrats have increasingly become the Party of the Rich — Silicon Valley, Hollywood, media, a good swath of Wall Street — making Pelosi’s statement and similar remarks made by Schumer particularly absurd.

Moreover, it is well known — but not well known enough yet — that what Pelosi said was a straight-out lie.  Guy Benson explained it well.

“Throughout this debate, we’ve shared data-driven analyses from three separate nonpartisan organizations: The Joint Committee on Taxation (JCT), which is an official Congressional scorekeeper, the Tax Foundation (which leans to the right), and the Tax Policy Center or TPC, (which leans to the left).  In spite of the deceptive rhetoric flying around social media and the airwaves, all three outfits agreed that the GOP proposal would, on average, reduce the tax burdens of every income group in America.”

More than 80% of Americans are getting tax cuts averaging out to $1600 per annum (chump change to Pelosi, but real money to middle class Americans) with only an estimated 5% seeing their taxes go up — all of whom are in the top brackets and many of whom live in New York and California. It’s Silicon Valley, Hollywood, media, and Wall Street again.  No wonder they’re upset.

The Democrats are depending on the public never figuring this out.  That is what is known at Vegas casinos like Caesar’s Palace as a “sucker bet.”

Even though the Republicans are some of the worst communicators in the history of politics (see below), and even though the media will never stop their drumbeat, checks will arrive on payday starting February 2018 and they will have numbers on them, bigger numbers than they had before.

People will see those checks (or account transfers) with their own eyes and their lives will actually change for the better. The polls — fostered by the most nauseating partisan propaganda, plus the fact that half the country doesn’t pay income taxes at all anyway — will also start to change.

Of course, the media will then yell and scream (already are) that these cuts expire in six or seven years, even though these same “journalists” will not deign to explain why that’s so — assuming they’re smart enough to know the Senate rules — or to admit that the cuts can be extended at the time of expiry and in all probability will be.

Meanwhile, lower corporate tax rates will stimulate billions in American company profits repatriating to this country to be used for the “jobs and growth” about which Pelosi was so allegedly skeptical.  (She was probably panicking it would be true.)

What Schumer, Pelosi and their (also rich) media claque are relying on is nothing less than the failure of America.  If the average American gets screwed, then they win. When that same average American starts to figure out the game they’re playing on them, those average Americans (i.e., voters) are likely to be angry, very angry.

The Party of the Rich should beware.

(P.S.: The aforementioned Republican ineptitude at communication, however, better improve.  The recent PAC television ads praising the tax reform are so clumsy and simple-minded you want to bang your forehead on the table.)