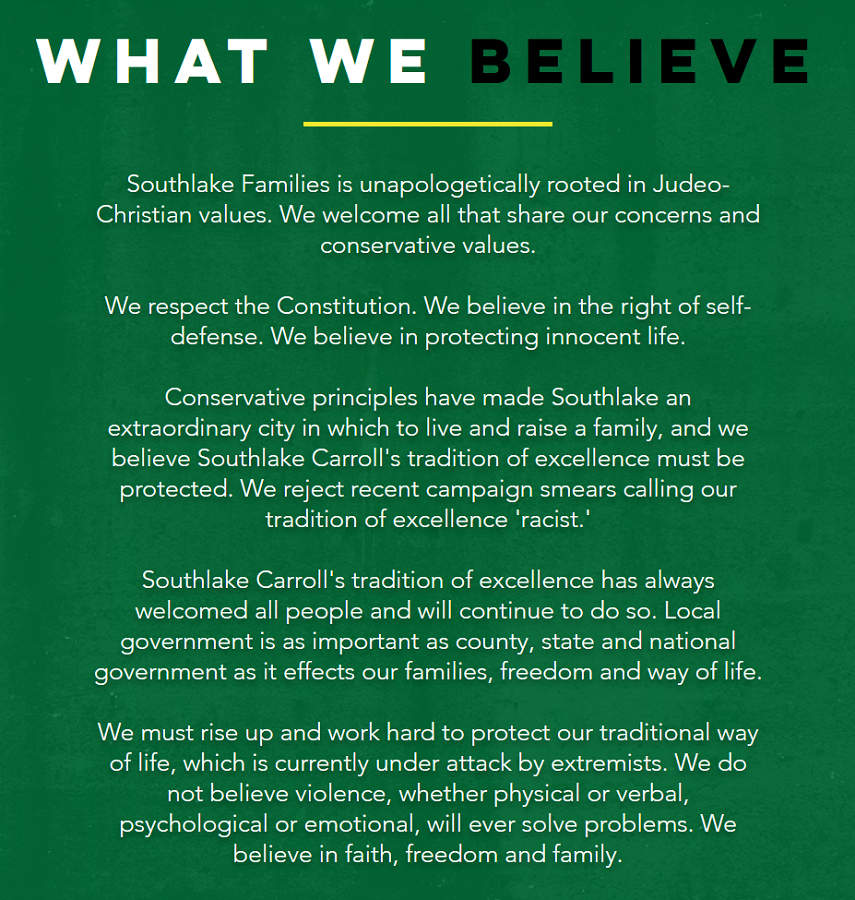 WHAT THE PARENTS WE NEED BELIEVE

Southlake, Texas, a suburb of Dallas, has exploded into national media coverage with arrests of school board members after parents found out what their schools have been teaching in the name of “racial justice.” They’re fighting back with lawsuits and challengers for two school board seats in an election that finishes this Saturday, May 1.

They are the kind of parents America needs everywhere.  Here is their story.

Carroll Independent School District of Southlake is the top-achieving school district in Texas. It has no racial achievement gaps, which is nearly unheard of. That’s because Southlake attracts high-achieving families of all races.

The local median income is more than four times the national average and poverty there is statistically nonexistent. According to district data, “microaggressions,” bullying, and racially charged incidents happen approximately three times per month in the district of 8,500 students, meaning they involve 0.3 percent of students a year.

Yet, beginning in 2018, the district rushed into an eye-popping “cultural competence” plan after two videos of students singing the n-word along with black rappers went viral on social media.

Media outlets went nuts on the story, and so did local school board meetings, where sometimes-crying taxpayers, parents, and students spent hours insisting their lives have been forever damaged by the kind of “institutional racism” in Southlake illustrated by the rap sing-alongs.

They weren’t complaining that black rappers stud songs with racial slurs, or that parents let their kids listen to such music. They were complaining about things like teasing and graffiti. They demanded the school district end such annoyances, and even treat them like crimes, or be convicted in the court of public opinion of enabling “institutional racism.”

Retired Dallas Cowboys player Russell Maryland and Robin Cornish, the widow of another Cowboy, who both have kids in the district, used national media appearances to pressure the town to enact a “Cultural Competence Action Plan,” or CCAP. A long-form article from NBC News in January that quotes Cornish accuses the town of harboring racists.

Cornish also told the Fort Worth Star-Telegram in February 2019 the school district was “sweeping this under the carpet, and they are complicit. Unfortunately, this is the way our country is right now. Southlake is a microcosm of that. We have someone running the country right now who says it’s OK to be racist.”

The parents decided to fight back.

“The idea that America is fundamentally flawed because some people have a [racist] problem in their minds, that’s a recipe to keep you in poverty and unhappiness for the rest of your life,” said Juan Saldivar, a father of a Southlake student, to explain his opposition to restructuring Southlake schools around “systemic racism.” “My parents always told me it doesn’t matter whether people like you, it matters whether the law protects you, and it does.”

He said most parents who oppose the district’s rush into racial extremism over the past three years don’t want to talk to media outlets because their perspective is depicted as racist, even though their true goals are combating racism and ensuring equal treatment and continued academic excellence for all Carroll students.

A local parents group organized to oppose CCAP, Southlake Families PAC, makes that clear throughout their website  SouthlakeFamilies.org.  The site is truly inspirational.

Their ongoing litigation has now paused CCAP and led to two school board members posting bail after being indicted in a lawsuit alleging they conducted meetings about CCAP in secret in violation of state law.

Here’s a look at what Southlake schools have been doing in the name of “cultural competency” and “combatting racism.” It’s evidence of the district seeking to push extremist views on kids—a completely different story than CCAP proponents claim and corporate media have reported in the past three years.

During a 2019 retreat, Carroll administrators were given a preview of the kind of instruction they would be expected to oversee and carry out under a “cultural competency” regime.

In slides presented at that retreat, teachers and administrators who choose to treat students, parents, and colleagues equally regardless of their skin color or ethnicity were accused of “cultural blindness”: “a state in which differences were ignored and one proceeds as if differences don’t exist.”

The slides claimed, “White privilege is being able to navigate daily life in the American culture without having to think about race.”

The administrators were encouraged to construct a “white identity,” discussing “What does it mean for you to be white?” and “whiteness,” as well as “Nam[ing] some characteristics of white culture.”

While being encouraged to think of themselves in terms of race, however, administrators were also told that being white is a bad thing. It includes “white fragility,” “a state in which even a minimal amount of racial stress becomes intolerable, triggering a range of defensive moves (anger, fear, guilt.. silence).”

Ironically, the presentation also warns against “stereotyping,” which it says “happens when you generalize about a person while ignoring the presence of individual differences.”

“This is how bad it has to get before most white people notice: Burning crosses, Swastikas, KKK, the N-word,” Carroll administrators were told in the presentation.

On August 10, 2020, Assistant Principal Rene James gave a presentation to Carroll High School teachers focused on race. It directed them to think about their teaching through “The Lense [sic] of Equity,” which means racializing every possible interaction: where students sit, who raises his hand (and doesn’t), which students take advanced classes, and so forth, in extreme detail.

The presentation included this video from a California nonprofit group about “racism” in schools. An unnamed young black woman in the video claims “Black and brown students” need extra resources because they “have to work extra hard and do like double the work just to succeed.”

James’s presentation also links to an “equity rubric,” or things teachers should change about their professional practices, that include “The teacher is aware of their [sic] biases and privileges,” “The teacher utilizes identity-affirming strategies,” and “The school’s core policies and practices indicate a prioritization of Equity.” Teachers were instructed to document “evidence of progress” on metrics like this.

James’s presentation also links to “A Resource for Equitable Classroom Practices 2010,” a 40-page document that includes detailed instructions for greeting students, calling on them in class, and classroom decorations, all with an eye to race. It implies that behaviors such as mispronouncing a student’s name, making both too much or too little eye contact, or not equally distributing how a teacher walks around the classroom is racist.

The document also demands that teachers who don’t want to be considered racists “Use[] body language, gestures, and expressions to convey a message that all students’ questions and opinions are important,” and include non-English words in classroom materials.

A “culturally competent” professional development session held on Sept. 9, 2020 for Carroll ISD staff included similar material. It claimed that teachers who “maintain long held traditions over [a]changing population’s traditions” and “neglecting to or refusing to each from a culturally relevant perspective,” as well as striving to treat all people equally regardless of skin color, were negative behaviors teachers should shun.

It called on teachers to “understand there is a system and culture of power dependent on the suppression of other cultures in order to maintain itself” and claimed “educators no longer have the luxury of being color-blind or color-mute in a society socially constructed around race.”

The presentation further called on teachers to consider how they can be a “more critically race conscious leader and educator (in America).”

The presentation depicted as educators’ ultimate goal to encourage students to “work to be agents of change,” and along the way learn to “view problems and issues through different ethnic lenses.” It called on teachers to develop environments that push students to “become actively engaged in solving real-world problems centered around diversity, culture, power, equity, and social-justice.”

A Poisonous Recipe for Poverty and Unhappiness

CCAP proponents like Maryland depict this kind of material as teaching children basic human decency. But those who oppose it see materials like these and draw the conclusion that there’s a lot more going on here.

Saldivar is a retired colonel who graduated from West Point and remained in Southlake after he was stationed in the area on a military assignment. He strongly opposes this kind of instruction trickling down into his daughter’s fourth-grade classroom.

“I did everything I could to get my child into [Carroll] and it’s No. 1 in Texas, and I say I do not want my child growing up with this stuff being injected into her brain because it’s poison,” he said in an interview. “It’s the seeds of destruction that ruin one’s ability to grow up happy and be a leader in society.”

A Mexican-American grandson of immigrants, Juan was the first in his extended family to go to college. He said he’s experienced racism from both white people and “people of color,” but said racist actions by individuals don’t indict the entire nation he’s put his life in danger to protect and that has given his immigrant family opportunities far beyond their sharecropper past.

“The outcome is nothing less than the survival of our national identity itself. No nation can survive a generation of citizens who hate their country,” Saldivar said to explain why he finally decided to speak his mind despite the social pressure he knew he’d face for it. “That’s why I say education is a higher endeavor than war. It has a longer-lasting impact.”

Joy Pullmann is executive editor of The Federalist, a happy wife, and the mother of six children. She is the author of the bestseller, “Classic Books for Young Children.”