THE PAPER CIVIL WAR ON TRUMP 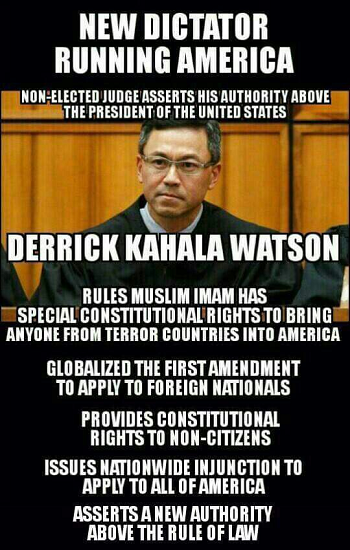 The original Civil War was fought by farmhands and factory workers, freed slaves and young boys turned soldiers; the new Civil War is being fought by lawyers in blue or gray suits not with bullets, but with bullet points.

From the Mueller investigation to Federal judges declaring that President Trump doesn’t have the right to control immigration policy or command the military, from political sabotage at the DOJ by Obama appointees like Sally Yates to Patagonia’s lawsuit over national monuments, the cold civil war set off by the left’s rejection of the 2016 election results has been a paper war largely waged by lawyers.

“The biggest threat to New Yorkers right now is the federal government,” Attorney General Eric Schneiderman of New York recently declared. The radical leftist pol who had once vowed to do everything possible to elect Hillary Clinton was explaining his hundred lawsuits against the government on everything from net neutrality to the travel ban meant to keep out the Islamic terrorists running over tourists near Ground Zero and bombing commuters in the tunnels off Times Square.

Islamic terrorists have killed thousands of people in New York City in the last two decades. Net neutrality’s current death toll hovers around zero. The Federal government is far less of a threat to New Yorkers than their own State government which insists that Islamic terrorists should be able to kill them.

But it is a great threat to a class of political lawyers whose ranks include AG Schneiderman, Hawaii’s Judge Derrick Watson, Mueller’s team, Sally Yates, the ACLU and countless other #resistance combatants.

The blatant secessionism of the AG’s premise is no longer extraordinary. Not when California’s Jerry Brown tours the world signing independent environmental treaties. Schneiderman is one of a number of blue state attorney generals who have decided that their primary focus shouldn’t be enforcing the law, but resisting the Federal government.

But Scheiderman is also articulating the central tenet of the new #resistance which, despite Antifa’s antics, is more dedicated to legal sabotage than actual violence.

The loss of the two elected branches of government has forced the left to default to the unelected third. Like AG Schneiderman, the left’s legal civil war appears to reject the authority of the Federal government.

But despite the posturing, blue staters aren’t serious about seceding. Nor have they become newfound converts to the rights of states to go their own way when they disagree with DC.

New York and California’s #resistance apparatchiks aren’t rejecting the authority of Federal judges. They’re turning to them and relying on them. Instead they’re rejecting the authority of elected Federal officials. Their secession isn’t from the Federal government, it’s from democracy. They want a strong central government. They just aren’t willing to allow the American people to decide who gets to run it.

That’s what the Paper Civil War is about.

Will the American people govern themselves? Or will Mueller, Schneiderman, Watson, Yates and ten thousand other elites with law degrees be allowed to turn elections into a meaningless farce?

Federal judges have seized previously unimaginable amounts of power by not only blocking orders that had always been considered an essential part of presidential authority on flimsy premises that when dissected amount to a critique of President Trump’s character.

Federal judges are now demanding that agencies under the control of the President of the United States enact their orders, such as accepting transgender military recruits.

The absurd outcomes of these rulings, that the University of Hawaii can set national immigration policy, but not the President of the United States, and that fitness to serve in the military can be determined by a Federal judge, but not by the military or the commander in chief, are only an irrational side effect of a conflict between the elected branches of government and an unelected class of political lawyers.

The Mueller investigation has to be seen in the context of a battle between the democratic powers of the people to choose their own representatives and the lawyers who actually run the government.

Government by litigation and investigation shifts power away from voters to lawyers. What was meant to be a last resort for redressing serious violations instead becomes the primary test for holding political office.

When investigation and litigation become more powerful tools than en election, then a politician must court the political legal class ahead of the country’s voters and put his obligations to them first.

That intended outcome is also the cause of the conflict.  Because President Trump refused to put the political class ahead of the voters.

The Paper Civil War is being fought to reaffirm the centrality of the establishment over the voters. It’s a conflict between the political class and the people. It’s a struggle over the tools of government being waged with those tools.

Populism isn’t always a threat to the establishment. Obama’s populism didn’t threaten the establishment because its purpose was to reaffirm its power. Hope and Change just meant building a coalition that would vote for more government power in exchange for political goodies.

But Trump’s populism challenges the existence of the establishment and its ability to distribute those goodies.

Politicians often run against the political machine. But most just want to pull the levers. Trump has challenged its power and its existence. And that is what set off the Paper Civil War.

Legal conflict is the last stage before physical conflict. The lawyers’ war is a last ditch effort by the establishment to wrest physical control of the government from President Trump.

Unable to give the orders as the representatives of the people, the Left is asserting every possible valid and invalid legal stratagem to run the government anyway. And to run President Trump out of town.

If its legal gambit fails, the Left will default fully to mass protests, street violence and terrorism.

But the beauty of the legal gambit is that it allows the Left to make common cause with establishment non-radicals like Mueller or the FBI’s Strzok who disprove of President Trump without sharing the left’s larger political agenda. A civil war fought by lawyers is cleaner and less ugly than one fought with bombs and bullets.

If President Trump can survive the lawyers’ war, his opposition will be split between radicals who support violence and an establishment that wants to keep things running.

That is what can be called The Mueller Test.

If the Democrats can’t sweep into office on Mueller’s coattails, the whole thing dies with a whimper. As Trump reshapes the judiciary, the judicial activism will matter less. The lawyers’ war will either end with the next election. Or it will begin in earnest. And only voter turnout will decide that.

Meanwhile the Paper Civil War continues. It’s a civil war fought with paperwork. But its outcome will determine whether the “government of the people, by the people, for the people” that President Lincoln invoked in the Gettysburg Address will thrive or “perish from the earth.”

Governments are run by bullets and paper, by force and process. Today’s civil war is still a paper war. But if the paper civil war fails, the rest of it may be fought the same way as the original civil war.  If so…