THE PANDEMIC IS ALL BASEMENT BIDEN HAS LEFT 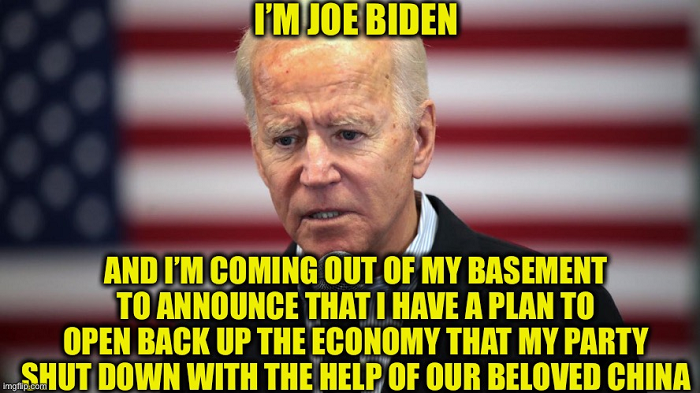 He brought the economy back from the brink, where the Obama/Biden administration had purposefully kept it.  He has successfully stopped the massive illegal immigration that was contributing mightily to the unemployment of American workers.

He has done more for our black Americans than any previous president: opportunity zones, prison reform, funding our historic black colleges. He has rebuilt our military, which Obama/Biden eviscerated.  He created the Space Force.

The man is a pro-American machine of patriotism and confidence in our future.  Everywhere he goes, thousands of equally pro-Americans show up in droves for a dose of his infectious exuberance.  He is to many of us the best medicine for loving our country among those who hate this nation as much as we love it.

As we all know, we live among people who are so mysteriously filled with hatred for this man who has rescued America from the Alinskyite designs of the left, from foreign wars, and from the economic dreariness of the Obama years, that they would rather see our country utterly destroyed rather than see President Trump re-elected.

What accounts for this mania is a mystery to this day.

The Democrat party most likely did not plan for Joe Biden to be their candidate.  In Congress for forty-seven years, the man had never accomplished anything but a bad reputation for corruption, for his racist views – he opposed integration, did not want his kids to go to school in a “racial jungle.”

He was best pals with Robert Byrd, a former Exalted Cyclops of the KKK. He reveled in humiliating Clarence Thomas throughout his SCOTUS confirmation hearings.  He has lied too many times to count, about his own achievements, background, academic record, incidents and experiences as a senator and V.P., etc. He’s been accused of sexual assault and he’s handsy with even young girls.

How on earth did his party put him up as a presidential candidate at this moment in time?  He is the exemplar of everything we do not want or need as a leader, let alone as president.

It was perhaps an accident.  They did not want Bernie Sanders, Pocahontas polled badly as did Kamala Harris.  Pete Buttigieg was a non-starter as was Andrew Yang.  Amy Klobuchar was, well, Klobuchar.  Michael Bloomberg and Tom Steyer are extravagantly rich but pathetic.

Tulsi Gabbard was perhaps the most decent and well informed among them but they could not, would not consider her.  She was a vet, smart and unafraid.

So they ended up with Biden by default.  It was the primary in South Carolina and the faith of Rep. James Clyburn that cinched the deal to much of the party base’s utter dismay.

They knew then what we all know now: Joe Biden is neither smart nor wise.  He lacks character and is profoundly corrupt.  He has never accomplished anything of import in forty-seven years but to enrich himself and his family, nuclear and extended.

The Biden family is a crime syndicate.  It has sold out the U.S. for big money.

Now with just a few weeks until the election, the Biden family’s corruption is coming into full view, despite social media’s rapacious attempts to squelch the news of Hunter’s career as an influence peddler.

Outside of D.C., little people go to prison for a fraction of the crimes committed by the Bidens and the Clintons.  That is how the world works these days.  Powerful crooks like the Clintons, the Bidens, the Feinsteins, Pelosis, et al, operate on a plane reserved for the likes of their ilk.

Already thousands of people, hopefully not millions, have cast their votes, before the news of Biden’s blatant corruption broke.  Would knowing then what they perhaps know now have made a difference?  Maybe, maybe not.

If their hatred of the president, as irrational as it is, has obliterated their sense of right and wrong, patriotism vs. antipathy for their own country, probably not.

It seems that half the population has lost all sense of pride in our nation.  They have succumbed to the vicious indoctrination of the Marxist left.  Like horses led to water, they have been led to anti-Americanism.  Joe Biden is on the side of the anti-Americans.

Trump is on our side, those of us who love this country, who have been part of its continuing evolution into an always-improving nation, who revere our once civilized society that the left seeks to demolish in the name of compassion for criminals.  Their attitude is let them burn down our cities, our businesses, our homes because we deserve their rage!

Everyone, please find a way to watch Shelby Steele’s documentary, What Killed Michael Brown.  It is profound and so sadly true in its conclusions.

The left has tried to assuage its guilt over slavery to the point of incapacitating those it deems victims of their own racism.  It has robbed them of their humanity in the case of those “compassionately” relegated to poverty and projects.

Biden is still doing that!  Pandering to blacks as if they need his handouts to prevail.  He still believes they are inferior to himself.  They are not; they are as capable of success as any American; skin color is not relevant.  MLK knew that;  Biden does not and is as racist as he was fifty years ago.

The Democrats know well that their candidate is not only flawed but cognitively impaired.  At this point they don’t care.  They are prepared to drag him across the finish line by any means necessary.  If elected, he would not be the man in charge anyway.

Nor would Kamala, despite her wholly undeserved quest for power.  Harris is as qualified to be president as Greta Thunberg and as about as mature.

So all they’ve got is the pandemic.

Despite Trump’s unequaled address of the crisis from day one, the Democrats pound him day after day for flubbing it.  He did not.  He was as on top of it from the moment its potential seriousness was ascertained.

Joe Biden, on the other hand, was not.  He is a tool of China and did their bidding for months.  He now campaigns on the virus alone.  It is all he has.  Biden is all in for China which is why he must not become the president of the United States. He long ago sold his soul for money to the highest bidders.