THE ORIGINS OF OUR SECOND CIVIL WAR 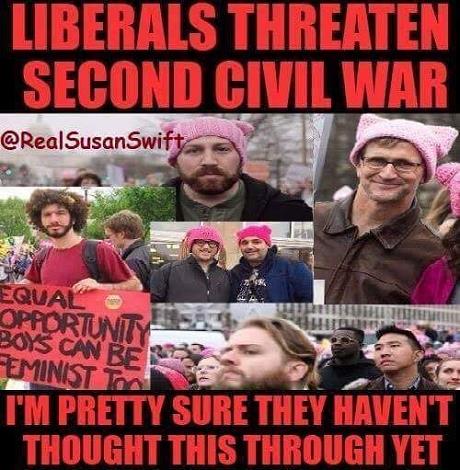 Globalism, the tech boom, illegal immigration, campus radicalism, the new racialism . . . are they leading us toward an 1861?  How, when, and why has the United States now arrived at the brink of a veritable civil war?

Almost every cultural and social institution — universities, the public schools, the NFL, the Oscars, the Tonys, the Grammys, late-night television, public restaurants, coffee shops, movies, TV, stand-up comedy — has been not just politicized but also weaponized.

Donald Trump’s election was not so much a catalyst for the divide as a manifestation and amplification of the existing schism.

We are now nearing a point comparable to 1860, and perhaps past 1968. Left–Right factionalism is increasingly fueled by geography — always history’s force multiplier of civil strife.

Red and blue states ensure that locale magnifies differences that were mostly manageable during the administrations of Ford, Carter, Reagan, the Bushes, and Clinton.

What has caused the United States to split apart so rapidly?

Globalization
Globalization had an unfortunate effect of undermining national unity. It created new iconic billionaires in high tech and finance, and their subsidiaries of coastal elites, while hollowing out the muscular jobs largely in the American interior.

Ideologies and apologies accumulated to justify the new divide. In a reversal of cause and effect, losers, crazies, clingers, and deplorables themselves were blamed for driving industries out of their neighborhoods (as if the characters out of Duck Dynasty or Ax Men turned off potential employers).

For the elites, the muscular classes were too racist, xenophobic, or dense to get with the globalist agenda, and deserved the ostracism and isolation they suffered from the new “world is flat” community. London and New York shared far more cultural affinities than did New York and Salt Lake City.

Meanwhile, the naturally progressive, more enlightened, and certainly cooler and hipper transcended their parents’ parochialism and therefore plugged in properly to the global project. They felt that they were rightly compensated for both their talent and their ideological commitment to building a better post-American, globalized world.

One cultural artifact was that as our techies and financiers became rich, as did those who engaged in electric paper across time and space (lawyers, academics, insurers, investors, bankers, bureaucratic managers), the value of muscularity and the trades was deprecated.

That was a strange development. After all, prestige cars, kitchen upgrades, gentrified home remodels, and niche food were never more in demand by the new elite. But who exactly laid the tile, put the engine inside the cars, grew the arugula, or put slate on the new hip roof?

In this same era, a series of global financial shocks, from the dot-com bust to the more radical 2008 near–financial meltdown, reflected a radical ongoing restructuring in American middle-class life, characterized by stagnant net income, family disintegration, and eroding consumer confidence.

No longer were youth so ready to marry in their early twenties, buy a home, and raise a family of four or five. Compensatory ideology made the necessary adjustments to explain the economic doldrums and began to characterize what was impossible first as undesirable and later as near toxic.

Pajama Boy sipping hot chocolate in his jammies, and the government-subsidized Life of Julia profile, became our new American Gothic.

Suddenly the lower middle classes and the poor had in their palms the telecommunications power of the Pentagon of the 1970s, the computing force of IBM in the 1980s, and the entertainment diversity of the rich of the 1990s.

They could purchase big screens for a fraction of what their grandparents paid for black-and-white televisions and with a computer be entertained just as well cocooning in their basement as by going out to a concert, movie, or football game.

But such electronic narcotics did not hide the fact that in terms of economics the lifestyles of their ancestors were eroding.

The new normal was two parents at work, none at home; renting as often as buying; an eight-year rather than three-year car loan; fewer grandparents around the corner for babysitting or to assist when ill; and consumer service defined as hearing taped messages of an hour before reaching a helper in India or Vietnam.

High-tech gadgetry and the power to search the Internet did not seem to make Americans own more homes, pay off loans more quickly, or know their neighbors better. If in 1970 a nerd slandered one on the sidewalk and talked trash, he might not do it twice; in 2018, he did it electronically, boldly, and with impunity behind an array of masked social-media identities.

The Campus
Higher education surely helped split the country in two. In the 1980s, the universities embraced two antithetical agendas, both costly and reliant on borrowed money.

On the one hand, campuses competed for scarcer students by styling themselves as Club Med–type resorts with costly upscale dorms, tony student-union centers, lavish gyms, and an array of in loco parentis social services.

The net effect was to make colleges responsible not so much for education, but more for shielding now-fragile youth from the supposed reactionary forces that would buffet them after graduation.

But if campus materialism was at odds with classroom socialism, few seemed to notice. Instead, the idea grew up that one had no need to follow concretely the consequences of his abstract ideology.

Or even worse, one’s hard-left politics — the louder and more strident the better — became a psychological means of squaring the circle of denouncing the West while being affluent and enjoying the material comforts of the good life.

Universities grew not just increasingly left-wing but far more intolerant than they were during the radicalism of the Sixties — but again in an infantile way. Speakers were shouted down to prove social-justice fides. “Studies” courses squeezed out philosophy and Latin.

History became a melodramatic game of finding sinners and saints, rather than shared tragedy. Standards fell to accommodate poorly prepared incoming students, on the logic that old norms were arbitrary and discriminatory constructs anyway.

The curriculum now was recalibrated as therapeutic; it no longer aimed to challenge students by demanding wide reading, composition skills, and mastery of the inductive method.

The net result was the worst of all possible worlds: An entire generation of students left college with record debt, mostly ignorant of the skills necessary to read, write, and argue effectively, lacking a general body of shared knowledge — and angry. They were often arrogant in their determination to actualize the ideologies of their professors in the real world.

A generation ignorant, arrogant, and poor is a prescription for social volatility.

Frustration and failure were inevitable, more so when marriage and home-owning in a stagnant economy were now encumbered by $1 trillion in student loans. New conventional wisdom recalibrated the nuclear family and suburban life as the font of collective unhappiness.

The result was the rise of the stereotypical single 28-year-old — furious at an unfair world that did not appreciate his unique sociology or environmental-studies major, stuck in his parents’ basement or garage, working enough at low-paying jobs to pay for entertainments, while his room, board, and car were subsidized by his aging and retired parents.

Illegal Immigration
Immigration was recalibrated hand-in-glove by progressives who wanted a new demographic to vote for leftist politicians and by Chamber of Commerce conservatives who wished an unlimited pool of cheap unskilled labor.

The result was waves of illegal, non-diverse immigrants who arrived at precisely the moment when the old melting pot was under cultural assault.

The old black–white dichotomy in the United States was being recalibrated as “diversity,” or in racialist terms as a coalition now loosely and often grossly inexactly framed as non-white versus the (supposedly shrinking) white majority.

Compensatory politics redefined illegal immigration once it was clear that not just a few million but perhaps one day 20 million potential new voters would remake the Electoral College.

Difference was now no longer a transitory prelude to assimilation but a desirable permanent and separatist tribalism, even as it became harder to define exactly what ethnic and racial difference really was in an increasingly intermarried society. We soon went from the buffoonery of a wannabe Native American Ward Churchill to the psychodrama of an Islamist, anti-Semitic Linda Sarsour.

The Obama Project
We forget especially the role of Barack Obama.

He ran as a Biden Democrat renouncing gay marriage, saying, “I believe marriage is between a man and a woman. I am not in favor of gay marriage.” Then he “evolved” on the question and created a climate in which to agree with this position could get one fired.

He promised to close the border and reduce illegal immigration: “We will try to do more to speed the deportation of illegal aliens who are arrested for crimes, to better identify illegal aliens in the workplace. We are a nation of immigrants. But we are also a nation of laws.”

Then he institutionalized the idea that to agree with that now-abandoned agenda was a career-ender.

Obama vowed to “work across the aisle” and was elected on the impression that he was a “bridge builder” who would heal racial animosity, restore U.S. prestige abroad, and reignite the economy after the September 2008 meltdown.

Instead, he weaponized the IRS, the FBI, the NSC, the CIA, and the State Department and redefined the deep state as if it were the Congress, but with the ability to make and enforce laws all at once. “Hope and Change” became “You didn’t build that!”

President Obama, especially in his second term, soon renounced much of what he had run on. He raised taxes, stagnated what would have been a natural recovery, weighed in on hot-button racialized criminal cases, advanced a radical social agenda, and polarized the country along lines of difference.

Again, Obama most unfortunately redefined race as a white-versus-nonwhite binary, in an attempt to build a new coalition of progressives, on the unspoken assumption that the clingers were destined to slow irrelevance and with them their retrograde and obstructionist ideas.

In other words, the Left could win most presidential elections of the future, as Obama did, by writing off the interior and hyping identity politics on the two coasts.

The Obama administration hinged on leveraging these sociocultural, political, and economic schisms even further. The split pitted constitutionalism and American exceptionalism and tradition on the one side versus globalist ecumenicalism and citizenry of the world on the other.

What Might Bring the United States Together Again?
A steady 3 to 4 percent growth in annual GDP would trim a lot of cultural rhetoric. Four percent unemployment will make more Americans valuable and give them advantages with employers.

Measured, meritocratic, diverse, and legal immigration would help to restore the melting pot.

Reforming the university would help too, mostly by abolishing tenure, requiring an exit competence exam for the BA degree (a sort of reverse, back-end SAT or ACT exam), and ending government-subsidized student loans that promote campus fiscal irresponsibility and a curriculum that ensures future unemployment for too many students.

Religious and spiritual reawakening is crucial. The masters of the universe of Silicon Valley did not, as promised, bring us new-age tranquility, but rather only greater speed and intensity to do what we always do. Trolling, doxing, and phishing were just new versions of what Jesus warned about in the Sermon on the Mount.

Spiritual transcendence is the timeless water of life; technology is simply the delivery pump. We confused the two. That water can be delivered ever more rapidly does not mean it ever changes its essence. High tech has become the great delusion.

Finally, we need to develop a new racial sense that we are so intermarried and assimilated that cardboard racial cutouts are irrelevant.

Our current racialism must be seen as a reactionary and dangerous return to 19th-century norm of judging our appearance on the outside as more valuable than who we are on the inside.

Whether we all take a deep breath, and understand our present dangerous trajectory, will determine whether 2019 becomes 1861. 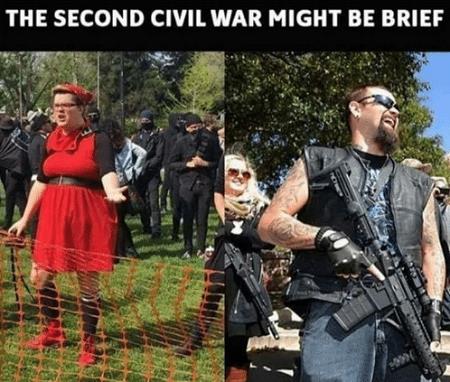