THE OBAMA-CLINTON-MEDIA SYMBIOSIS OF LIES 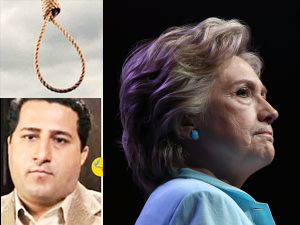 On Sunday (8/07),  the Iranian regime unexpectedly announced it had executed its former nuclear scientist Shahram Amiri.

As reports of Amiri’s demise make clear, former secretary of state Hillary Clinton may very well be partially to blame for his death.

Amiri spent several months in the US between 2009 and 2010, when he returned to Iran. Then secretary of state Hillary Clinton claimed at the time that Amiri came to the US willingly. US government sources told the media that Amiri, who worked on Iran’s nuclear program, was a longstanding US intelligence agent.

Amiri, they said, received $5 million for his information. He left the funds in the US when he returned to Iran.

For his part, Amiri claimed he was kidnapped by US officials during a religious pilgrimage to Medina and brought to the US against his will. Amiri alleged that he was tortured during his time in the US, but that he refused to betray his country.

During his time in the US, the mullah regime reportedly threatened to harm Amiri’s young son, who remained behind in Iran with Amiri’s wife.

In July 2010, Amiri went to the Iranian interest section of the Pakistani embassy in Washington and asked to be repatriated.

Amiri received a hero’s welcome upon arriving in Iran. He was later sentenced to ten years in prison for travelling to the US.  He had served five years of his sentence when he was charged in a secret trial for espionage, found guilty and hanged.

It is impossible to know what caused the Iranians to suddenly execute Amiri.  But if the Iranians had harbored doubts regarding whether Amiri or Clinton was telling the truth about his arrival in the US, those doubts were dispelled last summer with the publication of Clinton’s emails.

Two of those emails outed Amiri as a US agent. In one, sent to Clinton nine days before Amiri turned himself over to Iranian authorities, Richard Morningstar, a former State Department special envoy informed Clinton, “We have a diplomatic, ‘psychological’ issue, not a legal one. Our friend has to be given a way out. Our person won’t be able to do anything anyway. If he has to leave so be it.”

The second email was sent to Clinton by Jake Sullivan, her deputy chief of staff. Sullivan warned her that Amiri’s decision to turn himself in would embarrass the US. He wrote, “The gentleman…has apparently gone to his country’s interests section because he is unhappy with how much time it has taken to facilitate his departure. This could lead to problematic news stories in the next 24 hours.”

Had Clinton been using a government server, both those communications would have been classified and secured.

The best excuse that Clinton was able to come up with to defend her reckless behavior was that she did it for the sake of convenience. In a 2010 email to her senior staff, Clinton explained that the true purpose of the server was to prevent her correspondence from becoming public.

Although deeply significant, Amiri’s execution was “the other Iran story” this week. The main story was Wall Street Journal’s revelation that on January 17, the day the US’s nuclear deal with Iran came into force, the US sent an unmarked cargo plane to Tehran loaded with $400 million cash.

Five US citizens held hostage by Iran were released that day.

In a press conference last Thursday (8/04), Obama dismissed the clear implication that the cash payment was ransom. But his statements were exposed as a lie by former hostage Pastor Saeed Abedini.

Abedini told the media that the hostages waited for hours at the airport before being permitted to board their flight to freedom while the Iranians were waiting for another plane to land.

US law prohibits the payment of ransom for hostages because it is widely acknowledged that paying ransom merely encourages America’s foes to take still more Americans hostage. Since the Iranians received their payment, they have taken three more American citizens hostage as well as several other Westerners.

Obama’s lies and the plight of the hostages is an additional reminder that critics of his Iran policy were correct to criticize him. A year after Obama agreed to the nuclear deal with the Iranian regime, and six months after it formally entered into force despite the fact that the Iranians never formally accepted its provisions, Iran is more dangerous than it was before.

The hundreds of billions of dollars Iran has received from sanctions relief have enabled it to vastly expand its support for terrorist organizations and fund and direct insurgencies against US allies.

Iran sponsored the overthrow of the Yemini regime. It is the engine behind the war in Syria. It controls the Lebanese government and the Iraqi regime. Its terrorists are on the ground in Europe. The terrorist who committed the massacre last month in Munich was trained in Iran.

As for the deal’s purported limitations on Iran’s nuclear capabilities, over the past year we learned that Obama lied when he promised the nuclear deal would stem Iran’s nuclear advance. The unprecedented inspections regime he promised was a lie. The one year nuclear breakout time was a lie. Even the limitations on centrifuge development were a lie.

In defending his miserable agreement with the mullahs last Thursday, Obama continued to lie. He went so far as to say that Israel now supports the deal. This of course, is also a lie, as both the Defense Ministry and Prime Minister Binyamin Netanyahu were quick to note.

Obama and Clinton choose lying as a strategy because it works for them. The influential media outlets barely cover their lies. Indeed, they often go out of their way to cover up their misdeeds.

The New York Times for instance, sufficed with a wire story to report that Israel rejected Obama’s claim that it now supports his nuclear deal with Iran.

The Washington Post insisted that Clinton’s email couldn’t possibly have influenced Amiri’s fate because six years ago Clinton had already announced that he was a US agent.

As for Clinton’s email server, the New York Times failed to report that Clinton lied last Sunday when she told Fox News the FBI concluded that she had spoken truthfully about its use. She then repeated the lie twice and the New York Times continued to ignore her dissimulation.

The media cover for Clinton and Obama because they care more about advancing the Left’s policy goals than about reporting the dire, dangerous consequences of those policies. That is, they are propagandists rather than journalists.

Over the years, many commentators and observers have argued that Clinton is less dangerous than Obama. Obama they say is an ideologue whereas Clinton is driven by a simple lust for power and, of course, her own convenience. Consequently, she causes damage in little ways – like endangering the lives of US agents – while Obama clears a path for Iran to rise as a regional hegemon and nuclear state.

The problem with this assessment is that it ignores their symbiotic relationship. Clinton has decided that her interests lie with acting like a loyal Democrat and implementing Obama’s policies. Like Obama, she doesn’t need to worry about the consequences of those policies for the US and the world. Because like Obama, she is sheltered from criticism by a loyal media.

Amiri is dead. Iran is building nuclear plants with Russia. But as the New York Times explains, “Nobody knows better than President Obama how easy it would be for Donald J. Trump to reverse the policies of the past eight years if he defeats Hillary Clinton this fall.”

Nobody, that is, other than the New York Times, and the Washington Post and CNN, and Clinton. And so they will continue to work together with Obama, to ensure that the public is kept in the dark about the nature of those policies and their horrible consequences for the US and the rest of the world.