THE NECESSITY OF TRUMP 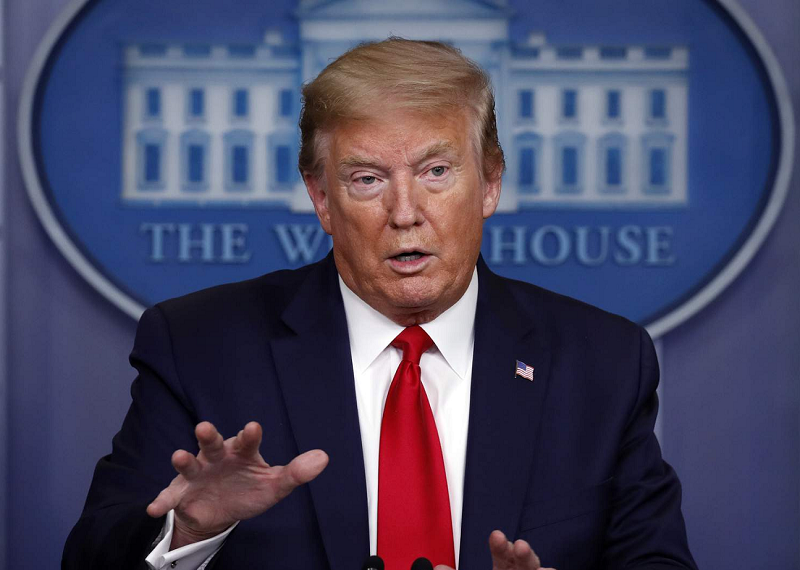 The MSM are out to get him. So are academia, the military-industrial complex, big business and the federal bureaucracy, much of the GOP Elite.

With all these powerful enemies arrayed against him, President Trump doesn’t need fair weather “friends” who threaten to jump off the Trump train over the slightest disagreements.

Many Trump supporters on social media think they’re smarter than the president, get peevish when he doesn’t follow their unsolicited advice. They tend to jerk their knees in reaction to events, pop off before all facts are known, don’t consider how those facts look to people who aren’t hardcore conservatives.

When are these folks going to wake up and realize the Necessity of Trump?  He’s all there is between us and a horrific nightmare come true.

The big news last weekend was President Trump’s commutation of the prison sentence of Roger Stone.

Stone committed perjury when he told a Congressional committee he had a back channel to Wikileaks. There is no doubt of his guilt.

Stone told this lie for the sole purpose of making himself appear to be more important than he actually is, something he’s done often over lo these many years.

Stone’s lie made it appear Trump had something to do with Wikileaks’ publication of DNC emails about Hillary Clinton, when in fact he did not.

The lie was trivial, but perjury isn’t. Stone deserved to do time. But because of the egregious misconduct of the prosecutors and the trial judge, the president did the right thing.

“This is the most corrupt and cronyistic act in perhaps all of recent history,” said CNN legal analyst Jeffrey Toobin.

That’s ridiculous, noted Jonathan Turley, a professor of constitutional law, and a Democrat.

“There is plenty to object to in this commutation without pretending that this is a pristine power besmirched by a rogue president,” Turley said. The commutation of Stone “is not even a distant contender for ‘the most corrupt and cronyistic act’ of presidential clemency.”

Barack Obama issued 1,927 pardons and commutations. Among those receiving them was unrepentant terrorist Oscar Lopez Rivera. 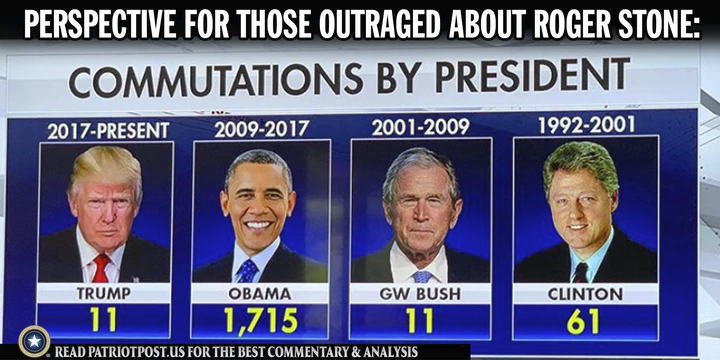 Stone’s Get Out of Jail Free card looks bad to normal people who don’t know the history of pardon abuse. When indictments of coup plotters are handed down, Democrats will say they are politically motivated. Now more will believe them.

Many conservatives celebrated Stone’s commutation as if it were a victory, which shows abominable political judgment. To win in November, the president must appeal to more than the conservative base.

Jack Wheeler’s opinion, however, is that most normal people have hardly any idea who Roger Stone is and have far more important concerns in their lives than his fate – and when they see Dems going Full Freakazoid over his “commutation,” they shake their head and shrug.

President Trump held a meeting with Hispanic business leaders at the White House last Thursday (7/5) to discuss the executive order he plans to issue on the Hispanic Prosperity Initiative.

After it, Robert Unanue, CEO of Goya Foods, the largest Hispanic-owned food company in the country, said: “We’re all truly blessed at the same time to have a leader like President Trump, who is a builder.”

That prompted calls for a boycott of Goya Foods by the usual suspects. But Unanue isn’t backing down, refuses to apologize.  No wonder he was the HFR Hero of the Week last Friday (7/10).

Goya products are very popular with working class Hispanics, but I doubt Chrissy Teigen and other Hollywood celebs and upper middle class metrosexuals eat a lot of rice and beans, so their boycott shouldn’t have much of an effect on Goya’s bottom line.

Their call for a boycott gives us the opportunity to teach these arrogant swine a lesson.

After the boycott was announced, I went to the grocery store to stock up on Goya beans and yellow rice, hot sauce, and adobo seasoning. I’m not alone.  Goya products are “flying off the shelves” with a nationwide conservative “buy-cott.”

Our sending Goya’s sales soaring gives a big middle finger to left, stiffen the spines of other business leaders threatened by the cancel culture.

“Asking Hispanics to cancel Goya just clinched the Hispanic vote for Trump,” says Randy de Goya. “You have a better shot at taking pasta from Italians or soy from Antifa.”

Randy de Goya exaggerates, but not by much.  And taking “soy from Antifa” is a very funny line.

President Trump got just 28 percent of the Hispanic vote in 2016, but his job approval among Hispanics has soared since.

In a YouGuv survey taken May 30/June 1 (just after the riots in Minneapolis and Washington D.C.), 43 percent of Hispanics approved of the job President Trump is doing, with 28 percent strongly approving.

“Hispanic and black Americans, many of whom find their communities destroyed, are not buying the mainstream narrative that Trump is to blame for the lawlessness,” said analysts at the Market Research Foundation.

Polls by Marist in January and McLaughlin & Associates in March put Hispanic approval of the president at 50 percent. In a Marist poll June 22-24, 39 percent of Hispanics said they would vote for Trump (page 5 in link, Hispanics listed as Latino).

If the president could get 39 percent of the Hispanic vote – an increase of nearly 40 percent – that would lock up Florida, Texas and Arizona, swing Colorado and Nevada into his column, make New Mexico competitive.

Republicans would be likely to win Senate races in Colorado and Arizona, have a shot at the open seat in New Mexico.

But all that on-again/off-again Trump supporter Mike Cernovich can see is the president said he will include a “path to citizenship” for DACA recipients in the executive order.

They’re off the Trump train for good if “Amnesty Don” does this, say Cernovich and some others.

What arrogance, idiocy, and suicidal short-sightedness!

Otherwise law abiding DACA recipients aren’t going to be deported. They can be offered a path to citizenship without changing their current legal status (no amnesty beforehand).

A DACA deal would deprive Democrats of their only wedge issue with Hispanics, could drive Hispanic votes for Trump up to nearly 50 percent.

It ought to be clear to all and sundry the president is dead serious about curbing illegal immigration. He won’t make a deal that would undermine that goal. But Cernovich et al dump on him without waiting to see what he has in mind.

They won’t vote for Trump if he makes any kind of a DACA deal, say Cernovich & Co., even though the alternative is to open the floodgates.

It’s probable the president will do some things we don’t like. He’s mortal. But he is all that stands in the way of a Communist takeover. We should keep that in mind.  He is America’s – and the world’s – most necessary man right now.