THE MOST TOTALLY CORRUPT CRIMINAL SCAM IN WORLD HISTORY 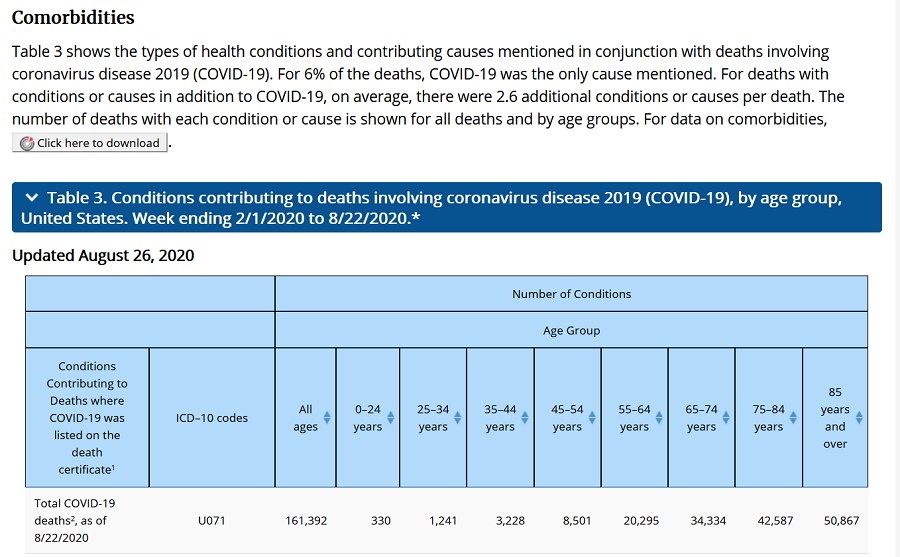 I call it the COVID Con.  Last Wednesday (8/26), CDC issued its latest Coronavirus Disease Update.  What you see above is Table 3 on Comorbidities.  Don’t lose your mind or temper when you read: ”For 6% of the deaths, COVID-19 was the only cause mentioned.”

Most of those dying with the Chinese Flu didn’t have just one serious underlying medical condition, like diabetes or obesity – they had two or more, diabetes and a respiratory disease, obesity and kidney failure, hypertension and heart disease or some other life-threatening combo.  These were very sick people to begin with.

And we’re learning this now?

No wonder in early May, task force member Dr. Birx claimed, “There is nothing from the CDC that I can trust.” She believed the CDC was inflating Chinese Flu mortality by as much as 25 percent.

Death with COVID means that George Floyd is counted a COVID death because he tested positive at autopsy. This is similar to the case of a Colorado man dying of alcohol poisoning but the death was later blamed on COVID. Washington public officials counted gunshot fatalities as COVID deaths.

What all this means is that those at lower risk, younger and healthier, are extremely unlikely to die from the Chinese flu, and most anyone of any age without underlying condition is quite unlikely.  There is simply no good reason whatever for shutting down the economy to protect the healthy, unless economic destruction is the ultimate goal.

Not surprisingly, this revision received little attention in the Fake News Media. Not only ignored, but the truth was suppressed with Twitter blaming the updated CDC numbers on QAnon and removing tweets discussing the new data.

It seems the Left wants QAnon to be the new “vast right-wing conspiracy” that Hillary Clinton once blamed for reports that her husband was having sex with a young White House intern. Yet the CDC numbers are on their website and the blue dress spoke for itself.

The Death Counts for all ages as of last week also speak for themselves – they’ve collapsed to near zero: 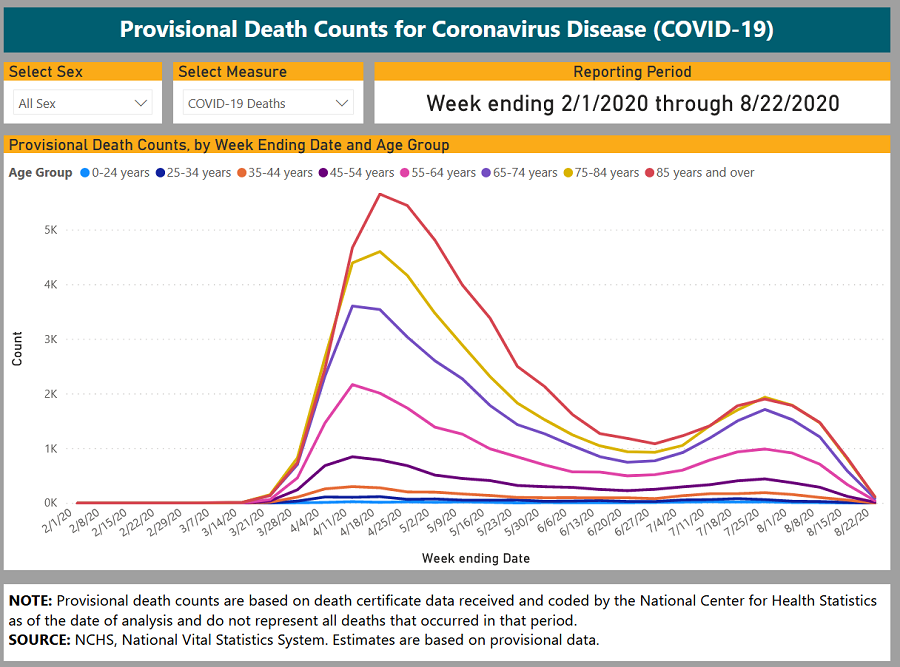 Flat death counts and hospitalizations suggest herd immunity is present in many parts of the country. To justify keeping businesses, churches, and schools closed, the Democrat Media now focused on positive tests.

A positive test means simply that there are viral particles in a person’s respiratory tract. They have been infected months ago and the sensitive PCR test detected dead viral fragments. A positive test does not mean a person is sick or contagious. And more testing means more positive cases, leading to so-called “surges” that were anything but.

Days ago, in of all places, the New York Times, this pillar of the COVID Con crumbled, as they reported,

“The standard tests are diagnosing huge numbers of people who may be carrying relatively insignificant amounts of the virus.

Most of these people are not likely to be contagious and identifying them may contribute to bottlenecks that prevent those who are contagious from being found in time.”

Sensitivity of the PCR tests has to do with amplification of genetic material from the virus. The fewer cycles required, the higher the viral load and greater likelihood of being contagious. By setting the threshold of amplification cycles too high, the test is overly sensitive.

Imagine a home security alarm so sensitive that it is triggered by a wind gust or leaf hitting a window. The homeowner will certainly be alerted if an intruder is attempting to break in, but the alarm will be going off constantly with false, or in the case of the virus, non-clinically significant positives. Or as the NY Times put it,

“Tests with thresholds so high may detect not just live virus but also genetic fragments, leftovers from infection that pose no particular risk — akin to finding a hair in a room long after a person has left.”

33 amplification cycles may be the upper limit for detecting live virus, according to the CDC, but many commercial labs are using 40 cycles as a positive test, in essence sounding the burglar alarm when a bird lands on the back deck.

NY Times found, “Up to 90 percent of people testing positive carried barely any virus.” Yet lockdowns of businesses and schools continue based on these wildly inaccurate numbers.

Is this purposeful or incompetent? I suggest the former.

President Trump downplayed testing in favor of therapeutics such as hydroxychloroquine. The Democrat-media establishment immediately pushed for more testing and told everyone that hydroxy was as deadly as cyanide.

Fox News crank Neil Cavuto said of hydroxy, “It will kill you.” Speaker Nancy Pelosi, claiming an “evidence-based” approach to combating the Chinese flu, pushed for “testing, testing, testing.” Yet both of those admonitions were fear-based, not evidence-based.

Here we are now with deaths and positive cases overstated by 90 plus percent, all to create fear and uncertainty ahead of a presidential election.

This is information warfare, weaponizing medical data to influence an election, regardless of the cost in lives and economic damage. But the Big Con is being exposed, darkness to light. What happens when voters realize they’ve been victimized by the most totally corrupt criminal scam in world history?

Brian C. Joondeph, MD, is a physician and Clinical Professor of Ophthalmology in Denver.