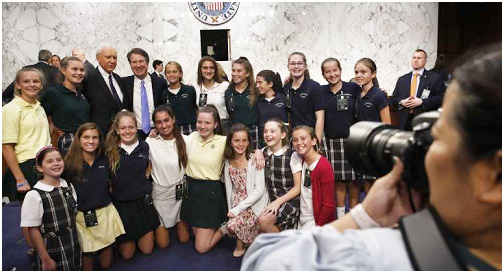 [This editorial was published in today’s Sept. 18 edition of the Wall Street Journal –JW]

The woman accusing Brett Kavanaugh of a drunken assault when both were teenagers has now come forward publicly, and on Monday (9/17) it caused Republicans to delay a confirmation vote and schedule another public hearing.

Yet there is no way to confirm her story after 36 years, and to let it stop Mr. Kavanaugh’s confirmation would ratify what has all the earmarks of a calculated political ambush.

This is not to say Christine Blasey Ford isn’t sincere in what she remembers. In an interview published in the Washington Post on Sunday (9/16), Ms. Ford offered a few more details of the story she told anonymously starting in July.

She says she was 15 when Mr. Kavanaugh, who would have been 17, and a male friend pushed her into a bedroom at a drinking party, held her down, and pawed her until the male friend jumped on them both and she escaped to a bathroom until the two boys left the room.

Mr. Kavanaugh denies all this “categorically and unequivocally,” and there is simply no way to prove it. The only witness to the event is Mr. Kavanaugh’s high school male friend, Mark Judge, who also says he recalls no such event.

Ms. Ford concedes she told no one about it—not even a high school girl friend or family member—until 2012 when she told the story as part of couples therapy with her husband.

The vagaries of memory are well known, all the more so when they emerge in the cauldron of a therapy session to rescue a marriage. Experts know that human beings can come to believe firmly over the years that something happened when it never did or is based on partial truth. Mistaken identity is also possible.

The Post reports that the therapist’s notes from 2012 say there were four male assailants, but Ms. Ford says that was a mistake. Ms. Ford also can’t recall in whose home the alleged assault took place, how she got there, or how she got home that evening.

This is simply too distant and uncorroborated a story to warrant a new hearing or to delay a vote. We’ve heard from all three principals, and there are no other witnesses to call. Democrats will use Monday’s hearing as a political spectacle to coax Mr. Kavanaugh into looking defensive or angry, and to portray Republicans as anti-women. Odds are it will be a circus.

The timing and details of how Ms. Ford came forward, and how her name was coaxed into public view, should also raise red flags about the partisan motives at play.

The Post says Ms. Ford contacted the paper via a tip line in July but wanted to remain anonymous. She then brought her story to a Democrat official while still hoping to stay anonymous.

Yet she also then retained a lawyer, Debra Katz, who has a history of Democratic activism and spoke in public defense of Bill Clinton against the accusations by Paula Jones. Ms. Katz urged Ms. Ford to take a polygraph test. The Post says she passed the polygraph, though a polygraph merely shows that she believes the story she is telling.

The more relevant question is why go to such lengths if Ms. Ford really wanted her name to stay a secret? Even this weekend she could have chosen to remain anonymous. These are the actions of someone who was prepared to go public from the beginning if she had to.

[Note by JW: Ms. Ford also scrubbed all her social media and online profiles before going public in order to hide her long history of blatant Far-Left and Anti-Trump activism.]

The role of Senator Dianne Feinstein is also highly irregular and transparently political.

The ranking Democrat on the Judiciary Committee knew about Ms. Ford’s accusations in late July or early August yet kept quiet. If she took it seriously, she had multiple opportunities to ask Judge Kavanaugh or have committee staff interview the principals. But in that event the details would have been vetted and Senators would have had time to assess their credibility.

Instead Ms. Feinstein waited until the day before a committee markup on the nomination to release a statement that she had “information” about the accusation and had sent it to the FBI.

Her statement was a political stunt.

She was seeking to insulate herself from liberal charges that she sat on the letter. Or—and this seems increasingly likely given the course of events—Senator Feinstein was holding the story to spring at the last minute in the hope that events would play out as they have.

Surely she knew that once word of the accusation was public, the press would pursue the story and Ms. Ford would be identified by name one way or another.

Democrats waited until Ms. Ford went public to make public statements. But clearly some were feeding the names of Ms. Ford and her lawyer to the press, and now they are piling on what they hope will be an election-eve #MeToo conflagration.

“Senator [and Judiciary Chairman] Grassley must postpone the vote until, at a very minimum, these serious and credible allegations are thoroughly investigated,” declared Minority Leader Chuck Schumer on Sunday (9/16). “For too long, when women have made serious allegations of abuse, they have been ignored. That cannot happen in this case.”

His obvious political goal is to delay the confirmation vote past the election, fan the #MeToo political furies until then, and hope that at least two GOP Senators wilt under political pressure.

If Republican Senators Jeff Flake and Bob Corker think a hearing will satisfy Mr. Schumer, they are right to retire from politics.

GOP Senators should understand that the political cost of defeating Mr. Kavanaugh will likely include the loss of the Senate. Democrats are already motivated to vote against Donald Trump, and if Republicans panic now their own voters will rightly be furious. They would be letting Democrats get away with the same dirty trick they tried and failed to pull off against Clarence Thomas.

It would also be a serious injustice to a man who has by all accounts other than Ms. Ford’s led a life of respect for women and the law.

Every #MeToo miscreant is a repeat offender. The accusation against Mr. Kavanaugh is behavior manifested nowhere else in his life.

No one, including Donald Trump, needs to attack Ms. Ford. She believes what she believes. This is not he said-she said. This is a case of an alleged teenage encounter, partially recalled 30 years later without corroboration, and brought forward to ruin Mr. Kavanaugh’s reputation for partisan purposes.

Letting an accusation that is this old, this unsubstantiated and this procedurally irregular defeat Mr. Kavanaugh would also mean weaponizing every sexual assault allegation no matter the evidence.

It will tarnish the #MeToo cause with the smear of partisanship, and it will unleash even greater polarizing furies.

The bottom line: A story this old and unprovable can’t be allowed to delay a Supreme Court confirmation vote.