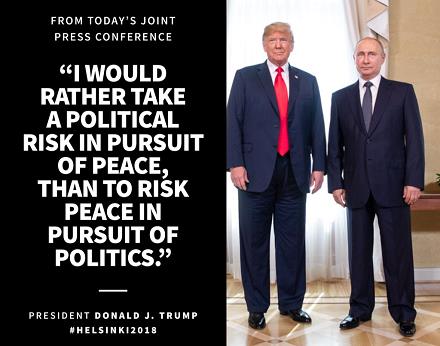 President Donald Trump scored a diplomatic win on Monday (7/16) at his summit with Russian President Vladimir Putin in Helsinki, Finland.

The media, the Democrats, and the Never Trump contingent declared immediately that Trump had failed. But they were bitterly prejudiced against the meeting from the start, to the point where many insisted that Trump cancel it.

To them, looking at the summit through the lens of “collusion,” the summit could only be the ultimate payoff for Putin’s election meddling in 2016.

But viewed through the lens of diplomacy, the summit was a milestone in U.S.-Russia relations.

Judging from their remarks at the press conference that followed, the two leaders touched on every major important area of foreign policy:

President Trump, as promised, challenged Putin on the subject of Russian interference in U.S. elections. It was Putin, not Trump, who pointed that out — adding: “I had to reiterate things I said several times, including during our personal contacts, that the Russian state has never interfered and is not going to interfere into internal American affairs, including election process.”

Putin also volunteered the information that Trump had insisted the Russian annexation of Crimea was “illegal.” So much for appeasement.

Trump was also aggressive on the topic of Europe. Having just come from the NATO summit, where he berated Germany over buying gas from Russia while relying on America’s protection, Trump announced that the U.S. would compete with Russia to sell gas to Europe.

That is a major challenge of geopolitical significance, a sign the U.S. is going to use its technological edge in oil and gas production to boost Europe’s economic independence from Russia. All Russia has, Trump noted, is the advantage of location.

At the press conference, only the Russian journalists — who do not enjoy press freedom — asked questions relevant to foreign policy.

The American journalists, who are theoretically free to think freely, devoted nearly every single question to allegations relating to phony charges of Russian “collusion” with the Trump campaign, including the latest developments in Special Counsel Robert Mueller’s probe. Their concerns had little to do with U.S.-Russia relations and everything to do with domestic U.S. politics.

Trump’s critics are seizing on a single phrase: “I have great confidence in my intelligence people, but I will tell you that President Putin was extremely strong and powerful in his denial today.”

He never “attacked” U.S. intelligence agencies, nor did he explicitly take one side over the other. He said that he trusted Putin — as he should have done, if his goal was to improve relations. He added that “I don’t see any reason why it would be” Russia who carried out the hacking, nudging Russia toward a less adversarial posture.

Trump-haters are also pretending that Trump somehow elevated Putin by granting him a one-on-one meeting. Putin does not need the U.S. to make him more important. He has a massive nuclear arsenal. He just handed out the trophies at the FIFA World Cup. He has military bases in strategic points in key conflict zones.

The question is not whether Trump should have met Putin but rather why they had not met sooner, given the fact that certain U.S. interests in 2018 cannot be achieved without cooperating with Russia.

It is worth noting that in meeting with Putin, Trump was honoring an explicit campaign promise.

Whatever the merits of that approach, the fact that Trump kept his word increases his credibility, at home and abroad.

Conservative critics — including myself — suggested at the time that Trump’s approach would fail, for the same reasons Obama’s “reset” had failed: namely, that the two countries have several divergent interests and values that transcend any particular pair of leaders.

But Trump has built an advantage that Obama never enjoyed by showing Putin that he is prepared to use the U.S. military to back American interests. That caught Putin’s attention and showed him he has at least some interest in cooperating, for now.

The meeting was also noteworthy for what was not said. Putin complained about the U.S. pulling out of the Iran deal, but he was quiet about reports that the U.S. had killed hundreds of Russian military contractors in Syria (without losing a single American). Putin also said nothing about U.S. airstrikes against Bashar al-Assad’s regime in Syria.

He dared not complain. That is because, far from being weak, Trump has been tougher than his predecessors toward Russia, letting his actions speak louder than his words.

The ultimate test of the Helsinki summit lies in the future. The Soviet Union was thought to have “won” the historic conference in Helsinki in 1975, until the human rights provisions of the Helsinki Accords helped bring down communism.

What is clear already is that Trump advocated for American interests without conceding anything to Putin other than his dignity.

Trump’s critics, who are reduced to worrying that a soccer ball could be used to spy on the U.S., are hysterical precisely because they know he succeeded.

Joel B. Pollak is Senior Editor-at-Large at Breitbart News, and the co-author of How Trump Won: The Inside Story of a Revolution