THE LOATHSOME GHOULS OF THE WHITE HOUSE PRESS CORPS 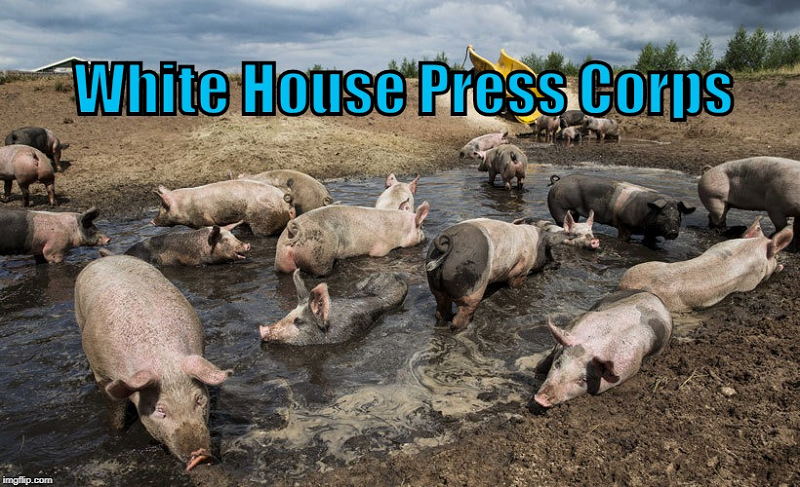 Well, there is Antifa, the violent arm of BLM, the Muslim Brotherhood, et al., but for what is supposed to be an assemblage of professional, objective journalists, this White House press corps is about as mature as a clique of mean girls in any middle school.

They are as politically deluded as Baghdad Bob, pathetically self-important, ridiculously overly impressed with their own positions of power and influence, and as malicious as Shakespeare’s Iago.  When they do not get their way, they act out like toddlers in the throes of a tantrum.

This has all been true since Donald Trump announced his candidacy for president.  In their view, so presumptuous was his foolish attempt to be president that they set out to sabotage him from moment one, to utterly destroy him by any means necessary.

The long list of their failures in this endeavor is legion and would be humorous if it were a Dickens novel, but it is the White House press corps!

While their glee at the news that Trump had contracted COVID was shameful, their hysteria over his brief ride in The Beast to wave to supporters outside the hospital, their abject fury at his being released from Walter Reed today, was beyond redemption.  These ghouls are seriously mentally ill.  They wanted him to die, and he didn’t.

For example, the New York Times’ Maureen Dowd says Walter Reed’s reputation is in tatters for successfully treating the president.

The WaPo’s Jennifer Rubin wants to defund the military hospital.

The always odious Jim Acosta of CNN now refers to the president as “coronavirus in chief” and slammed him for taking off his mask on the White House balcony, easily a hundred feet from anyone.

Chris Hayes of the always loony MSNBC said Trump’s video urging people not to let fear of the virus dominate our lives was going to “absolutely get people killed.”

The ever-ignorant Joy Reid of MSNBC, like Michael Moore, accused the president of faking the illness.

Joy Behar shrieked that Mike Pence should be sprayed with insecticide before his debate with Kamala Harris on Wednesday.

CNN’s Dr. Sanjay Gupta accused the White House of purposefully “hiding things” from the public.  CNN’s “doctors” have made complete fools of themselves trying to do CNN’s anti-Trump bidding.

Jake Tapper and Chris Cuomo both beclowned themselves, each of them presuming to know more than the doctors treating the president.  They were angry that he was recovering in just a few days.

Meanwhile, as the White House press corps and their fellow activists on cable news channels fume about the president’s quick recovery and his release from the hospital, the Democrats in Congress thought his diagnosis on Friday would be the perfect excuse to derail the nomination of Judge Amy Coney Barrett for the Supreme Court.

New York’s Sen. Chuck Schumer has blustered and bluffed about how the hearings for Barrett should be postponed.  In his dreams.

The Corruptocrats who rule the Democrat party are running out of arrows in their quiver, to quote the most corrupt Democrat of all, Bela Pelosi.

Hillary Clinton’s Russia hoax failed, Adam Schiff’s impeachment failed (it was a cover-up operation — Schiff is up to his neck in that sleazy coup attempt), the illegal release of Trump’s tax returns to the press revealed no dishonesty, the fabricated tale of dissing dead soldiers was a bust because it was a lie, and Bob Woodward’s dull tale was a bust.

Trump has disavowed white supremacists for decades, but they won’t keep saying otherwise; their questions are a thoroughly unwarranted accusation they know is not true, but they hope will stick.

But our White House press corps refuses to ask anyone, least of all Biden, about the former vice president’s health and medication regimen.  But of course they never asked JFK about his Addison’s disease or Clinton about his cocaine habit, which is why neither of them ever released their medical histories.

Joe Biden is clearly suffering from cognitive decline.  He is most likely on a drug cocktail to get him through the campaign and also may well be wired for help from aides during his interviews, town halls, and debates.  That his wife continues to let him pretend to know what is going on around him when he does not have a clue is elder abuse.

And yet not a single White House reporter or cable news anchor has asked any of Biden’s campaign operatives a single question about Biden’s health challenges.  Much less any questions about Hunter Biden or the sexual assault charges by Tara Reade.  They are truly shameless partisans.

They would rather see a mentally compromised man be elected president of the U.S. than let the best president in decades be re-elected because his outsider status, his blunt talk, and his successes offend them.

The “why” of their offense at Trump’s existence is a mystery.  They hated Reagan and the Bushes for equally inexplicable reasons beyond party politics, but Trump has driven them insane.

Watch CNN or MSNBC for five minutes to see just how insane. They have been consumed by hatred, scorn and venom and they embarrass themselves on an almost hourly basis.

The mainstream media has actually been the enemy of the people for many years but the damage they do has escalated and become institutionalized.

It became downright Sovietized during the Obama administration. It fell in with Obama’s race-baiting anti-Americanism, his determination to “transform” this nation into something very unlike the Founders’ vision, and more. Obama hated our Constitution.

For the media, Obama could do no wrong while in fact he was doing terrible damage to the country on numerous levels. But he hypnotized our submissive media and made them his own propaganda machine. Hillary counted on their continued loyalty which she would have had and does have.

The Fake News Media doesn’t just report fake news – they refuse to report news that isn’t fake.  They report nothing about Hillary devising the Russia hoax to derail Trump. She belongs in prison for treason but they will protect her to the bitter end – and her end will be bitter despite the fawning media.

President Trump has done us all favor. His fearlessness has exposed the media for who and what they are, a childish cabal of petty thugs who whine when they don’t get the answers they want from the President or his staff. They will one day reap what they have sown, the opprobrium they deserve.

[Note by JW:  they’ll deserve it far more if it turns out – as RedState’s Nick Arama makes a case for – that it was White House reporters themselves who may be the virus-spreading culprits infectingTrump and his staff, with the White House Correspondents Association (WHCA) announcing three of their members have been tested positive.  The irony of karma.]