THE LESSONS OF FAUCI’S HOUSE OF CARDS COLLAPSE 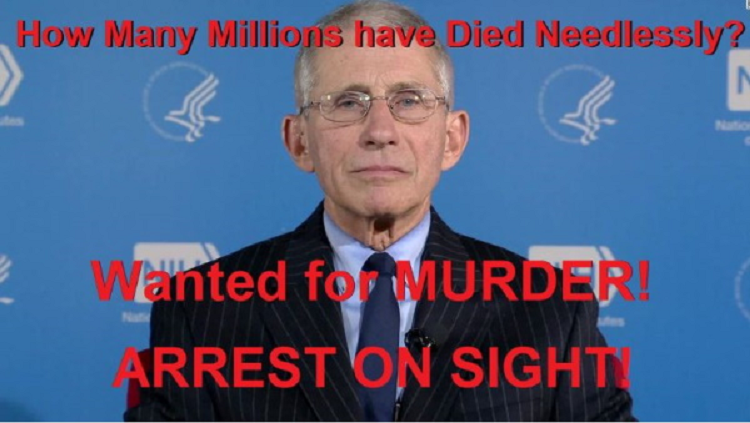 At long last, the deadly reign of Anthony Fauci will come to an end.

That’s because yesterday (9/07) The Intercept, a hard-left publication, released (thanks to its FOIA lawsuit) 900 pages of government documents definitively proving that Fauci used his position to fund gain-of-function research into bat viruses at the Wuhan Institute of Virology (“WIV”)—and then lied to Congress about it.

Since February 2020, the wizened Fauci has been the face of the government’s response to the pandemic. In the ensuing 20 months, Fauci was frequently wrong, incredibly arrogant, and deeply dishonest. Because he was the anti-Trump, though, we were stuck with him.

Democrats, especially, appreciated how he dismissed treating COVID with time-tested and affordable medicines such as Hydroxychloroquine and Ivermectin and, instead, insisted on masks, lockdowns, and mandated vaccines.

Last July (7/20), during a Senate Health Committee hearing, Sen. Rand Paul directly accused Fauci of using his position to fund illegal gain-of-function research at the WIV. The Hill, which reported on the hearing, assured its readers that Paul was making “an unsubstantiated accusation.”

Fauci came out swinging in response to Sen. Paul’s accusation. “Senator Paul,” he said, “you do not know what you are talking about.” He also said, “If anybody is lying here, Senator, it is you.”

You really need to watch this and, as you listen to Fauci, remember that money is fungible and that insights gained from one area of research can easily be applied to another. Fauci’s gift of American funds made the WIV richer and better able to create Frankenstein viruses:

That, of course, is how sociopaths lie—with verve and assurance. Because, in their own conscienceless brains, they are always in the right, whatever they need to say to defend themselves is their truth. People with morals and a conscience can’t do that.

The Intercept aggressively attacked Sen. Paul after the hearing. Glenn Greenwald, who founded The Intercept and then got the boot for being insufficiently totalitarian, posits that it was then that the outlet sought to bolster its attack on Rand Paul by filing a FOIA request against the National Institutes of Health.

What happened, instead, was that The Intercept received over 900 pages of documents showing that it was Fauci who lied.

Richard E. Ebright, a Professor of Chemistry and Chemical Biology at Rutgers, summarized on Twitter what those documents revealed (@R_H_Ebright September 7, 2021):

“The trove of documents includes two previously unpublished grant proposals that were funded by the NIAID, as well as project updates relating to the EcoHealth Alliance’s research, which has been scrutinized amid increased interest in the origins of the pandemic.

The documents make it clear that assertions by the NIH Director, Francis Collins, and the NIAID Director, Anthony Fauci, that the NIH did not support gain-of-function research or potential pandemic pathogen enhancement at WIV are untruthful.”

“Surprise surprise – Fauci lied again.  And I was right about his agency funding novel Coronavirus research at Wuhan.

Read this thread and the papers released. https://t.co/zQizKXLdbd

Last year revealed to Americans that our most lauded experts are idiots and, in the case of Fauci and Collins, highly culpable, dishonest idiots. Everything they told us has been proven wrong, from COVID’s origins, to the lockdowns and masks, to the attacks on affordable early treatments, to the vaccines’ safety and efficacy.

We’ve also learned that all Democrats and some Republicans who have political or administrative power will abuse it.

Democrats weaponized COVID to corrupt our elections and saddle us with a corrupt, senile president who has opened America’s borders, destroyed her economy, creating a glide path for Islamic extremists to come here, degraded America’s standing in the world, handed power to the Chinese, and, in all probability, will give a nuclear pass to Iran.

Assuming America survives as a democratic republic operating under our Constitution, Americans must take stock of everything they’ve assumed since the Cold War’s end. Here are some of those lessons:

And one more thing: Dr. Fauci needs to go to jail for the rest of his life because, through his funding illegal gain-of-function research, followed by his non-stop stream of dangerous lies, he has the blood of hundreds of thousands of Americans on his hands. Francis Collins can be his cellmate.

Andrea Widburg is the deputy editor of American Thinker.