THE LESSON OF THANKSGIVING 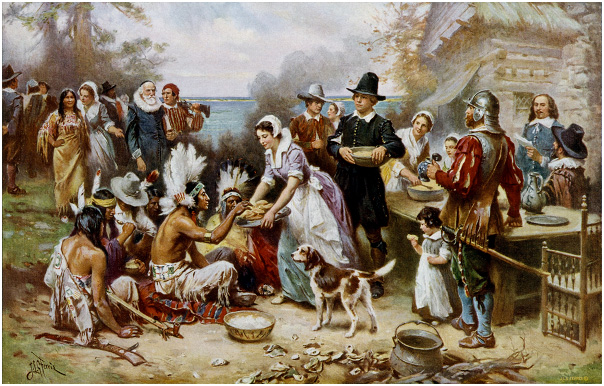 Today, Thursday November 22, is Thanksgiving in America.  A celebration of a bountiful Autumn harvest is an ancient tradition in many cultures.

The Romans celebrated Ieiunium Cereris, dedicated to Ceres, the goddess of agriculture.  The Chinese have been celebrating Zhōngqiū Jié (Mid-Autumn Festival) for millennia.  In Japan it’s Jugoya.  For the Hindus of India, it’s Sharad Purnima.  The Celts of the British Isles celebrated Lughnasadh which is the Harvest Thanksgiving in England and Canada today.

The origin of Thanksgiving in America is traditionally that of the Mayflower Pilgrims at Plymouth Rock.  Yet the Kindergarten school plays all over the country this week, with five year-olds portraying the noble Indian, Squanto, teaching the helpless Pilgrims how to feed themselves, is not how it happened.

So here’s the real history of America’s First Thanksgiving, the extraordinary lesson to be learned from it, followed by a very personal lesson I have learned this year.

The real history of the Mayflower Pilgrims was recounted by their leader, William Bradford (1590-1657) in his book Of Plymouth Plantation, completed in 1647. 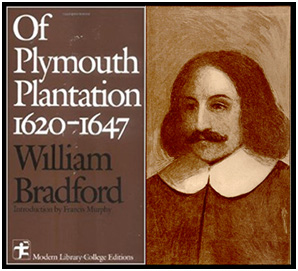 It is from Bradford that we learn of Squanto, who did indeed show the Pilgrims how to “set” or plant corn (a new unfamiliar crop for them).

Reading the real history of the Pilgrims is so revelatory because it is as effective a refutation of socialism and affirmation of capitalism as there has ever been.

But by 1622 they were starving.  There was no “Thanksgiving” that year.  There was the next – for 1623 saw the Pilgrims in well-fed abundance, and thus was the year of the real First Thanksgiving.

What made the difference?  Here are Bradford’s own words (albeit with modern spelling like “been” instead of “bene” – the original spelling is in the link above; the parentheses are his, the explanatory brackets are mine), describing Anno Dom.1623:

There is no better historical lesson of why private property capitalism produces abundance and prosperity, while socialism is, in Winston Churchill’s famous observation, produces the opposite:

“Socialism is a philosophy of failure, the creed of ignorance, and the gospel of envy, its inherent virtue is the equal sharing of misery.”

Now for the personal, which starts with a confession.  I refrained from disclosing this until now, as I didn’t want TTPers to worry about me.

Last March, I was diagnosed with serious prostate cancer requiring immediate surgery to remove my prostate – an operation called a prostatectomy.  This takes months for recuperation, during which I could not lead my expeditions, while I learned the surgery had not gotten everything and watched my PSA levels begin to steadily rise yet again.

Thus I underwent a series of intense radiation sessions with an advanced protocol abbreviated as SHARP (Stereotactic Hypofractionated Accelerated Radiotherapy Post-Prostatectomy), finishing at the end of September.

One month later at the end of October, my doctor pronounced me in full recovery – and that I was good to go, to lead Wheeler Expeditions’ 6th Himalaya Helicopter Expedition and celebrate my 75th birthday during it (see HFR 11/09/18).  Now I am back home with my wonderful wife Rebel.

So you can see I have a lot to be thankful for this Thanksgiving!  Yet there is a far broader lesson that applies to us all.  Life is short, it lasts but a snap of the finger.  We cannot control this fate, but we can control our attitude towards it.

The best attitude, I believe, is to be infinitely grateful to be blessed with existence, to be granted by Providence this one life on earth, to be a part of humanity and its history.  To be in constant awe of the privilege and thrill of being alive.

Americans set aside this one day of the year to give thanks for what they have.  It is an inspiringly important commemoration.  Yet that attitude of being infinitely grateful for the opportunity of being alive is something we can take time to appreciate every day of the year, not just one.

Every day can be our own personal Thanksgiving.  That’s the real lesson for all of us today.