2 The Point News » Guest Authors » Members Only » THE LEFT? SEETHING WITH APOPLECTIC RAGE — THE RIGHT? HAPPY AND OPTIMISTIC

THE LEFT? SEETHING WITH APOPLECTIC RAGE — THE RIGHT? HAPPY AND OPTIMISTIC

Among the many, many things that starkly define the differences between the Left and the right, none is more wretched than the difference in how they approach life.

Leftists, even when they are in power, are generally miserable, discontent with America as it was founded and as it is, always banging their heads against some perceived wall.

Those on the Right, on the other hand, are characterized by general good-natured love of country and the quest to save America from the radical Left’s reprehensible appropriation of the culture, academia, the media, and entertainment.  Conservative people revel in their families, work, and self-reliance and their good fortune to be Americans.  They are grateful people.

Leftists, since the administration of Woodrow Wilson when they first called themselves “progressives,” have been regressive ever since.  They crave the socially stratified societies of the Middle Ages, with an elite ruling class that garners all the wealth and wields the power to tell everyone else how to live.

California has pretty much re-created exactly that today, as have New York and D.C. and its environs.  Even so, all those rich, intolerant liberals are always angry and unhappy.  Since Trump was elected, they are well and truly forlorn.

There are countless “studies” that claim that such differences are genetic, but most have been conducted by partisans with one bias or another and are unreliable.  We know that for at least the last forty years, academia has been run by tenured radicals bent on indoctrination, not education.

When they were busy reformulating American history standards, they effectively deleted Washington and Lincoln in favor of heretofore lesser known persons of color.  Why couldn’t they just add people like Harriet Tubman to the standards without virtually erasing the Founders?

Because they loathe those dead white males who sacrificed so much to see the Constitution drafted and a new nation forged.  The new standards focused only on the negative aspects of American history.  The message?  America is an illegitimate country.

And now?  Because they lost an election and the voters elected an unabashed patriot, the Democrats have deemed Trump an illegitimate president.

The Left hates people who love this country.  Leftists are pounding their fists with fury that their hundred-year progressive campaign led to a Trump presidency.  Nixon was bad, the Bushes were bad, but Trump!  He is the black swan they never saw swimming their way, and he has rendered them disconsolate.

So morose is the Left at the possibility that Mueller’s report will not prove Trump’s collusion with Russia, an entirely Democrat-conceived hoax, that the contemptible Jerrold Nadler and the pitiable Adam Schiff have decided to go fishing for some crime among Trump associates by requesting documents from eighty-one people!

They have no hint of crime, despite their assurances that they do.  Schiff, the most oleaginous leaker in Congress, would have leaked any proof long ago if it existed.  If this does not qualify as a gross abuse of power, what does?

So infuriated by Trump’s victory and his many successes in office, these people are willing to become Stalinist thugs and hope no one notices.  Nadler and Schiff are among the most distressed Democrats in Congress.  They need mental health help.  They are spinning themselves into oblivion.

The American people are not nearly as stupid as Nadler and Schiff think — and are themselves.  As it happens, there is an increasing number of people in Congress who actually are very stupid, shockingly ignorant of the Constitution and American history, and they are getting the most attention of late.

The Left, wallowing in its misery and acting out, is bringing about its own demise.  Yes, Leftists retain a radical, vicious base, those people who are triggered by red hats to violence.

So virulent is this crowd that its members advocate for the absurd Green New Deal offered up by the benighted Ocasio-Cortez, which, if ever implemented, would effectively destroy the economy of the U.S.  As Patrick Moore, the founder of Greenpeace, tweeted: 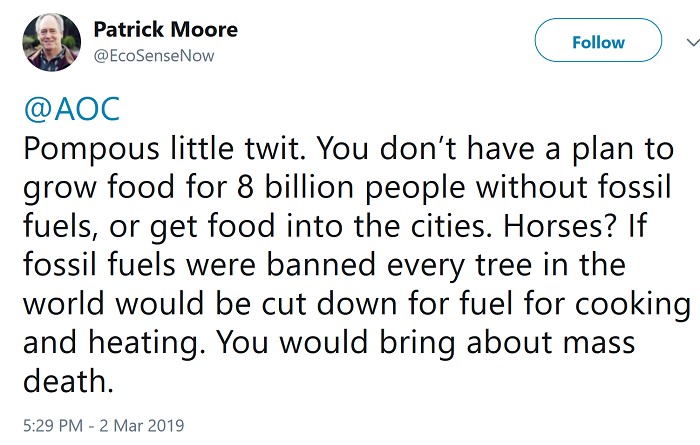 They also want “Medicare for All, ” an obvious scheme to ration health care, to control the health of us peons.

The Left wants people to suffer; that is its goal.  That is how incandescent Leftists are with hatred for the American people, especially those who voted for Trump and are still happy they did.  The cheerless Left has troubled its own house and will inherit the wind.

The people of the Right, and those who have since realized that joy is a good thing, are thrilled by what Trump has accomplished in two years and will re-elect the man with ease.