THE LEFT ARE LOCUSTS OF CULTURE 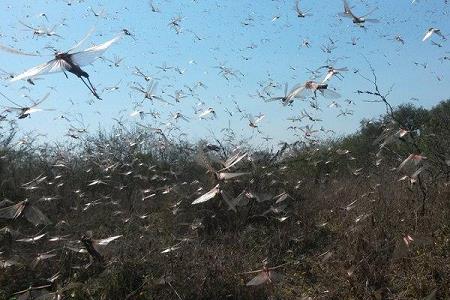 There is a scene in the 1996 movie Independence Day where the character (US President Whitmore played by Bill Pullman) mind-melds with the alien, and receives a sudden understanding of the peril the Earth is in.

“I saw… its thoughts. I saw what they’re planning to do. They’re like locusts. They’re moving from planet to planet… their whole civilization. After they’ve consumed every natural resource they move on… and we’re next.”

For some time now, I’ve thought this applies to the Left.  Certainly, entire fields of endeavor, entire expanses of human knowledge, science, and interest, seem to collapse in the wake of an infestation by the Left.

I used to think this happened because of the Left’s charming habit of hiring only on political conformity, and not on talent, intellectual ability or even interest in the field.

I make my living writing science fiction.  We’ve seen this, in fact, in my own field, where Liberal Arts majors hired by the publishing houses and shunted against their will – or at least their interest – into science fiction and fantasy try to “redeem” the field.

Because they’re all of the Margaret Atwood school of believing science fiction is bug-eyed monsters and women in metal bikinis, they will not read the history of the field; they are not interested in the giants of invention and speculation that once strode the Earth and whose names ring like clarion calls to us, the true aficionados: Heinlein, Asimov, Anderson, even Van Vogt, Simak.

They will deny that women like LeGuin or Anne McCaffrey or even Diana Wynne Jones or their hundreds of followers ever worked in the field.  Instead, without touching what they’re sure is icky material, they set about “civilizing” and gentrifying” us by buying a bunch of their old roommates and friends from college to write “deeply meaningful” and “feminist” and “woke” prose.

Because they don’t actually care how much money it makes.  They don’t want their old professors to laugh at them.  So they must – must – publish what those professors taught them was “good”:  regurgitated Marxist pap.

But if that were the worst of it, they would only collapse those fields to an extent.  In the same way that a blind pig will find an acorn, surely some of these woke-bunnies might still be able to write readable fiction, which means things wouldn’t collapse utterly.

Except that the Left is like locusts.  They can’t help destroying.

In these last weeks, I’ve watched the public meltdown of Worldcon (World Science Fiction Convention) and – more amusingly – how I and my friends in the Sad Puppy insurgency (who withdrew completely from their Hugo awards and their con years ago) get blamed for it.

And on the private side, where many of my friends are people of letters and deeply cloaked in their universities and departments, I get more reports of this sort of bad and infective craziness: departments in the hard sciences worrying about hiring “diverse” instead of the best people for the job; professors and employees who are out of control and say and do the most heinous things can’t be fired because they’re “protected minorities.”

This is far worse than a simple bias in hiring. I don’t know if it’s possible for any field to stand in the face of such an onslaught. Perhaps an unskilled labor field, where it doesn’t matter which pair of hands is doing things, and the requirements are minimal.

Certainly not any field that requires expertise, specialized techniques or even – like mere writing – craftsmanship.

And because they’re everywhere and attacking all at the same time, even in fields of endeavor you’d think would be beneath their notice, we risk a systemic collapse of society.

Yes, sure, many people on our side think that’s what the Left wants.  They’re not even wrong, insofar as there are some on the Left who want it, but the majority?

The majority of Lefties have no idea of the complex interweb of relationships, or the weave of technology, finance and just plain work that allows them their comfortable first world lives.  They have no idea what it would mean if it collapsed.  To an extent, they assume that every time and every place had this quality of life and that their “diversity” will only make it better.

Just like the people in my field can’t comprehend “if the stories aren’t fun no one will buy them, and the company will fold.”

Just like Hollywood and the comics can’t understand that an excess of “Wokeness” will result in bad bottom lines and that it’s not somehow the fault of the public for not buying their nonsense, in the same way – society-wide – they don’t understand that skin color and sexual orientation and gender-identification have bloody nothing to do with excellence in most fields of endeavor.

Being stone-cold racists (and yes, sexists and in a way homophobic, or at least gay-stereotyping) they think that diversity of external characteristics is necessary to diversity of thought and is, in fact, the only way of acquiring it. So they will sacrifice expertise and ability for what they think is an innovative perspective.

But since at the same time they restrict valid perspectives to the ones they agree with, they’re trading expertise and ability for nothing much – except perhaps a tendency to become easily offended, at least looking at the Worldcon kerfuffle where someone got upset at having eis “personal chosen pronouns” corrected.  (Have I mentioned that they don’t understand how language works?)

From the link above on Worldom, try this explanatory paragraph on the “backlash over misgendering a Hugo Award finalist” to see how bad this is:

“Over the weekend, writer Bogi Takács revealed that eir Worldcon 76 bio had been rewritten to misgender em using masculine pronouns. After discussing the situation on Twitter, program division head Christine Doyle replied saying she had taken the bio directly from eir website, which Takács later noted would be impossible seeing as how e never goes by he/him.”

Translation: Takács demands he be referred to as em (him), eis (his), and e (he).  The writer insists on using eir (their).

Worldcon, in particular, is a sign of what happens when people not in agreement with the Left have had enough and withdraw.  Not only does it devolve, fast, but they continue to blame all their problems on people to the right of Lenin.

In the end, locusts want to survive and to make more locusts… and the Left wants the same, which is why no club, no hobby, no field of endeavor will be left alone.

They must enforce their way of thinking and their image of the world everywhere until in the ruins of a destroyed world there stand a group of Leftists discussing the wonders of Marx and preening for the few survivors.

That is a problem we have to face.  Pushback is going to be relatively ineffective and personally difficult for a while, but it has to be done to the extent you can.

And if your field allows you to separate, establish your own company, your own place of work, do so.

Because they’re going to collapse civilization.

We must build under, build around, be over and take the weight when things collapse.  Otherwise, all that will be left is Marxists and like locusts, they neither seed nor build, but just destroy.

Sarah Hoyt lives in Colorado with her husband, two sons and too many cats. She has published Darkship Thieves and 16 other novels.