THE JOY OF BEING OSTRACIZED 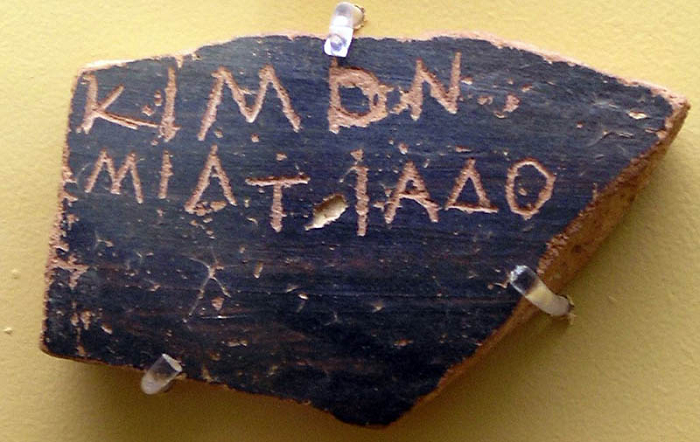 An ostracon used to ostracize someone in ancient Athens

If you voted for Trump, or even were suspected of such, has at least one of the following things happened to you?

*A once close associate (or was it a grandson, uncle, cousin, or in-law?), perhaps even one of your once best friends, suddenly, out the blue, with no warning, texts, calls, emails or writes you a cancel letter, to the extent that you are now tried, convicted and to be punished as a horrific person. Wow. This is strange, you think.

In fact, the provocateur goes on to say that he suspected you were always deranged, or cruel, or xenophobic, and now he has confirmed it during the autumn of 2020. He ends with something like “Don’t ever call me again” (He called you, not vice versa). Or “I don’t want you ever contacting me again” (You never have).

You note that you have never so informed any friend who voted for Obama or Biden with such commensurate cut-offs.

*If you had a Trump sign, a Trump bumper sticker, a (heaven-forbid) red MAGA hat—any sign whatsoever that you might consider voting Trump—you then had a brush with anti-Trumpism hatred.

A stranger flips you the finger; someone in line at the bank pops off, or a maniac cuts you off in traffic—or steals your sign. You’re wearing a MAGA hat walking through an airport. A hoody Antifa-looking punk walks up alongside you, faking interest in talking. Then suddenly he knocks off you cap, screams an obscenity, and runs off in fear you might punch back or follow.

*You watch television, listen to the radio in the car and channel surf. Or you read a blog or web site, and bump into some “genius” ranting about “white privilege,” and “white supremacy.” They add in for scary effect adjectives like “systemic” or “endemic” or “inherent” or “implicit.” Soon the rant reveals not just bias and data-absent analysis but pure hatred from someone well-off and by all accounts privileged. Immediately, as the voice rises and the furor waxes, you go blank.

You instead think of all the past poor or disadvantaged people, whites included, you have met the last half century (in such contrast to the elite voice that is now blaring out on your speakers or whose script is running across the page).

You try to recall your childhood friend who grew up with rotten teeth in a broken-window house in southwestern Fresno County of 1960, or that obese, ill fat-guy on the packing-house forklift you once worked with, or the pump mechanic who asked what the coast was like (he’d never been there, a mere 150 miles away). Then you wonder “Where in the world was all their white privilege?”

*There are certain things you did out of rote but had insidiously been tapering off. Yet suddenly, you inexplicably just quit cold turkey. The NBA became boring, then the NFL. And now MLB is too. Then they all disappeared from your life. Yet you never really noticed, much less missed them, until there was not a trace of them left.

*You become vaguely aware that you have not been to a movie theater since 2015, and haven’t watched a Grammy, Emmy, Tony, or Oscar ceremony in …when exactly? Now you feel zero need to do so, and are neither angry nor sad, but feel mostly nothing.

These referents are about as important to you as a billboard on the freeway. You wonder, for a nanosecond only, how this happened or how little you must have been invested in any of these things in the first place. Were these always mere naked emperors in lavish robes, and suddenly you regained your child clarity, yelling out “They all are buck naked!”

*You were already but vaguely thinking of quitting an increasingly same old/same old club or burdensome association. You were getting tired of dutifully showing up at a particular event. You found yourself watching a television show and enjoying it less, listening to a music group that became monotonous, watching movies of a particular star, and gradually you suddenly and inexplicably taper off.

Then suddenly, there is some sort of mental implosion. You abruptly tune them all out, politely so, but all the more firmly for your years of poorly invested patience. You are not mad, but simply “done with it.” The reaction is only momentarily remorse—a minute or two of regret for “chronicles of wasted time.”

Then comes welcome relief if not euphoria that the virtue-signaling lectures are over, the self-pitying sermons gone, and the victimization schtick zilch!

You  noticed the other day you haven’t watched a major network newscast in ten years, maybe 15 years for 60 Minutes. PBS? Haven’t seen its Newshour in over a decade too. Is Face the Nation or Meet the Press still on? No doubt they remain highly rated. You used to watch both religiously—around the turn of the millennium.

*A once favorite actor, or one of your most enjoyable singers, or an athlete you admired, suddenly became obsessive editorializing about wokism, about every imaginable -ism and -ology. You shrug, well it’s a passing phase, a craze, a hysteria, a flight of reason.

But you bump into this sort of celebrity on the radio—her online, him on the television, both in print. It’s always the same, pure monotony: rich, privileged white people and multimillionaire people of “color” preaching to you about their moral superiority or victimization or childhood trauma, suddenly connected to your abstract sins–and those of your parents and their grandparents and their great-great grandparents.

Then it hits like a brick—they were, or are, boring, silly, little people and you were, or are, proverbially “done.” No more Prince Harry psychodramas. No more Oprah’s “stories.” No more Bill Gates pontifications.

No more Dr. Fauci with his blowing-with-the-wind twists and turns, as the posse nears his gain-of-function hideout. No more any of our contemporary madness. So in Robert Graves’ fashion, you sigh “Goodbye, to all that.”

As the clutter recedes, your now emptied mind sharpens. Tensions fade, little is missed. Less is regretted. Ostracism is pleasurable. Their dislike is praise. You don’t “have” to do, listen to, anything.

In a way, you have turned 1984 on its head and upside down: “But it was all right, everything was all right, the struggle was finished. He had won the victory over himself. He loved being cancelled, deplatformed and ostracized by Big Brother.”