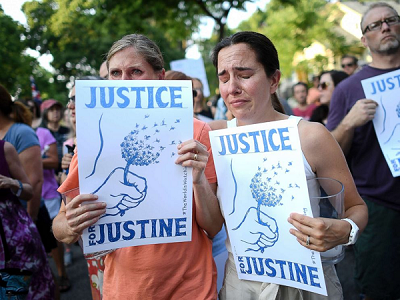 This picture is of people marching in honor of Justine Damond of Australia, shot and killed by a Somali Moslem police officer without cause in Minneapolis on Saturday July 15.

What would justice for Justine truly be?  For the Islamophilic mayor of Minneapolis to the entire nation to recognize that Islamophobia kills.

In reality, however, it is not in the business of spreading “anti-Moslem bigotry.” Instead, it propagates the idea that Moslems in the U.S. are the recipients of widespread discrimination and harassment, and so must be accorded special accommodation and consideration.

That idea has just taken the life of Justine Ruszczyk Damond, a woman from Sydney in the prime of her life at age 40. 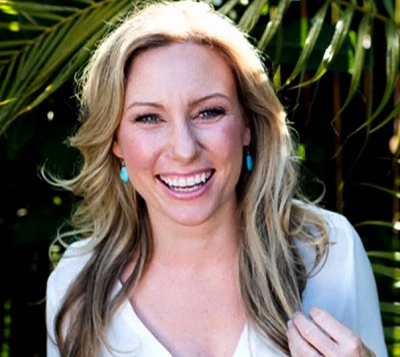 Damond called 911 in Minneapolis Saturday night to report what she thought might be a rape outside her apartment building.  Here’s what happened as reported by the BBC:

“Local media reported that Ms Damond was dressed in her pyjamas and had approached the driver’s side door to talk to the officer at the wheel after police arrived.  Officer Mohamed Noor, who was sitting in the passenger seat, fired his weapon across his partner and through the driver’s door, striking Ms Damond in the abdomen.”

Let that sink in.  Noor was sitting in the squad car’s passenger seat.  He fired his weapon across his partner and through the driver’s door, killing an unarmed blonde woman in her pyjamas.

“I want to take a moment to recognize Officer Mohamed Noor, the newest Somali officer in the Minneapolis Police Department. Officer Noor has been assigned to the 5th Precinct, where his arrival has been highly celebrated, particularly by the Somali community in and around Karmel Mall.”

Hodges was excited about Noor because he represented a religious and ethnic group that she was anxious to court. Mohamed Noor was a symbol of everything that Minneapolis officials valued most.

They could point to him and say: See? We are not “Islamophobic.” We celebrate diversity. We love our Somali Moslem community, and when they see how they are loved, they will end all jihad activity, because violent jihad is just a reaction to injustices that Infidels perpetrate.

And so it was very important to the Minneapolis Police Department, and to city officials, that Mohamed Noor succeed. He graduated from a fast-track program to get onto the force in the first place. They had to have him.

But his competence as a police officer was always secondary to his ethnicity and religion. And even if he didn’t graduate, nothing would be done. To have removed him would have been “Islamophobic.”

Noor proved to be an incompetent police officer. There were three complaints against him in two years. A neighbor reported:

“He is extremely nervous … he is a little jumpy … he doesn’t really respect women, the least thing you say to him can set him off.”

When the neighbor heard that Noor was the cop who had shot an unarmed woman, he wasn’t surprised:

“When they say a policeman shot an Australian lady I thought uh oh, but then when they said who it was, I was like, ‘OK’.”

None of this mattered. Noor could have marched into Minneapolis Mayor Betsy Hodges’ office and announced that she would henceforth be his infidel sex slave, and he would have remained on the force.

Justine Damond suffered the consequences of this identity-based policing.

If the Minneapolis Police Department hired and fired police officers based solely on their fitness for the job, and not on their usefulness as symbols of Minneapolis’ commitment to diversity and resolve to fight “Islamophobia,” Justine Damond would be alive today.

Even in the wake of Justine Damond’s death, Minneapolis multiculturalists aren’t about to reconsider their religion. They are doubling down.

Hodges immediately recognized — as authorities do everywhere after jihad attacks — that the real victims are not those who were killed or wounded, but the Moslem community. She wrote on her Facebook page:

“To the Somali community: I want you to know that you are a valued and appreciated part of Minneapolis. I stand with you and support you. The strength and beauty of the Somali and East African communities are a vital part of what makes Minneapolis so strong and beautiful. I am grateful to be your neighbor.

This week a Somali police officer, Officer Mohamed Noor, shot and killed a woman under circumstances we don’t yet comprehend. Justine Damond’s death was tragic and awful for everyone. And I want to be very clear that Officer Noor, a fully trained officer in the Minneapolis Police Department, won’t be treated differently than any other officer.

Justine’s death is a tragedy for our city. We cannot compound that tragedy by turning to racism, xenophobia, and Islamophobia.

It is unjust and ridiculous to assert that an entire community be held responsible for the actions of one person. That will not be tolerated in Minneapolis. If you are experiencing discrimination, you can file a complaint at http://www.minneapolismn.gov/civil…/discrimination-complaint.”

Hodges should have issued a statement saying that she recognized that Mohamed Noor was not hired because he was competent, but because he was a Somali Moslem. And that she sees now that Leftist social engineering on the police force costs lives.

She should have promised that from now on, police officers will be hired based on their fitness for the job, not their religion or ethnicity.

Instead, she is behaving as if a non-Moslem police officer had shot an unarmed Moslem woman. But that’s not what happened.

And in issuing this warning, Hodges is only reinforcing the false premises that led to the killing of Justine Damond in the first place: the idea that Moslems are a victimized, persecuted community that needs special consideration such that an incompetent Moslem police officer had to be hired.

This just ensures that in the future, there will be more innocent people who die at the hands of Minneapolis police officers who are on the force more for their symbolic value than for their competence. Thank the Islamophobia Industry.

Robert Spencer is the director of Jihad Watch and author of the New York Times bestsellers The Politically Incorrect Guide to Islam (and the Crusades) and The Truth About Muhammad. His latest book is The Complete Infidel’s Guide to Iran.