THE INCONVENIENT TRUTH OF MASKS AND SOCIAL ISOLATION 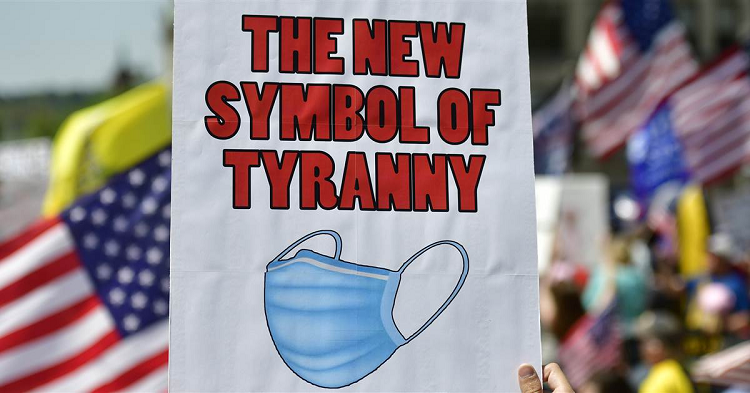 There’s no better way to destroy a country than to turn its citizens into faceless nameless automatons fearful of doing or saying the wrong thing.  Dress them all the same, take away their individuality.

It worked for Mao and Stalin and Pol Pot and legions of dictators since the beginning of time.  They knew that if you could condition people to depend upon the state and state-run media for the approved party line, if you could convince them to believe only state-approved ideas, they would be putty in your hands.

From the earliest days America was different.  We were the country of rugged individualists with people who refused to give up their liberty for a little safety.  We were a country of people who prided themselves on their ability to think for themselves, to command their own destiny.  We had thrown off the chains of tyranny at great sacrifice and the result was a country that became a magnet for people who yearned to breathe free.

But for the last seventy or eighty years the drumbeats from within this country to tear down America have become louder.  The anti-establishment children of the 60’s have become the leaders of today.  Helped by the media and social media the beliefs that America is a racist country, that capitalism is an inherently unfair system, that America deserves to be destroyed have become ever more mainstream.

Contrary ideas have become “hate speech” that must be stopped.  People who espouse those ideas must be “cancelled.”  Diversity is more important than merit in selecting employees.  Or in selecting leaders.  People are afraid for their jobs if they speak their mind.  They fear for their safety if they oppose political correctness.  The result is de facto censorship.

Still, we managed to retain our exceptionalism…until the Chinese Communist Virus, CCV for short.

The threat of a deadly virus amplified by a complicit media created a population that began to live in fear of their neighbors and friends, a population who quickly became desperate for anything that would protect them from a terrifying disease that, so the media wrote, was worse than the flu epidemic of 1918.  The only hope, the only way to avoid wagons collecting dead bodies in the streets was by using masks, avoiding crowds, staying away from strangers, instituting lockdowns, forbidding gatherings.

(The definition of a lockdown, per Google, is: ”the confining of prisoners to their cells, typically after an escape or to regain control during a riot.”)  These draconian measures were grasped at by a frantic and terrified populace like the proverbial drowning man clutches at a straw.

But masks and social distancing have serious societal consequences.

There is a medical condition in which some individuals are unable to recognize faces.  Known commonly as face blindness, the medical term is “prosopagnosia.”  People with prosopagnosia can’t match a face they are seeing with any other face they have seen before.  The inability to connect with a stranger or even a casual acquaintance who is wearing a mask is one of the principle collateral damages of masks.  It is mandated prosopagnosia.

In the words of the French political philosopher, Pierre Manet, “It is by the face that each of us reveals himself or herself at once as a human being and as this particular human being. The visibility of the face is one of the elementary conditions of sociability, of this mutual awareness that is prior to and conditions any declaration of rights.”

The final nail in the coffin of the social compact is “social distancing.”  No more handshakes, no more hugs, no touching.  Ooooh, no touching.  Social isolation is here.  Touch no one. Trust no one.  Stand in that little circle at the checkout line and don’t you dare get any closer.

The problem is the idea of “social distancing” that dictates a six foot no-contact zone is based on papers written more than 80 years ago.

Thanks to the CCV and the response of the politicians and the media, our world is reduced to the people in our immediate circle that we know well.  You know the result.  Curt sales associates performing tasks for which they know they cannot be held accountable because they cannot be identified.  People who shy away from you in supermarket aisles as if you had leprosy.  No talking amongst yourself.  Prisoners will keep quiet.

Combine that with mandated solitary confinement and you have created a world where people are fearful of strangers and no longer interact with them.  With that gone, people increasingly get their information from the media, a media that are overwhelming skewed to the left.  A media that disseminates the party line as news.

Thanks to the threat of a virus that came along just at the right time, the concept that contrary ideas constitute hurtful speech and the increasingly real cancel culture, a world has been created where people are more easily manipulated.  Coincidence for people and countries who would like nothing more than to see America destroyed?  Perhaps.  But a fortuitous coincidence indeed.

And you don’t even need to worry about dressing everyone the same.

As a physician I understand the seriousness of becoming infected with COVID, but I also know there are a host of other viral infections that can kill elderly people and people with co-morbidities.  How is it that all of the other seasonal flu infections suddenly disappeared last winter and that anyone who was sick with a cold or a cough immediately became a COVID patient?

Preliminary estimates from the 2019-2020 flu season by the CDC range from 24,000 to 62,000.  Obesity, smoking, poor nutrition are all serious risk factors for elderly people, at least as potentially fatal as the COVID virus.  Smoking is regulated but not outlawed and as yet there are no laws limiting food intake.  Why does the government only want to protect you from some diseases and not others?

There is no consistency.

Masks are not perfect protection against any virus.  The best mask is better at preventing a sick person from spreading the virus than it is to keeping the virus away from someone who is well.  Even the vaunted N95 mask.

Almost nothing is said about the necessity of good nutrition, of taking Vitamin C, Vitamin D and Zinc.  Of careful handwashing and the use of sanitizers.  Of personal responsibility.

Government is not your Mother or your protector.  There will never be anything that any government can do, not seat belts, not motorcycle helmets, not food pyramids, that will reduce the risk of dying to zero.  Big government is just not that powerful.

Richard Foxx is a physician practicing in Santa Fe, NM.  He is board-certified in Obstetrics and Gynecology and limits his practice now to Wellness Medicine, Hormone Replacement Therapy and Health Counseling.  He has been a TTP’er for more than 13 years!