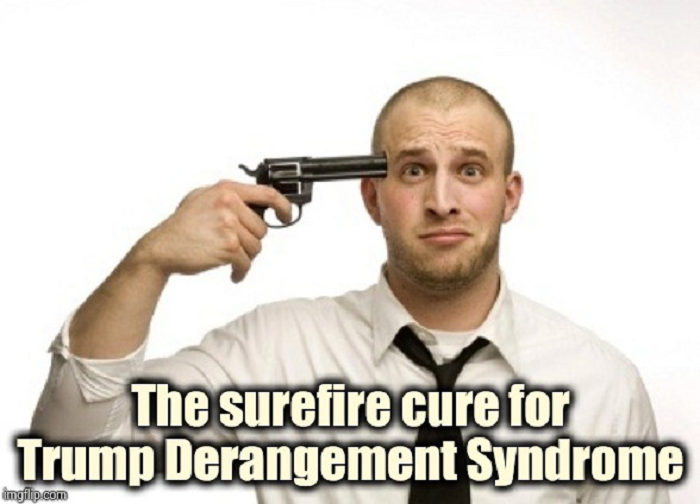 Think about it: For about five years, anything candidate, president-elect, and President Trump said or did, the media, the Left, and progressive popular culture opposed in Pavlovian fashion.

Anything that Trump touched was ridiculed or discredited—regardless of evidence, data, or cogency. The merits of a Trump policy, a Trump assessment, a Trump initiative were irrelevant—given the primordial hatred of the Left of all things Trump: the president, the person, the family.

Under the reductionist malady of Trump Derangement Syndrome, facts and logic did not matter. Instead, anything not said or done in opposition to Trump empowered the supposed existential Trump threat.

Ironically, some of the most deductive and reductionist Trump haters were supposedly professionals, the highly educated, and the self-proclaimed devotees of the Enlightenment. And yet in their uncontrolled aversion and detestation, they suspended all the rules of empiricism, logic, and rationality—and hundreds of thousands of Americans died as a result.

Just as pathological, they don’t care at all. They have no remorse whatever.

The apparently sane went completely insane in their irrational hatred of Trump. Governor Andrew Cuomo (D-N.Y.) destroyed his career in trying to predicate his crackpot policies in opposition to Trump. Anthony Fauci tarnished his distinguished career by his anti-Trump triangulations.

The obsessed Lincoln Project grifters were rendered utterly disgraced, the NeverTrumpers were left irrelevant and inert by their irrational and uncontrollable venom.

Yet, existentially hating everything Trump said or did—as opposed to expressing political opposition to him and his policies—did not just implode elite careers. It also turned deadly. The result of such knee-jerk revulsion was a great deal of damage to the country in general and unnecessary deaths of Americans in particular.

For over a year, anyone who questioned the official NIH/NIAID/Fauci narrative that the COVID-19 pandemic was the result of a new viral mutation that had jumped to humans from bats (or pangolins)—perhaps carved up in the Wuhan wet market—was attacked both personally and professionally.

Why? Mostly because Trump himself had questioned just that improbable hypothesis. And Trump certainly could not be right. But even if he were, it was still the moral thing to say he was not.

Connecting the dots of a biosafety level-4 virology lab, at or near the first recorded cases of COVID-19, was a mortal sin—simply because Trump had alleged just that.

Instead, we were to discount the twisted relationships between:

*the known gain-of-function viral research going on in the lab, the absence of any known animal infected with the SARS-CoV-2 virus,

*the connections of the lab with the Chinese military,

*the systematic efforts of the Chinese Communist government and the World Health Organization to lie about the origins and nature of the virus,

*and the conflict-of-interest statements, behaviors, and policies of prominent American health officials who routed funding to gain-of-function research at Wuhan.

Instead, we were to believe a Chinese/American media-fed narrative of a sick bat, far from Wuhan, infected with SARS-COV-2 (any such culprits are as yet still undiscovered) that jump-started a chain of mutations that eventually turned the pathogen into a human strain that became a highly infectious pandemic in a way not seen since the Spanish flu over a century ago.

Had the country removed such knee-jerk, venomous hatred from the equation, and instead encouraged scientists to examine the evidence in disinterested fashion in early 2020, then we might have known what we are only beginning to learn now—a year earlier and with hundreds of thousands of Americans perhaps still alive.

In the months when COVID-19 was sweeping the country, frontline doctors the world over were desperately seeking to recalibrate known drugs, through modeling and theories that they possessed anti-viral or anti-inflammatory properties useful for either attenuating the virus or ameliorating the lethal “cytokine storm” immune reaction.

Doctors in poor countries such as India were attracted to one, hydroxychloroquine, an old, cheap, anti-malarial drug, generally recognized as safe and also known for its efficacy in treating inflammatory diseases such as lupus.

When stories surfaced that both American and European doctors had independently claimed clear effectiveness of the drug in treating some COVID-19 patients, Trump in reaction tweeted that it couldn’t hurt to take the drug, either as a medicine or a prophylactic. Rumors swirled that he had taken the drug himself.

Furor ensued. Outrage followed. And soon the time-tried hydroxychloroquine was considered an existential evil on par with Trump himself.

Prior to Trump, the drug had been hailed by the United Nations as an essential medicine, especially in poor countries for its dirt-cheap cost, effectiveness, and general safety.  Suddenly it was now considered little more than a toxic witch’s brew.

Fauci’s legions demonized the drug and soon it sometimes proved illegal for doctors to prescribe hydroxychloroquine for off-label usages.

“Double-blind” studies supposedly “proved” that the drug was useless, even though there was not comprehensive research conducted at different dosages and at different stages of the COVID-19 disease.

Additional reports from India that some doctors there felt that the sudden widespread use of hydroxychloroquine and the anti-parasitical drug Ivermectin were responsible for decreases in COVID-19 lethality were likewise mocked.

Now we read on June 2 that a new study conducted at the Saint Barnabas Medical Center, New Jersey, found that when the dosages of hydroxychloroquine were calibrated and adjusted by patient weight, and fortified by the antibiotic azithromycin, there was an almost 200 percent increase in survival rates among COVID-19 patients—without any correlation to heart arrhythmias.

More specifically in this context, maverick frontline doctor and infectious disease specialist Dr. Stephen Smith, of the nonprofit Smith Center for Infectious Diseases and Urban Health, recently argued that perhaps 100,000 lives might have been saved had the medical guild not demonized the drug and utterly dismissed it.

Note that we are learning that once-heralded, far more expensive and difficult to administer drugs, such as plasma therapy and Remdesivir, offered little efficacy in treating COVID-19.

Why were the latter drugs considered legitimate experimental protocols in desperate times to treat the seemingly untreatable disease, but not hydroxychloroquine? The answer is that Trump advocated the latter and not the former.

Ergo, the safe, cheap and well-known hydroxychloroquine was transmogrified into deadly and useless, and “the jury is still out” on plasma therapy and Remdesivir.

We are now in a surreal relationship with Russia. Vladimir Putin is capable of anything and everything, especially when appeased as the Obama Administration’s 2009-2015 “reset” policy demonstrated.

But we know now that he and Donald Trump did not conspire or “collude” to rig the 2016 election, despite the false assertions of the charlatan Christopher Steele, the media, the FBI hierarchy, John Brennan’s CIA, Director of National Intelligence James Clapper, and multiple top officials in the Obama Justice and State Departments.

In a Trump nanosecond, we went from the prior Obama appeasement of Putin….

Or is that too kind an appraisal, given Obama’s own hot mic, quid pro quo deal with Putin to put the interests of his own reelection campaign above U.S. national security—specifically dismantling missile defense in Eastern Europe if Putin would only calm down and give Obama space during his reelection efforts…

To a Cold War-style “Russian Under Every Bed” national mania.

The result was that the Left talked loudly and insanely about Russian “collusion” while carrying a tiny twig.

The most dangerous formula in foreign policy is to aggravate, goad, and incite a volatile enemy (with 7,000 nuclear weapons), with no intention of keeping him cornered and caged.

Before Trump, we had the Obama reset appeasement of Putin. After Trump, we do again. In both cases, we also get the obligatory anti-Russian rhetoric in a way not accorded to the more dangerous Chinese Communist government.

The hackers are diabolically clever and do some of their damage on the following assumptions:

1) an American-obsessed Putin is providing them sanctuary, and in return, they are according him with “deniability of culpability” as fake-independent contractors;

2) both bad actors believe that the Biden Administration, with its carry-over Obama people, will talk trash but in reality either pay ransom to stop the hacking, ignore it, or claim it is a “private industry” matter; and

3) the hackers assume that, secretly, the American Left sympathizes with the hackers’ cynically selected targeting of “fossil fuels” and “environmentally incorrect” meat consumption.

It is almost as if the hackers are saying to Americans, as they cause continental damage and disruption and endanger lives, “What do you care, since your government canceled your own pipelines and is demanding less meat consumption? So why get mad at us for speeding up the implementation of your own agendas?”

If, as some 15th-century Spanish Inquisitor, you damn Trump as a Russian collaborator on no evidence, devour nearly two years of his administration in collusion conspiracies and impeachment, and ignore the fact that Trump had been harder on Russia than any prior president (e.g., more sanctions on the Putin apparat, sales of lethal weaponry to the Ukrainians, efforts to depress oil prices by massive new fracking, pulling out of asymmetrical missile treaties, killing Russian mercenaries in Syria, etc.), the result:

You have destroyed any workable relationship with Russia, pushed it into a de facto alliance with China, and ended up with the sort of dangerous hacking attacks that we now endure and apparently will not or cannot prevent.

The lethal examples of the wages of irrational and deranged Trump hatred are nearly countless.

A once calm Trump border is now the scene of utter chaos, misery—and death—as the erstwhile advocates of immigrant children abruptly grow mute.

A once calm Middle East and the successful Abraham Accords disappeared and were supplanted by mayhem, death, and destruction.

A once-booming energy sector and inexpensive fuels are now mired amid spiking prices at the pump, an end to new federal gas and oil leases on federal lands, the Alaska National Wildlife Reserve put off-limits, and pipeline projects canceled.