THE GOOD NEWS ON GUNS 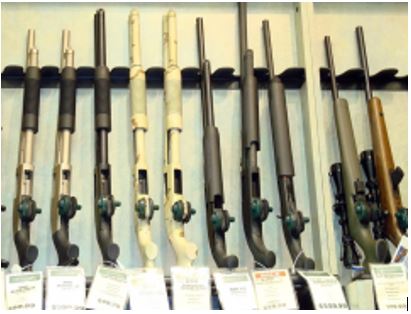 You know the sardonic reassurance:  “When seconds count, the police are only minutes away.”  Well now, that’s if they ever show up at all.

It’s increasingly clear to the average American that if riots come to your neighborhood, you’re on your own.

Consequently, as violence appears to surge in America’s cities, millions of Americans have become first-time gun owners.  Call it the riots’ silver lining.

There are two trends at work which are making Americans doubt government law enforcement is reliable and effective.

Homicide rates in New York, for example, have surged among accusations of a “police slowdown.” A number of police departments (including those in Los Angeles and Atlanta) are rumored to be using strategies such as the “blue flu” in which police personnel pretend to be ill as a negotiating tactic for staunching the deluge of leftist political attacks on them.

But even when police personnel are able, there are not enough of them in most cases to truly address ongoing nightly violence in many cities. And in some cases, elected officials, like in Portland and Chicago, appear either uninterested in confronting rioters with much enthusiasm at all, or they’re on the rioters’ side.

It easy to see how ordinary Americans could look on current events with increasing alarm. On August 29, unarmed Trump-supporter Aaron Danielson was murdered by Antifa protestor Michael Reinoehl among the many who have been protesting, rioting, and looting in Portland for more than three months.

Two weeks ago, a truck driver sustained serious injuries, also in Portland, when he was attacked by a group of “protestors” while reportedly attempting to help a woman who was being robbed.

Last week in Kenosha, protestors were seen attacking a teenager who had been attempting to protect businesses from looting and vandalism. The teen reportedly opened fire in self defense.  In Washington, DC, a mob threatened restaurant patrons, and in Minneapolis, dozens of businesses have been burned and looted.

But even before the current rash of arson, looting, and violence, the police response to serious crime was never terribly impressive. For violent crimes, studies have shown police may take up to an hour to respond more than one-third of the time. (This summer, response times for the NYPD are up by four minutes, compared to last year.)

And if one survives an attack from violent criminals, one shouldn’t assume justice will be done. Fewer than half of violent crimes are ever “solved” in the United States.

According to new estimates from the National Shooting Sports Foundation, using the FBI’s National Instant Background Check System, “there were over 12 million guns bought in the first seven months of 2020—up more than 70 percent over the same time span in 2019. This number is likely to include nearly 5 million first-time gun owners so far this year.”

Moreover, as noted in an unsigned editorial at the Wall Street Journal,

Gun retailers saw a 95% increase in firearm sales and a 139% increase in ammunition sales in the first six months of this year compared with the same period in 2019.

Statistically, it remains unclear that life for the average American is much more dangerous this year than it was over the past five years. After all, in 2014, the homicide rate in America hit a 51-year low.

But the American public has never been one to sit back and conclude everything is fine just because homicides are relatively low.

After all, gun purchases were already surging even before the apparent killing of George Floyd touched off a wave of protests followed by riots and looting. Gun purchases that had been fueled by general uncertainty and anxiety over the Covid-19 panic soon became gun purchases fueled by far more immediate fears of violent crime.

Also notable is the NSSF reporting that 58 percent of the new firearms purchases were by black men and women, while “women comprised 40% of first-time gun buyers.”  They need to protect themselves from the BLM too.

Needless to say, these trends are going very much against the grain of the usual narrative employed by gun control advocates; a narrative that generally employs several main tenets we’ve seen many times. They include:

And while opponents of private gun ownership rarely say this explicitly, the sum total of their narrative is this: only police and military personnel should own guns. Citizens must be disarmed so Big Brother can control them.

But as so often occurs when there are riots—as happened in both Ferguson (in 2014) and Kenosha (in 2020) police officers and other government “public safety” personnel mostly just protect government property. The private sector must just fend for itself.

Many Americans appear to have gotten the message. Not a moment too soon.

Ryan McMaken is a senior editor at the Mises Institute.