THE FUTILE RAGE OF THE NEVER TRUMPERS 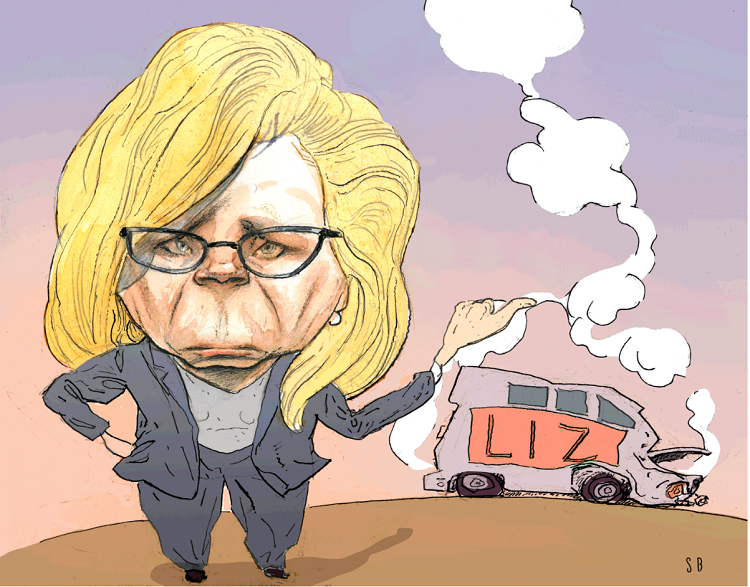 The suicide plunge of U.S. Representative Liz Cheney (R-Wyo.) appears to be the psychopathic backlash of NeverTrumpers.

They are starting to realize Donald Trump’s defeat in November and the allegations he was attempting to overturn the election by provoking an “insurrection” at the Capitol on January 6 do not bring back the Republican Party of the Bushes and McCain and Romney, as those families seem to imagine.

This is only the first shoe dropping. It will soon be followed by the realization of the role the NeverTrumpers have played in shackling the country and the Western world to the unfolding disaster of the Biden presidency.

Cheney reminds one of Brutus charging out of the Roman Senate on the Ides of March, 44 B.C., holding up two bloodied knives and expecting to be applauded after proudly shouting to a distracted group of observers that he had assassinated the tyrant.

She acknowledges voting in support of the Trump Administration over 90 percent of the time, but that her reverence for the rule of law requires her to oppose the “Big Lie.” This lie, she insists, is that there is some question about the legitimacy of the election result.

She also holds that there can be no question that Trump attempted to launch a violent assault on the vital processes of the U.S. electoral process by inciting the invasion and vandalization of the U.S. Capitol on January 6.  Cheney endlessly repeats her faith in the rule of law as the justification for her mortal opposition to the president whom she claims to have voted for just six months ago.

This faith in law did not propel her to object to the lawless assault upon Trump by the authors of the Trump-Russia collusion fraud or the first spurious impeachment of him. It is rather the last refuge of someone willfully sacrificing a congressional leadership position to be a useful idiot for the Democrats.

This, as they seek, through their iron-fisted control of the national political media, to maintain the Real Big Lie—namely, that the November election’s results have been carefully and impartially reviewed by the courts, and that the ex-president incited an insurrection on January 6.

Since—as with Brutus, who shortly had to flee Rome never to return—the majority of Republican voters are not persuaded of the fairness of the election or the effective and dispositive performance of the judiciary, or the anti-Trump take on January 6, Cheney is reduced to taking comfort from the efforts of the cheerleading choristers like Peggy Noonan, telling Cheney and Noonan’s readers that Trump really doesn’t represent many people and is fading quickly.

There isn’t much evidence of this and, in any case, it should not be counted upon in the face of Joe Biden’s crumbling regime.

A very large number of Americans are disconcerted to see gas lines or gas station closures for lack of fuel over the entire east coast, and the Russian thugs responsible for the closure dutifully paid their ransom money by the hacked pipeline’s owners.

They are disconcerted by a 944 percent increase in April, year over year, in illegal entries across the southern border. They cannot fail to notice a 75 percent shortfall from projections of new jobs for April. Nor can they be assured by a rate of inflation, if properly calculated, of approximately 12 percent.

This is the emerging level of performance by the new administration that will cause recollections of President Trump to become fonder rather than more censorious.

The Real Big Lie seeks to suppress the fact that all 29 of the lawsuits over the presidential election that addressed the integrity or constitutionality of the electoral counting process were left unadjudicated. They were not heard for process reasons: late filing, lack of time to hear them, the wrong defendant, the procedural finding that challenges had to begin at the lowest courts and wend their way upwards, or lack of standing to hear the cases.

Most of these objections were spurious and cowardly. The fact is, the judiciary abdicated its duty as a coequal branch of American government. It presumably did so for political reasons as overturning a presidential election result would indeed have been extremely controversial.

But that is not the role of the justices of all the courts involved—they have not been placed in their life-positions on the benches of the country’s highest courts to be politicians. That is the ultimate response to Liz Cheney’s tired and hypocritical pieties about the rule of law.

As for her “insurrection,” that of January 6 has to count as the lamest insurrection ever.  The real thing in the United States would require control of the Armed Forces, the media, and much of the vast apparatus of the federal government. That’s what happens in the countries where there is a vulnerability to coups d’état.

But wait – isn’t that exactly what the Democrats pulled off to be in the Whit House now?

At his DC January 6 rally, Trump urged his followers, aggrieved as he and they were at what they all thought, with massive reason, to be a tainted election result, to demonstrate “patriotically and peacefully.” He did not counsel and gave no support nor knew anything about the hooliganism that occurred.

It would have gone nowhere if House Speaker Nancy Pelosi (D-Calif.) or Washington, D.C. Mayor Muriel Bowser had paid any attention to the requests the chief of the Capitol Police made in the preceding days for reinforcements.

It would be gratifying if the same self-elevated custodians of American political virtue had managed any comment at all on the “peaceful protests” of last summer, which killed at least 50 people, wounded more than 2,000 police, and caused billions of dollars in damage. Where was the rule of law then as the police were being defunded by the Democrats?

As emotionalism subsides, the grim facts of the Biden Administration’s incompetence, corruption, and mendacity grow more onerous, degrading, and cringe-worthy, and the soufflé of Trump-hate settles, the absurdity and futility of the anti-Trump Republicans will become unimpeachably clear.

The frustrations of the Trump-haters in both parties now take the form of reproaching Republicans for wanting the former president to campaign for them in the midterm elections next year, and in reproaching the Trump supporters for causing the Republican Party to tear itself apart.

This, too, is nonsense.

Those who want Trump‘s support in the midterm elections only do so because they realize how necessary it is to Republican victory, and the Republican Party is not tearing itself apart at all.

President Trump is conducting himself with commendable restraint. His support is not declining appreciably and will not, especially as the screaming horror of the Biden presidency sinks in on its victim-electors.

Meantime, Republican leadership is taking the position that there are legitimate concerns about the last election but there is no point in debating them further and all Republicans should focus on bringing their party back in the midterm elections and in 2024.

The way forward is this.

Cheney and her followers are neither numerous nor credible enough to tear anything but a marginal corner off the Republican Party as it moves in the direction Trump pointed it: pitching directly to blacks, Hispanics, and working and middle-class Americans.

It is a winning formula on a rising trajectory, and it is not accessible to the McRomBushCheney Republicans as they disappear into the mists of the party’s less successful past.

There is an argument to be made for trying to persuade Trump to confer his benediction on another younger candidate who would thus be much indebted to him, and to do the necessary to make that candidate a unitary Republican figure.

Long before serious consideration needs to be given to the next presidential nominee, however, Trump will flex his muscles in the midterm elections next year. He will demonstrate that he is the only person in the country for whom 50,000 Americans will stand outdoors in raw weather to wait for the chance to see and listen to him.

The bottom line is that none of the other plausible Republican nominees will announce until Trump says that he will not run. If he does not say that, he will probably be renominated and reelected.

That is what drives the NeverTrumpers to these insane acts and utterances: in policy terms, he was very good and it is clear that his opponents wounded but did not kill him. In their mindless hate, they inflicted this terrible regime on the country.

They know this when they avert their eyes looking into the mirror. Their rage now is designed to assuage their guilt. It will not succeed, even in that.