THE FRIGHT OF COMEY 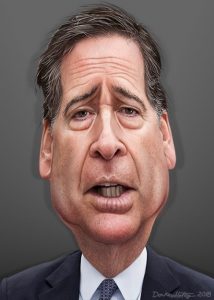 In a recent New York Times  op-ed (5/01), fired FBI Director James Comey was back again preaching to the nation about the dangers of Donald Trump and his capacity to corrupt any top-ranking federal official of lower character than Comey’s own.

Comey seems to have become utterly unhinged by Donald Trump, especially when the president, in his Queens accent, scoffs in the vernacular—quite accurately, given the transgressions of the FBI hierarchy—about “crooked cops.”

What an affront to Comey’s complexity, his subtlety, his sophistication, his feigned Hamlet-like self-doubt—at least as now expressed in his latest incarnation as Twitter’s Kahlil Gibran.

One can say a number of things about the timing of Comey’s latest sermon and his characteristic projection of his own sins on to others.

First, Comey’s unprofessionalism was home-grown and certainly did not need any help from President Trump.

His schizophrenic behavior both as a prosecutor and investigator in the Hillary Clinton email matter was marked by exempting Clinton aides Cheryl Mills and Huma Abedin from indictment, despite their lying to his own federal officials about their knowledge of a private Clinton email server.

Comey wrote his summation of the Clinton email investigation before he had even interviewed the former secretary of state.

He was hardly independent from a recused Attorney General Loretta Lynch in the Clinton email investigation. As her rubbery courier he bent to her directives on all key decisions that led to de facto exoneration of likely next president Hillary Clinton.

Second, Attorney General William Barr is soon to receive a number of criminal referrals from Congress, inspectors general, and perhaps other prosecutors. He won’t allow collusion hysteria to cause him to recuse himself in the manner in which Jeff Sessions sidelined himself and elevated Rod Rosenstein.

In anticipation of that bleak reality, Comey seems to be prepping his own defense by a transparent preemptive attack on the very official who may soon calibrate Comey’s own legal exposure.

Comey should at least offer a disclaimer that the federal prosecutor he is now attacking may soon be adjudicating his own future—if for no other reason than to prevent a naïf from assuming that Comey’s gambit of attacking Barr is deliberately designed to suggest later on that prosecutor Barr harbored a prejudicial dislike of likely defendant Comey.

How ironic that Comey, who used to lecture the nation on “obstruction” and the impropriety of Trump’s editorializing about the Mueller prosecutorial team, is now attacking—or perhaps “obstructing”—the Attorney General before he has even issued a single indictment.

Three, Comey somehow remains seriously delusional about the abyss between his sermonizing and his own unethical and likely illegal behavior.

Remember, James Comey assured the nation that the Steele dossier, contra the testimony of his subordinate Andrew McCabe (already facing criminal referrals) was not the chief evidence presented to a FISA court.

That is likely untrue. And if it is not, Comey’s other evidence he presented is likely to be just as compromised.

Comey also misled a FISA judge by not admitting:

1) that his submitted dossier evidence was compiled by a contractor paid by Hillary Clinton;

3) that Steele’s relationship with Comey’s FBI has already been severed due to Steele’s unprofessional behavior;

and 4) that submitted news accounts of “collusion” were in circular fashion based on the dossier itself.

Had Comey’s behavior ever become standard procedure in FISA applications, there could be no longer a FISA court.

Comey also misled about his meetings with President Trump, as memorialized in his now infamous memos. He briefed the president on the Steele dossier—without telling Trump that it had been paid for by Hillary Clinton.

Comey likely also lied in telling Trump he wanted to brief him on the dossier in worries that the press might otherwise report on it first.

In fact, his meeting with Trump by design was the necessary imprimatur the press had been waiting for to leak information from the dossier, which shortly followed.

Comey likely misled the president into thinking both that he was not under investigation by the FBI and that the FBI hierarchy did not leak confidential information to the press.

In fact, neither assertion was true; both his deputy Andrew McCabe and Comey himself were chronic leakers. Comey swore under oath that he had never authorized anyone in the FBI to leak to the press, while his deputy McCabe swore in contrast that Comey was well aware that his subordinates were talking freely with the press in order to leak information selectively.

When he was no longer a U.S. government employee, Comey illegally took personal possession of at least seven confidential memos of presidential conversations, written on FBI time and equipment and thus still government property.

He leaked at least three memos that were likely classified, apparently to seed his narratives to the media and to prompt the appointment of a special prosecutor as payback for his own firing.

That trick worked out well, since his friend Robert Mueller was soon appointed special counsel amid the general Russian “collusion” hysteria that Comey himself had long ago helped ignite. If any lower echelon employee had leaked in a similar manner to Comey, he would face an array of felony indictments.

Comey, remember, on more than 240 occasions reportedly claimed under oath he could not remember or did not know the answers to questions from Congressional inquirers. If a private citizen tried that with the IRS, he world likely face perjury charges.

Comey has never adequately explained his role in inserting FBI informants into a presidential campaign, and the degree to which his decision might have been taken in conjunction with other intelligence agencies or with the knowledge of the then-attorney general or President Obama.

The New York Times of all publications is apparently investigating the use of FBI informants to sandbag the Trump campaign—during Comey’s directorship.

To my knowledge, no previous FBI director—perhaps not even J. Edgar Hoover—had unilaterally placed FBI informants into a presidential campaign during the general election.

One way of looking at John Brennan’s and James Clapper’s nonstop cable news announcements of Trump’s “treason,” the Comey-McCabe whirlwind book tours and television confessionals, the Adam Schiff furrowed-brow predictions of huge bombshells soon to go off, and the general progressive media hysteria over the last two years or so is to appreciate a transparent effort at preemptive defense.

That is, Russian “collusion” and its bastard child “obstruction,” sought to divert attention from massive Obama Administration efforts at the CIA, FBI, Justice Department, and National Security Council to use the powers of government to first ensure that Trump was not elected and then, failing that, to distort and ruin his transition and presidency.

The effort initially was so easily green-lightened, because none of these Washington fixtures had any idea of the nature of the “smelly” Walmart folks or the supposedly toothless sorts who live apart from the two coasts, and thus they bet on the wrong horse—convinced that Hillary Clinton was a sure landslide winner, and their own skullduggery would be rewarded as loyalty in extremis by someone who trumped them all in skullduggery. 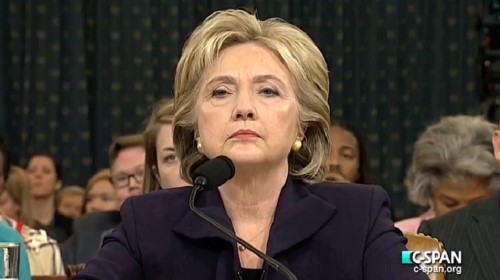 When Clinton crashed and burned, phase two of the now “resistance” was comprehensive stonewalling.

The culpable adopted a preventative defense by accusing the very victim of their prior assault of being a disloyal, unpatriotic victimizer of American institutions—no doubt in their mind leading to Trump’s emasculation or impeachment and thus their own exoneration.

For a while, they got away with all that and more as:

*Representative Devin Nunes (R-CA) was for a time sandbagged off the investigation of Russian collusion at the House Intelligence Committee;

*Sessions’ conflicted deputy Rod Rosenstein took over the investigation and may have trafficked in Andrew McCabe’s melodramatic but ultimately ridiculous coup efforts;

*The media, in insult to injury fashion, put on television many of the very principals who had acted so unethically and illegally to contextualize and analyze their own crimes.

The only remaining mystery of this entire sordid mess is how the rotten onion will be peeled away.

When indictments come down, will the likes of Fusion GPS co-founder Glenn Simpson or James Baker or Bruce and Nellie Ohr be leveraged to inform on the likes of the Brennan, Clapper, Comey, and McCabe high stratum?

And will that in turn will provide clarity about still higher officials to learn what Barack Obama, Joe Biden, Loretta Lynch, Susan Rice, Samantha Power, and Sally Yates knew and when they knew it?

In the meantime, expect James Comey to continue his frenetic pace on TV, radio, and in op-eds attacking William Barr and Donald Trump in deathly fear that his illegal behavior may finally have a legal accounting.