2 The Point News » Guest Authors » Members Only » THE FOUR HORSEMEN OF OUR APOCALYPSE: SOROS, XI, GATES, AND BIDEN

THE FOUR HORSEMEN OF OUR APOCALYPSE: SOROS, XI, GATES, AND BIDEN 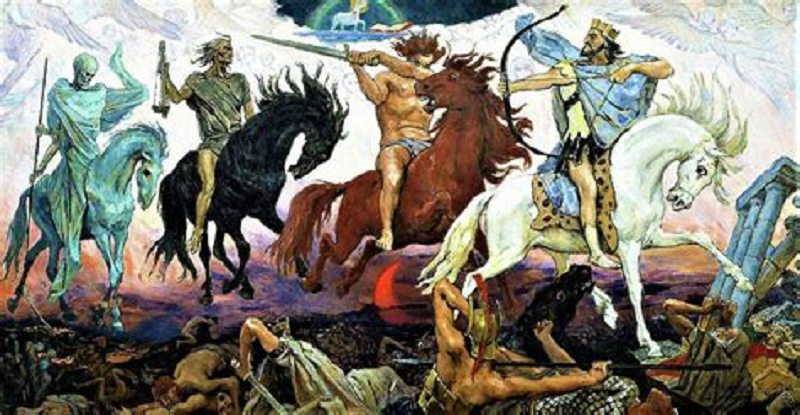 The New Testament’s Book of Revelation has long puzzled and inspired biblical scholars as to the meaning of the Four Horsemen of the Apocalypse.  Most agree that they represent four catastrophes that will befall humanity during the “end times.”

The White Horse’s rider carries a bow and wears a crown.  He is generally thought to symbolize Conquest.  Fast-forward to today, and consider the work of George Soros.

For decades, he has spent countless millions of his billions on his quest to destroy the United States and other nations.  He recruits and funds Antifa and BLM, supplies their riot gear and weapons, pays for their transportation and accommodations where necessary.

He funds the political campaigns of pro-criminal anti-victim district attorneys like Chesa Boudin in San Francisco and Kim Gardner in St. Louis.  Crime is skyrocketing in each city where a Soros-funded D.A. holds office.  These anti-American radicals engender violence and chaos and renounce law and order.  They have defunded the police.

Along with the rest of the Left and the founders of BLM, Soros is committed to undermining all traditional American values and to promoting anything in opposition to those values.  Like the rider of the White Horse, he has succeeded wildly over the past twenty years.

The Red Horse is, appropriately, the general secretary of China, Xi Jinping, leader of the Chinese Communist Party.  The Red Horse is said to represent War, with its bloodshed, murder, and revolution.  And indeed, Xi has declared war upon America and the entire world by unleashing his military-manufactured China Virus upon us all.

Aside from his horrific crimes against humanity, Xi began co-opting the Biden family when Joe was V.P.  The Biden family is inextricably linked with the CCP; China has the goods on the Bidens that could expose their greed and grift for all to see.    How many millions has Xi pumped into our universities, media, entertainment, sports, and mainstream press to see his preferred narratives spread throughout the land?  Incalculable.

Bill Gates and his acolytes like Anthony Fauci could very well be riders of the Black Horse.  The rider of the third horse holds a pair of scales.  In the Bible, black is often connected with Famine and food shortages.  Gates now owns more American farmland than any other corporation or entity — 242,000 acres worth $690M.  Would he like to employ Marxist agricultural policies like those Stalin implemented, policies that create famine?  Between 4 and 7 million people were starved to death in the Holodomor.  But Gates is also the man who wants us to eat fake meat and bugs.

Gates has long encouraged a reduction of population and is a vaccine enthusiast.  His oral polio vaccine spread polio across Africa.  He is the self-appointed vaccine czar, a “Vaccine Monster,” a defender of “monopoly medicine” according to The New Republic.

Sixty-seven percent of Americans are said to have been vaccinated by now, jabbed with an experimental form of gene therapy.  There have been thousands of vaccine deaths and injuries, and no one knows what the long-term effects may be over time.  Here is an excellent short video that explains the risks.

Between Gates’s known drive for depopulation and his enormous influence over the COVID vaccines, he may well symbolize famine and death.  The money he stands to make is of course incidental.

The rider of the last horse, the Pale Horse, is Death, and “Hades followed with him.”  Certainly, everyone not wearing ideological blinders knows by now that Joe Biden is non compos mentis.

He is not of sound mind.  He can barely read his teleprompter and needs note cards to answer the simplest of questions.  He often suffers brain freeze and appears to be lost, even frightened. So Biden represents Death in two ways; his own mental and physical deterioration and the death of America.

In the five months he has held office, his administration, whoever is calling the shots, has instigated the wholesale invasion, à la Camp of the Saints, that is occurring over our southern border.

The proposed and already approved irresponsible spending has kick-started inflation that will inevitably continue to rise.  Gas prices are sky-high, thanks to the shuttering of the Keystone pipeline, while Biden handed Russia the Nord Stream pipeline Trump had sanctioned.

Biden and his minders have prioritized the demands of the LGBT, Antifa, and BLM activists and embraced the toxic, racist-to-its-core Critical Race Theory to further pit people against one another.  He and they set out to undo every policy President Trump put in place that had so benefited the American people.

The Trump-fearing Left, aided by establishment RINOs, engineered a fraudulent election and used COVID to force an entire population into isolation.  The lockdowns destroyed hundreds of thousands of small businesses while allowing their corporate pals to remain open.  Now they want to mandate vaccines even for people who choose not to submit to them for very rational reasons.

The odious Fauci is angry at those people.  “Get over it.  Get over this political statement.  Save yourselves and your family.”  He seems to believe that those who resist an experimental jab are doing so for political reasons when in fact, right or wrong, they have made their decision precisely to save themselves and their families.

The Soros/Xi/Gates/Biden horsemen are despicable people, tyrants, united in their cause, determined to sabotage what the Founders created, including the Constitution.

Is there a cultural realignment, a patriots’ rebellion, a second American Revolution afoot?  There is evidence all around us.

Parents are fighting back against the racist absurdities of CRT and the demands of the LGBT crowd.  Steve Bannon’s War Room has over sixty million listeners.  The truth of BLM is leaking out as well.  Its leaders, avowed Marxists, are as acquisitive as any other faux civil rights organization.

“The people made worse off by slavery were those who were enslaved. Their descendants would have been worse off today if born in Africa instead of America. Put differently, the terrible fate of their ancestors benefitted them.”

People are waking up to the damage done to this country by the wrecking crew that is the Biden administration.  What this cabal is doing is by design despite Kamala Harris’ obvious incompetence and Biden’s dementia.  Will and Ariel Durant wrote:

“Civilization is not inherited; it has to be learned and earned by each generation anew; if the transmission should be interrupted for one century, civilization would die, and we should be savages again.”

We are seeing savagery now on the streets of some of our cities.  It has to stop.  Our four horsemen must be relegated to the visions of the Apostle John and defeated by an energized America.