THE FEDS NEED TO KNOCK ON JOHN BRENNAN’S DOOR 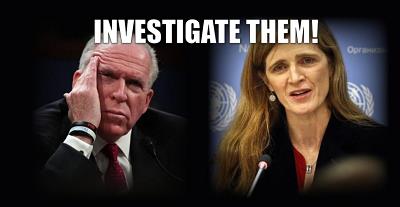 Both of these tweets raise enormous questions, not only about what is meant by these threats, but what kind of inside information these former Obama officials might be receiving from unauthorized sources.

Late Friday night (3/16), after the long overdue firing of Andrew McCabe, the disgraced former acting FBI director, the president tweeted to the American people that McCabe’s termination (and possible loss of pension) marks a “great day for the hard working men and women of the FBI – A great day for Democracy.”

Trump added that “James Comey … made McCabe look like a choirboy. He knew all about the lies and corruption going on at the highest levels of the FBI!”

Trump’s criticism of Comey is not speculation. We now know that Comey leaked internal memos about his alleged conversations with Trump to the media through a surrogate, an act that many believe violated FBI rules, possibly even rules surrounding classified information.

Moreover, Comey’s greasy fingerprints appear to be all over the discredited Russian dossier and the FISA warrants obtained using the dossier to spy on surrogates of the Trump campaign.

For his part, though, and in keeping with his reputation as a man with a high opinion of himself, Comey responded with a rather anodyne  tweet that was equal parts self-love and salesmanship (his book comes out next month): “Mr. President, the American people will hear my story very soon. And they can judge for themselves who is honorable and who is not.”

“When the full extent of your venality, moral turpitude, and political corruption becomes known, you will take your rightful place as a disgraced demagogue in the dustbin of history,” Brennan blasted to Trump on Twitter. “You may scapegoat Andy McCabe, but you will not destroy America…America will triumph over you.”

The question now is what does Brennan know? And where did he get the information that allows him to confidently threaten a sitting president with “disgrace” and a place “in the dustbin of history?”

Brennan’s tweet took on an even more ominous tone after Power later tag-teamed it with this tweet: “Not a good idea to piss off John Brennan,” she warned, with a link to Brennan’s tweet threatening Trump.

Again, Brennan is the former head of the CIA, a man with incalculable residual power through various contacts, not just within the bureaucratic Deep State, but within the wide world of international spycraft.

Power, who is at the center of an ongoing investigation looking into the unprecedented unmasking of American citizens (that possibly included Trump campaign surrogates), obviously believes that Brennan being “pissed off” at Trump means things will now happen, that Trump will pay a price, that Brennan will come out on top.

This is all very ominous, unquestionably a threat, and also makes one wonder if Brennan and Power are receiving unauthorized information, possibly from Robert Mueller’s special counsel office. Even the mainstream media, firmly in Mueller’s corner in their desire to destroy Trump, have repeatedly reported things that could only have come via leaks from the special counsel’s office.

The very idea that a Brennan and Power, two former Cabinet-level officials in the Obama administration, are publicly hurling not-so-veiled threats at a sitting American president, is not only beyond the pale, but must be taken seriously by Federal authorities.

It is important to remember that this is not the first time Trump has been threatened with Deep State reprisal. In January of last year,  Senate Minority Leader Chuck Schumer, (D-NY) seemed to gloat over the fact that the intelligence community has “six ways from Sunday at getting back at you” — meaning Trump.

In February, Phil Mudd, a CNN counter-terrorism analyst, publicly warned Trump that the F.B.I would seek revenge against Trump and “win.”

This is the rhetoric of a state run by an un-elected secret police force, not a representative democracy where the intelligence community is supposed to answer to the people through our elected representatives.

Only a new special counsel can look into these threats. The Secret Service might also want to get itself involved.  A knock by them on Mr. Brennan’s and Ms. Power’s doors certainly would be appropriate.  Impaneling a grand jury to indict them even better.

John Nolte was Breitbart’s first editor-in-chief and is now their senior editor.