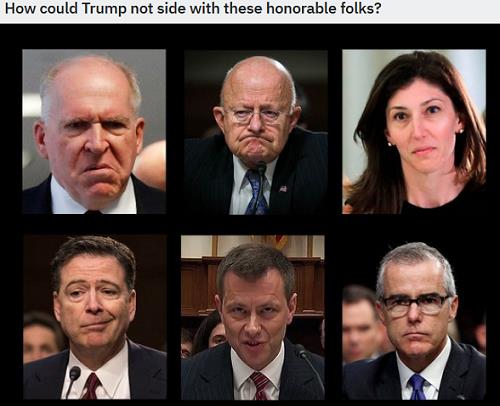 And Rat Rosenstein, Songbird, Dem Traitorcrats, the GOPe, the Enemedia, and the entire Deep State?

Just when you think there’s no possible way these morally diseased folks could become crazier than they are already, they dig themselves even deeper into the depths of dementia.

I won’t bore you with repeating their lunatic tweets and public statements over what a traitor Trump is for refusing the bait in the trap they set for him last Friday the 13th.

The ludicrousness  of the trap is brilliantly explained by Andy McCarthy: Mueller’s Politicized Indictment of Twelve Russian Intelligence Officers.

“Make no mistake: This is nakedly politicized law enforcement. There is absolutely no chance any of the Russian officials charged will ever see the inside of an American courtroom. The indictment is a strictly political document by which the special counsel seeks to justify the existence of his superfluous investigation.”

Then Andy spotted the real bombshell of Rosenstein’s announcement of Mueller’s phony indictments:

“The Justice Department, Rosenstein explained, will now ‘transition responsibility for this case to our Department’s National Security Division while we await the apprehension of the defendants.’

Now, stop giggling over that last part — the bit where we hold our breath until Russian dictator Vladimir Putin extradites his spies into the FBI’s waiting arms. I’m talking about the first part: Mueller’s case, the definitive case about what Russia did to interfere in the 2016 election, is no longer Mueller’s case. It is being ‘transitioned’ — i.e., buried — in the Justice Department unit that deals with counterintelligence matters that do not result in public trials.”

Rosenstein admitted that Mueller has no case at all against Trump or his people “colluding” with Russians.  The whole Friday the 13th Rosenstein show was a complete charade – with only one purpose.  That’s clear from it being announced 72 hours before Trump’s Summit with Putin.

It was to ruin the summit by forcing Trump to condemn to Putin’s face the election “meddling” the indictments claimed and thus implicitly support the claim that he colluded in it.

To the fully berserk rage of the Left – and even a number of Trump supporters who just don’t see what’s going on – Trump blew the trap up.  “Treason!” they shout – “it’s treason to take Putin’s side against America’s intelligence community!”

Note how Trump refutes this nonsense:

His intel people – not Obama’s like Brennan, Clapper, Comey who claim all the intel on the “meddling” –

Then with this key question:

For as the HFR last Friday noted:

“The entire indictment (full pdf ) is based on the premise of the FBI conducting some unexplained and unsubstantiated form of forensic data-analysis to formulate their detailed conclusions.

However, can anyone explain how this FBI forensic data-analysis was possible when the FBI was never allowed access to the DCCC, DNC and Clinton Campaign servers?”

Which means the entire Evil Farce of Hate Trumpers is just that.  It’s common knowledge that the clock rate for downloading Podesta’s emails – the crux of all this – was far faster than possible by a remote hacker, Russian or otherwise.  It was an inside job, which everyone suspects was Seth Rich, angry at how the DNC rigged the primaries for Hillary and screwed his guy Bernie.

After Seth gave Podesta’s emails to Wikileaks, Podesta had him murdered, so goes knowledgeable suspicion, then invents the Trump-Russian Collusion myth with the dossier as a diversion.  Can hardly wait until POTUS springs the trap back upon the real colluders.

Sure he does – just not those who ran them under his predecessor.

When will the Evil Farce come to an end?  When Trump decides the perpetrators have given themselves enough rope to hang themselves.

The real question is will he decide to drop the gallows’ trapdoor before or after the November election.  For that, we’ll just have to wait and see.  Hope you can stand the drama.  Meanwhile…