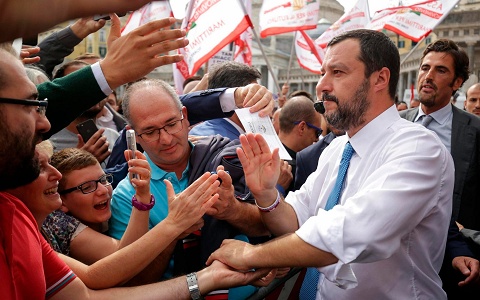 Do not assume that Italy’s insurgent coalition will capitulate to EU demands if risk spreads on Italian debt blow through the fatal line of 400 basis points.

The European Commission’s strategy of ‘controlled escalation’ relies on tacit collusion with bond vigilantes and hedge funds to ratchet up the pressure. The method is to squeeze the capital buffers of Italian banks and ultimately to set off a deposit run, hoping that such financial vandalism does not set off contagion to Portugal, Spain, and Greece.

This is a dangerous game to play unless you can be sure that the Lega-Five Star alliance will back down rather than resort to radical measures in self-defence. The obvious risk is that Italy’s budget fight with Brussels will cause a pan-European financial crisis before either side blinks.

“Brussels can keep sending its silly letters until Christmas. Our budget is not going to change. The gentlemen speculators will just have to get used to it, because we will not retreat,” says Lega strongman, Matteo Salvini, relishing a political knife-fight with the EU all the way to the European elections next May.

Giancarlo Giorgetti, the Lega elder statesman and Italy’s ‘shadow’ premier, stated on Tuesday night (10/23) that if the spreads rise to 400 – from the current ‘amber’ zone of 322  – it will erode the balance sheets of the banks and force government intervention.

“Recapitalization will be needed. We will have to act quickly,” he said.  This was interpreted by the EU and by many in the markets to mean that Italy is nervous and will rescind its fiscal plans if pushed hard enough.

Lega sources tell me the exact opposite: that the coalition will not stand idly by if the EU tries to engineer a credit squeeze that slowly asphyxiates the real economy.  “We’re no longer supine and submissive when it comes to Europe,” said Mr Giorgetti.

They will take a leaf from the US Treasury’s 2008 ‘TARP’ program, which involved buying $105bn of preferred stock in eight Americans banks. This was painful for bank shareholders but it greatly reduced the intensity of the credit crunch for borrowers and business.

Above all, the Lega and the Five Star ‘Grillini’ have learned the lesson of Greece: that the eurozone’s enforcement tool is to dial down liquidity for the banking system until the ATM machines run out of money. Once you go down that path you are doomed. Brussels will run the clock on you.

My guess is that if the coalition reaches the point of a home-grown ‘TARP’ for the banks in defiance of the EU’s banking rules, it is a natural progression for them to activate their  ‘minibot’ scheme for a parallel currency when needed.

This is a form of scrip to pay state contractors and household rebates, useable for tax purposes. It is what California did in 2008 to inject liquidity, with the crucial difference that the minibot is also designed to be self-defense instrument and a lira in waiting.

Brussels is right that Italy’s calculated defiance is a fundamental challenge to the budgetary structure of monetary union, “a particularly serious non-compliance”.

France and Spain breached the revamped Stability Pact with mellifluous promises for year after year – as did previous Italian governments – but they did not contest the authority of the EU itself.

This clash is elemental. Failure to act would undermine German and Dutch political consent for the euro, and create a different kind of crisis. Given the current structure of the EU it had to reject the Lega-Five Star budget and set in motion its full punitive machinery for the first time, even if a budget deviation of 1.4% of GDP is neither here nor there in macro-economic terms.

Yet Italy is right that the Stability Pact and the Fiscal Compact are an absurdity with no foundation in economic science, and have a contractionary bias that leaves high-debt legacy states in a deflationary cul de sac.

The rules are an unworkable attempt by lawyers to overcome the original sin of binding incompatible economies together in a single currency half a century too soon and then allowing a massive North-South chasm in real exchange rates to build up for fifteen years.

And no, the fact that Spain or Portugal may have clawed back some ground with real wage cuts and an internal devaluation does not correct the deeper misalignment. This will become obvious again in the next global downturn.

The Lega-Grillini are right to put an end to this ideological make-believe and to demolish the self-serving German narrative of how monetary union should be run.

They are right to present the EU with an ultimatum: either accept the imperative of fiscal union and shared debt – with a genuine central bank acting as a lender-of-last resort, rather than as a political enforcer – or risk euro rupture.

“We are the last defense of the social rights of the Italian people. We know that if we surrender, we’d quickly see the return of the pro-bank and pro-austerity ‘experts’. So we will not surrender,” says Five Star leader Luigi di Maio.

The EU will now raise the heat with moves towards the ‘excessive deficit procedure’. This could culminate in a fine of 0.2% of Italian GDP, and a cut in EU structural funds. Should Brussels ever dare to do this, Mr. Salvini would retaliate by withholding Italian payments into the EU budget. Unlike Greece, Italy is a net contributor.

Brussels calculates that economic fear will erode the poll ratings of the Lega and Grillini as the spreads rise, strengthening the hand of the pro-EU ‘poteri forti’ in the Italian establishment. Family wealth managers CFO Sim in Milan said it is dealing with a wave of requests from Italians with €200,000 or €300,000 in liquid savings asking for advice in how to set up accounts in Switzerland. They fear the Greek treatment.

You can see the contours of a blow-up as the European Central Bank prepares to halt its QE bond purchase at the end of the year. Italy must roll over or fund €400bn of bonds in 2019 with no automatic back-stop buyer for its debt.

Italian banks are already shut out of the European funding markets and cannot raise fresh capital at viable cost. The old ‘doom-loop’ of sovereigns and banks dragging each other down is again on stark display.

Monte dei Paschi di Sienna and Genoa’s Carige will both need to raise capital if spreads hit 400. Their share prices fell to record lows on Wednesday (10/24). Others will succumb at 500. Almost the entire banking system would have to be recapitalized at 600.

Societe Generale says every 100 point rise in spreads cuts the core CET1 capital ratios of the banks by 21-26 points. Insurers are being drawn into the maelstrom. Generali owns €60bn of Italian state bonds, equal to 2.5 times its equity.

Yet for the Italian people as a whole, the spreads have lost their psychological power in the years since the ECB used the bond markets to topple premier Silvio Berlusconi in 2011. That episode has been vividly described by former ECB governor Athanasios Orphanides.

“They threaten governments that misbehave with financial destruction. They cut off refinancing and threaten to kill the banking system. They create a roll-over crisis in the bond market. This what happened to Italy in 2011,” he said.

Italians put up with the ‘coup d’etat’ at the time believing that the experiment of an EU commissar imposed by Brussels would at least pull Italy out of economic recession. Instead austerity overkill made matters worse. It caused the debt ratio to rise even faster through the denominator effect. “Nobody is fooled by the spreads anymore,” said Claudio Borghi, the Lega’s economics chief.

This time the Lega and Grillini have been warning from the rooftops well in advance that the spreads would be used to try to break the new government. The public is partially inoculated. It will therefore take a high dosage of spread warfare to achieve effect.

Investors must assume that this Brussels-Rome brinkmanship will go on for months, and the stakes are huge. Italy’s sovereign debt is €2.3 trillion. The exposure of French banks alone amounts to 11pc of France’s GDP. The Bank of Italy ‘owes’ a further €492bn via the ECB’s Target2 payment system which converts into Lira under Lex Monetae in a euro break-up.

As Mr. Borghi told me earlier this month, the EU managed to turn a minor problem in Greece into an epic disaster by their own mismanagement. If they repeat the mistake in Italy, it will be “a thousand times worse”.

My question to Europe’s leaders is what will happen to the EU Project if their determination to press on with the same rigid status quo leads to a hard Italian default and a hard Brexit at the same. Would any of it survive a twin financial shock of such magnitude?

The answer is No – and likely so with just the former alone.  Which is why in the war of Brussels vs. Rome, we should be rooting for the Italians.