THE DOOM OF NEW YORK CITY 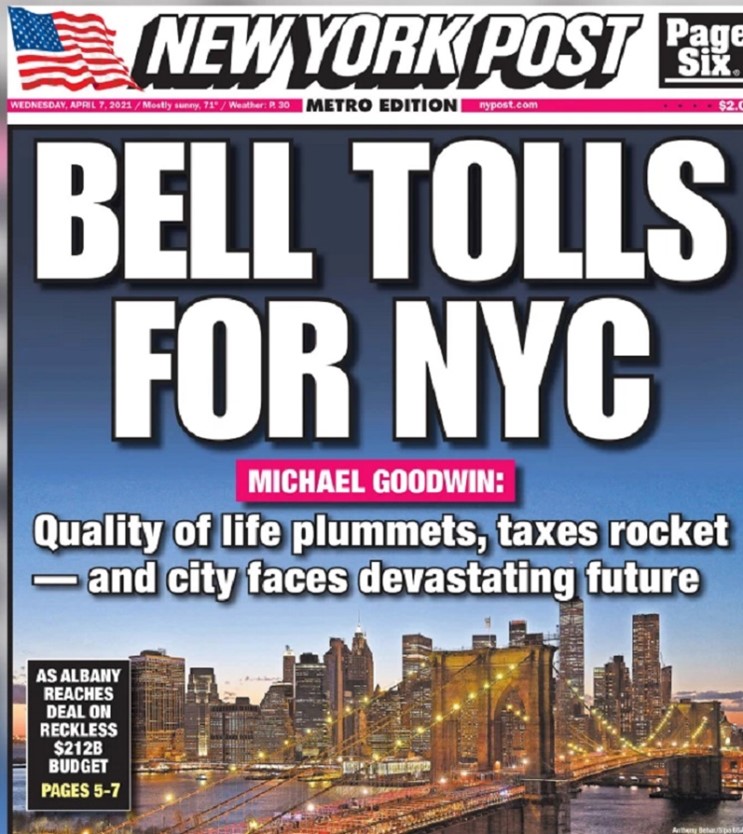 “No man’s life, liberty or property are safe while the Legislature is in session.”

That’s how Gideon Tucker — a New Yorker who knew Albany as a former legislator, secretary of state and judge — put it back in 1866.

His wisdom, as demonstrated repeatedly over the ages, is timeless.

Yet there is something different, and especially troubling, about this time. The possibility of permanent decline and the ultimate destruction of the New York we know is unmatched in modern memory.

With Republicans reduced to hecklers, Albany Democrats, oblivious or reckless or both, are marching toward the cliff in an Alfred E. Neuman, “What, me worry?” way. The rising chorus of “Stop!” goes unheeded.

Washington is sending trainloads of money to blue states to bail out their high-tax, high-spend habits. As longtime government guru Dick Ravitch writes in a Wall Street Journal op-ed, “Congress has been generous, allocating more than $12 billion to New York state, $6 billion to the city, $6 billion to the Metropolitan Transportation Authority, and $9 billion to the state’s schools.” $33 billion in all to go straight down the drain.

The state’s take raises the total budget about to be adopted to $212 billion, some $18 billion higher than the fiscal year that just ended. Florida, which has 2 million more people, will make do with spending $97 billion this year.

Ah, but in Albany, it’s never enough. Not as long as the Legislature is in session.

Despite the bailout, and the December pandemic stimulus, and the ones before that, Gov. Andrew Cuomo and lawmakers are launching $4 billion of new tax hikes. Apparently being the highest-taxed state by most measurements doesn’t satisfy them.

They want to be No. 1 across the board.

Naturally, they say only corporations and the really rich will be hit, but don’t believe them. Tax hikes trickle down in that they tend to reduce the economic activity of those who pay them, a decline that eventually hits everyone.

Having the government redistribute more taxpayer money is, at this historic juncture, a terrible idea.

Tax hikes will kill more businesses and cause others to look for more hospitable turf. Wags already have dubbed Cuomo and Mayor Bill de Blasio the “employees of the month — in Florida.”

Besides, even if it were true that only the rich will get hit, raising taxes sends the wrong message in a state where so many people and businesses already have left or are thinking about it.

What business would want to come here now? Why should existing ones continue to pay more and more for dangerous and dirty streets and arbitrary pandemic shutdowns?

The answer for many is no, no, hell no, and they have given up on New York. The proof is in the sagging real estate market and the empty storefronts in even the best locations.

Not all of those leaving are rich, but they’re all afraid, and not just of the inevitable cost-of-living increases that follow as the taxes ripple through housing, services, transportation and every bottle of beer and bag of potato chips sold.

Many are also understandably afraid of crime and public disorder. A snapshot of NYPD stats over two years paints an unmistakable picture of a city in serious decline.

Murder climbed nearly 45 percent last year and is up an additional 13.5 percent this year. The increases translate into an additional 153 New Yorkers shot, stabbed and strangled.

Shootings are up 72 percent in two years, and car thefts are up a staggering 91 percent. The city is in a death spiral, with unprovoked attacks and subway pushings adding more reason for rational fear.

Also, let’s give money — $2.1 billion, to be exact — to illegal aliens by creating an “excluded workers’ fund.”

Coupled with sanctuary status, the big progressive handout will be heard all the way to Central America. If only such compassion extended to taxpayers.

Against that backdrop, there is zero surprise in the bulletin of bad news released by Comptroller Tom DiNapoli. He reported Tuesday (4/06) that of the nearly 2 million jobs the state lost during the pandemic, less than half have been recovered, meaning a million fewer people are working than a year ago.

New Yorkers would be lucky if Albany had its version of the Hippocratic oath requiring rulers to at least do no harm. Instead, in a bid to raise ever more money to spend, the state is authorizing recreational use of marijuana and allowing online sports betting.

Combined with the decriminalization of most quality-of-life offenses, including street prostitution, Albany is hellbent on heaping more degrading experiences on those hardy souls who don’t or can’t leave. All because it can’t control its spending.

There is another lesson in Albany’s actions, and this one pertains to Cuomo.

Beset by outrageous scandals that pile up by the day and his survival dependent on two investigations, a pitch to his supporters is that he is an indispensable brake on the tax-and-spend, criminal coddling instincts of Dems controlling the Legislature. “Apres moi, le deluge”: After me, the flood.

That might have been true once, but no longer. Cuomo abandoned the centrist-leaning ideas he once held, on taxes, spending, charter schools and criminal justice.

He doesn’t talk in “woke” terms, but his policies are almost indistinguishable from those who do. His claim to be a stabilizing force politically is as valid as his claims to be a guardian of the elderly and women’s rights.

So to Gideon Tucker’s warning about life, liberty and property not being safe while the Legislature is in session, we add Cuomo’s destructive presence as another reason for New Yorkers to be extra fearful this time.