THE DNA SOLUTION TO THE EQUALITY ACT 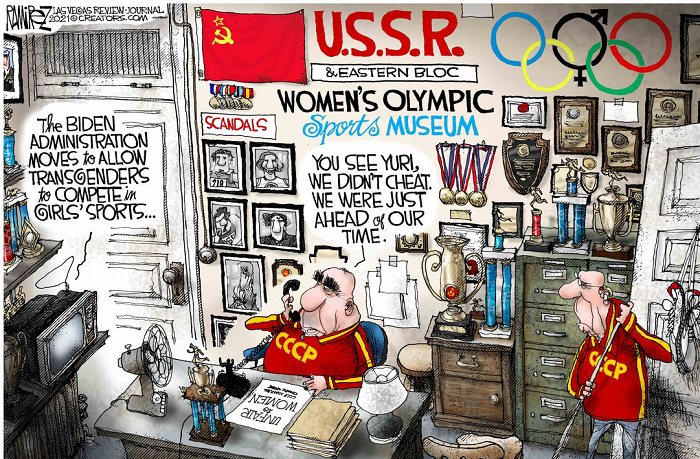 Abraham Lincoln was fond of asking a question of people to test their intelligence:  “If you call a dog’s tail a leg, how many legs does the dog have?”  If a person answered, “Five,” Lincoln knew he was talking with someone not very smart.  “No,” he’d reply, “the correct answer is Four, because calling a tail a leg doesn’t make it a leg.”

We need, then, a solution to the Feds forcing Fake Reality upon us at the point of a government gun.  Here it is.  Feel fully free to send it to any coach, athletic department, school administrator, city council member, state legislator, or member of Congress you may know.

For example, the Equality Act would make it a violation of federal law to prevent a biological male who “self-identifies” (i.e., pretends) his gender as female from participating in a women’s sports event.

The solution is to, first, abolish the categories of women-only and male-only in sporting events.  There would no longer be a gender-based event to “self-identify” at.  There would not be a distinction to sexually “orient” towards.

The same applies to the Equality Act requiring sexual orientation/gender identity education K-12.  Switching the topic to DNA-XX/XY education obviates the requirement – with the added benefit of imparting real knowledge to the child instead of sheer propaganda.

The Equality Act makes all single-sex public facilities like bathrooms, or women’s school gym showers, illegal.  Again, abolish the male-female sexual/gender distinction in such facilities, replace them with the XX-XY genetic distinction.  This is easily enforced in a school which can determine a student’s – or a teacher’s – DNA in advance.

Not so much in a public restroom, admittedly, but creative minds should be able to invent a technological fix.

Under the Equality Act, doctors may be required to perform sex-change surgery or prescribe hormones for “gender affirmation.”  Such surgical or hormonal interventions are cosmetic only, like a man wearing lipstick or a woman’s dress. They in no way change the person’s fundamental biology.

Bruce Jenner or Richard Levine, for example, may grow long hair, wear makeup and dresses, pitch their voices higher, have breast augmentation, have themselves surgically castrated, and call themselves Caitlyn or Rachel – but there’s no way to change their DNA.  They were born with a XY chromosome and will die with it – they will never be XX, i.e., genetically a woman.

Now if adults want cosmetic surgery, that’s their business – as long as they pay for it with their own money to a doctor willing to perform it.  But if the Equality Act forces doctors to perform sex-change surgery or prescribe hormonal therapy against a doctor’s will, and/or at taxpayers’ expense, then any state or community can require that such procedures or therapy must be non-cosmetic but genuine.

That is, it must be to switch the person’s XY chromosomes to XX or vice versa.  Since this is beyond current medical technology for the foreseeable future, the problem again is solved.

To this must be added the qualifier of informed consent.  It is legally required in the doctor-patient relationship before any procedure or therapy for adults.  Yet this cannot be achieved with any prospective patient too young to sign a legal contract, with or without parental agreement or knowledge, most especially if the contract had long-term consequences.

Thus states and communities are fully within their prerogatives to ban any sex-change surgery or hormonal therapy for anyone under legal age of consent – in the same way many states have a minimum age of consent for tatoos, which have far less serious long-lasting consequences and are far easier to reverse than surgical/hormonal sex changes.

These are primary examples of a DNA Solution to the Equality Act.  Creative minds conversant with medicine and biology will be able to think of others.

And what of those rare individuals, XX Males and XY Females?  Such genetic flaws are so rare, as much as 1 out of 100,000 people, they do not impact the solution proposed here.

The DNA Solution may be enacted by coaches, athletic departments, school boards, city councils, county executives, and state agencies and governments.  In this way, the destructive impact of the Equality Act or anything like it nationally to municipally, may be neutered, to use the appropriate metaphor.

And why wait for the Equality Act to be passed?

The DNA Solution may be put in place now by any athletic department or sports organization under pressure to allow “transgender” men to compete against women rather than other men.  Substituting XX and XY biological identity for “male/men’s” and “female/women’s” categories in athletic competitions enables dismissal of the pressure.