THE DISASTER OF BOEING’S CORRUPTION IS AN OPPORTUNITY FOR TRUMP 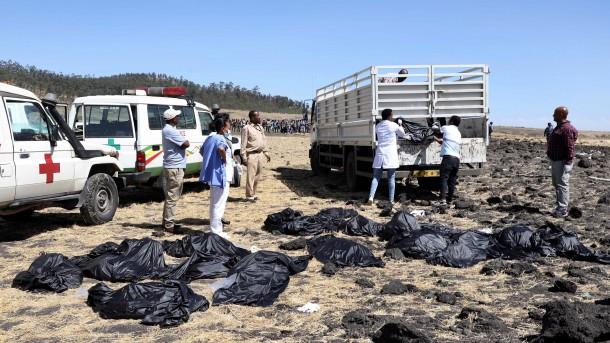 Victims of Boeing crash in Ethiopia collected in body bags

I didn’t say that Boeing is arrogant. I said they have their noses in the air.  Jokes aside, l’Affaire Boeing is a watershed.

President Trump is under pressure to circle the wagons around one of America’s flagship industrial companies, among other reasons because China will exploit the crisis to promote its new entry into the civil aircraft market.

He made a good start yesterday (3/13) by grounding the Boeing 737 Max aircraft in US airspace, after the horrific Ethiopian Airlines crash Sunday (3/10) that killed 157.

To follow up, he should ignore the legions of industry lobbyists and their Hallelujah chorus at the Pentagon, and take the opportunity to clean out the swamp in America’s military industry.

By now the whole world knows what pilots and aerospace engineers have known all along: Boeing stuck big modern engines on a 1950s airframe design, which made the 737 Max inherently unstable, with a tendency to go nose up and stall. It used a software kluge to compensate but didn’t retrain pilots in the new aircraft in order to speed sales.

What culpability the company bears is a matter for the lawyers to sort out. Norwegian Air won’t be the last airline to demand compensation from Boeing for lost revenues while the 737 Max fleet is grounded.

The 737 Max scandal is a disaster for the United States, and it couldn’t have happened at a more delicate moment. China’s aircraft manufacturer COMAC already has nearly 1,000 orders for its C919 twin-engine passenger jet, designed to compete with the 737 Max as well as the Airbus 320.

Not only has the prestige of American industry been tarnished, but the credibility of its air safety regulators, the Federal Aviation Authority and the National Transportation Safety Board, is compromised.

President Trump should remember Winston Churchill’s advice never to waste a crisis, and use the full power of his office to hold Boeing accountable for cutting corners and withholding key information. That’s the right thing to do as a matter of sheer political expediency – Americans want their leaders to stand up to industry corruption – but it’s also a strategic opportunity.

The main reason that America’s military position has deteriorated relative to strategic competitors is corruption, pure and simple.

The incestuous alliance of the defense industry duopoly (Boeing and Lockheed-Martin) and the Pentagon brass has saddled the military with backward-looking strategies and enormous costs. Defense contractors don’t make money by innovating; they make money by selling the same systems to the Pentagon year-in, year-out.

Just as Generals and admirals don’t get promoted by proposing something new and radical; they get promoted by commanding the same kinds of forces that their superiors commanded.

Never mind that carrier-based aircraft are a 100-year-old weapons system, and that modern missiles and submarines can neutralize aircraft carriers, and that existing American carriers have to operate 1,000 miles from the Chinese coast to stay out of range of Chinese missiles.

The Pentagon wants more carriers, F-35’s and F-18’s. Like cavalry in World War I or battleships in World War II, they look good on paper but won’t help much in actual fighting.

It’s no surprise that Boeing CEO Dennis Muilenburg’s first phone call was to President Trump. The 737 Max affair is political by its nature: China will exploit American fecklessness to advance its own commercial position.

Ethiopia balked at permitting the US regulators to download data from the black box recovered from the crash of Ethiopia Airlines Flight 302, as The Wall Street Journal reported Tuesday (3/12):

“After Ethiopian authorities indicated they wanted to send the flight-data and cockpit-voice recorders overseas and preferred the UK’s Air Accidents Investigation Branch as an objective outsider, these officials said, US officials privately made a push to have them sent instead to the National Transportation Safety Board’s facilities. As of late Tuesday, they said, the US hadn’t received a final decision.”

China was the first country to ground the 737 Max, despite the FAA’s assurance that the aircraft was safe to fly. Except for Canada, the rest of the world, including America’s English-speaking allies, followed China. Bloomberg News commented:

“The second fatal crash of a Boeing Co 737 Max aircraft in less than five months is creating a new hierarchy in aviation safety. Thrusting to the top: China… country after country ignored assessments by the US Federal Aviation Administration that the plane is safe to fly. Canada agreed it was too early to act but many fell into line in growing numbers behind the first major nation to ground its 737 Max fleet – China.”

The COMAC C919 relies heavily on Western technology and testing, in particular from Canada’s Bombardier. Nonetheless, the prospect that China may leap into global preeminence in aircraft sales will not go down well in Washington, especially after most of America’s allies rebuffed the Trump Administration’s efforts to shut China’s Huawei Technologies out of the 5G broadband rollout.

Aircraft are China’s biggest import from the US. In 2017 China bought $16.3 billion worth of American planes, compared to $12.3 billion of soybeans, $10.5 billion of passenger cars, and $6 billion of semiconductors. Boeing’s troubles may work their way into US-China negotiations over a trade deal.

But America’s biggest problem is the erosion of its industrial capability. It appears that Boeing cut corners and eschewed a long-needed redesign of its most profitable product because the additional capital expenditures and longer lead times would not have been viewed benevolently by the stock market.

Boeing relies more on its lobbyists than on its engineers, and it typifies everything that is wrong with the “swamp” against which Donald Trump ran for office. Now he has a golden opportunity to clean out the swamp, and he would be well advised to seize it.