THE DESCENT INTO PROGRESSIVE MADNESS 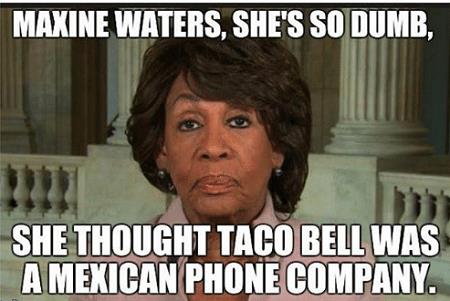 The progressive street is leading fossilized Democrats into a dead end of collective madness.  From Dianne Feinstein to John Kerry to Maxine Waters to Cory ‘Spartacus’ Booker, Democrats are losing their marbles.

The dinosaurs of the party desperately seek relevance by sounding crazier than the new unhinged base that disrupts Senate hearings, loudly pronounces a new socialist future, and envisions octogenarian Maxine Waters (age 80) as more the future of the party than is septuagenarian Nancy Pelosi (age 78).

The spectacle is right out of Euripides’s Bacchae, as the creaky old guard of the polis, Tiresias and Cadmus, dress up in trendy, ridiculous ritual costumes to stumble along after the racing and frenzied young maenads (the “raving ones”) in their lethal courtship of suicidal Dionysian madness.

Six-term senator Dianne Feinstein is running against a far more radical Democrat, Kevin de León, in California’s general election. (He added the accent and the “de” to his name in midlife, thereby enhancing his ethnic authenticity.)

Feinstein’s current Senate colleague, the junior senator Kamala Harris, has been interrupting, sermonizing, and shouting at the Kavanaugh confirmation hearings in a fashion that generates the media buzz and attention usually reserved for supposedly sober and judicious old hands like Feinstein.

Apparently in reaction to these youthful, far-left challenges, a frustrated Feinstein has decided to descend even lower than Harris, who once, after all, joked about killing Trump.

(When asked what she would do if stuck in an elevator with Trump and Pence, Harris answered, “Does one of us have to come out alive?”  Shame no one heckled her back, “It wouldn’t be you!”)

Feinstein admits that she has had the new “evidence” about Judge Brett Kavanaugh in her possession for at least six weeks. And now, at the eleventh hour after the confirmation hearings are over, she attempts to gin up enough hysteria, without formal refutation, to sink his nomination to the Supreme Court.

Supposedly (extremely so) when Kavanaugh was a 17-year-old in high school (that is 36 years ago), a young female fellow high-schooler (that is, Christine Blasey Ford, the suddenly identified author of the complaint) felt that she was sexually harassed by the teenage Kavanaugh and a chum, and that at this opportune moment, the traumatic experience of more than three decades ago has come to a boil and therefore should be aired precisely when Kavanaugh is likely to be confirmed.

Dozens of high-school friends of Kavanaugh have offered testimonies that they never heard of any such assault. His supposed co-defendant adamantly denies the charge. Blasey Ford cannot remember the location or the date of the alleged assault.

In her originally anonymous accusation, she claimed that she had sought “medical attention” for the attack. In fact, she is  referring, less dramatically, to a visit 30 years later to her therapist, where she mentioned the incident in the course of relationship therapy. And yet the therapist’s notes, taken at the time of her assertions six years ago, do not support her latest version of the teenage Kavanaugh’s alleged assault 36 years ago.

In publicizing the letter anonymously at first, Feinstein apparently had lots of aims besides blowing up the Kavanaugh sure-thing nomination. In the new progressive world of Julia Salazars and Alexandria Ocasio-Cortezes, Feinstein also wants to strut her ossified progressive fides.

That is, she seems desperate to remind California voters that while she may be an 85-year-old white woman, married to a crony-capitalist billionaire, and a longtime resident of a 20-million-dollar Pacific Heights mansion, she is still a growling hard-left and partisan lioness in winter.

Feinstein also hopes to show that she is still a key Senate player and a newsmaker. Recently, we learned that, for nearly 20 years, she was cuckolded by hiring and retaining a chauffeur and personal gofer who all the while was a Chinese spy — a disclosure suggesting that the former chairman of the Senate Intelligence Committee was, well, not exactly so intelligent.

Unless of course she knew he was a spy all along.  After all, she’s been in bed with the Communist government of China for decades.

A similarly angry and frustrated Democrat, former secretary of state John Kerry, is not to be outdone either.

Recently in a variety of venues he has confessed that he has kept back-channel communications open with Iranian foreign minister Mohammed Javad Zarif, his former partner in forging the so-called Iran deal. Apparently, Kerry is seeking to reassure the Iranians that Trump’s recent cancellation of the deal is felt to be a mistake by sober and judicious Washington establishmentarians such as himself.

Further, if the two such transnational professionals can maintain deep-state negotiations apart from and contrary to the current U.S. government, one day calm with Tehran will be restored by the likes of none other than John Kerry.

As Kerry put it in bureaucratic lingo: “What I have done is tried to elicit from him [Zarif] what Iran might be willing to do in order to change the dynamic in the Middle East for the better.”

Translated, “dynamic” means something along the lines of “I am trying to work with the Iranians to nullify the current official policy of the U.S. government.”

Paul Manafort was indicted in part for being an unregistered foreign agent. John Kerry feels that he should be praised as paragon of moral virtue for the same offense.

Otherwise, America need not “elicit” anything from Zarif, given that one need only look to the work of the Iranians and Hezbollah in Iraq, Lebanon, Syria, and Yemen, and survey its missiles and surrogate rockets pointed at Israel.

Pause for a moment and collate some of the assertions of other mainstream Democrats in recent weeks.

Former law professor Senator Elizabeth Warren (D., Mass.) has claimed that an anonymous op-ed in the New York Times and unsubstantiated charges from unnamed sources in Bob Woodward’s book Fear are now grounds for removing from office an elected president through the invocation of the 25th Amendment.

Follow further the law professor’s logic: Produce an unsigned accusation or write a book based on gossip of unnamed informants, and, presto, the president is proven nuts and should be removed. I suppose the anonymous op-ed and concurrent Woodward exposé fueled by anonymous sources will be short-cut substitutes for impeachment and a trial in the Senate.

Senator Cory Booker (D., N.J.) railed long and hard at the Kavanaugh hearing before boldly announcing that he was violating Senate rules (“bring it on”) by bravely releasing classified information for the higher purpose of destroying Kavanaugh’s chances.

Only, he didn’t — Booker knew that his supposedly explosive leaked information had already been declassified and was in fact mundane.

Weirder still, Booker apparently did not grasp or care that the documents reflected positively, not negatively, on Kavanaugh’s character.

Psychodrama soon became farce when Booker chimed up “I am Spartacus” — as if he were a Roman slave willing to be crucified for the principle of not revealing the true identity of the slave leader Spartacus in his midst. No one could sort out the logic of all of Booker’s incoherent metaphors and so concluded that while he was obviously buffoonish, he might be unhinged as well. 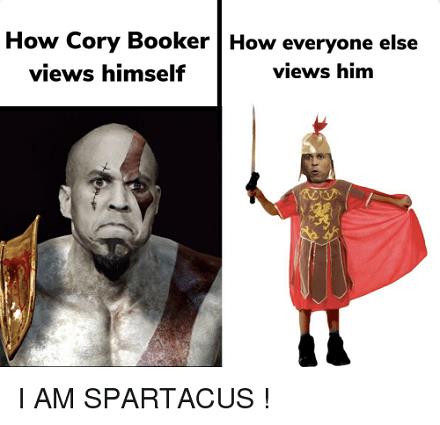 Congresswoman Maxine Waters (D., Calif.) used to be known for very little other than her past financial improprieties of using her office for personal and family gain, and for her serial boilerplate accusations of racism.

Recently, however, at 80, she has come into her own as a self-appointed spokeswomen of the new progressive party. In June, she called for thuggish behavior against government officials:

“If you see anybody from that Cabinet in a restaurant, in a department store, at a gasoline station, you get out and you create a crowd and you push back on them, and you tell them they’re not welcome anymore, anywhere.”

If anyone thought this was a slip of the tongue, Water recently insisted that this call to arms was too tame.

“There are those who said we lacked civility when I got up and talked about the President’s cabinet, and I said if you see them anywhere, if you see them at a restaurant, if you see them in a department store, even at a gasoline station, just tell them you’re not welcome here or anywhere. And so, it frightened a lot of people, and of course the lying president said that I had threatened all of his constituents.

I did not threaten all of his constituents, his supporters. I do that all the time, but I didn’t do it that time. But what bothered me so much was, they tried to frame that as violence. That’s not violence. As a matter of fact, the poster child for violence is the President of the United States. . . . When I compare what you’re doing with what we have in Washington, D.C., in the highest office in the land, I wake up in the middle of the night and all I can think about is: I’m gonna get him. I’m gonna get him. I’m gonna get him.”

The new heartthrob of the Democrat party, socialist Alexandria Ocasio-Cortez, former Westchester County resident, promises that a new generation of socialists such as herself will take the party hard leftward to perpetual electoral dominance. And to prove the growing popularity of redistributive socialism, she just posed with a hardhat construction worker in a chic $3,505 outfit. 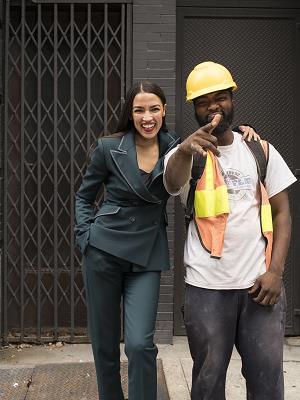 A socialist might wonder how many needy children could have been clothed with adequate Walmart ware for $3,505 — 40, 50, or more?

Not since the disclosure of Bernie Sanders’s three homes, or Elizabeth Warren’s past real-estate success in flipping houses (“you can make big money buying houses and flipping them quickly”) have we been so personally enlightened about the Animal Farm two-legs-for-us/ four-legs-for-them rules of the new Democratic socialism.

Finally, Occasio-Cortez herself is in some jeopardy of being upstaged by yet another young, zealous, female identity-politics socialist: Julia Salazar, candidate for the state legislature in New York.

Oddly, almost everything that Salazar has said to enhance her progressive credentials is untrue — and untrue in a blatant Elizabeth Warren, Ward Churchill, and Rachel Dolezel identity-fraud way. Salazar is not an immigrant; she did not grow up impoverished; she is not part Jewish; and she did not graduate from Columbia University. 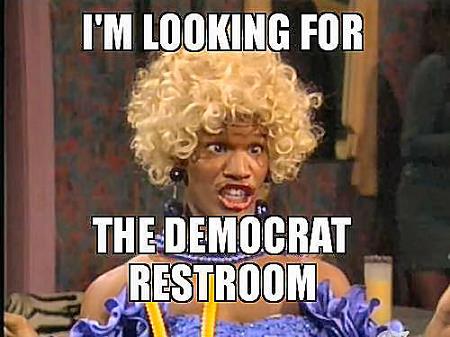