THE DEMOCRAT PARTY HAS FALLEN AND CAN’T GET UP

In 1987, Life Call took America by storm with TV commercials advertising a necklace for elderly people that had a button on it connecting them to emergency services.  The memorable tagline was “I’ve fallen and I can’t get up.”

On Monday (6/08), Nancy Pelosi and the rest of the Democrat leadership became the living embodiment of a tagline symbolizing helpless frailty.

We saw numerous Democrat members of Congress, mostly from the Congressional Black Caucus, engaging in the type of symbolic theater so beloved on the left: wearing scarves made from fabric with traditional Ghanaian patterns, they knelt in Congress’s Emancipation Hall for eight minutes and 46 seconds, the same amount of time during which police officer Derek Chauvin restrained George Floyd: 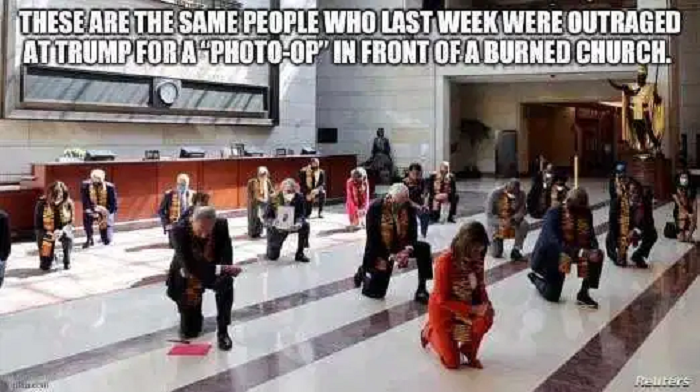 That was theater.  Reality was watching the same Congress people — especially the aged Pelosi — struggle to stand again:

For those of us who vividly remember the Life Call commercials, it was impossible not to see in Nancy Pelosi and the other leaders the pathetic, frail, helpless woman, trapped on the floor, crying out, “I’ve fallen, and I can’t get up”:

When I see Democrats crawling around on the ground, I do not see leadership or even faux humility.  I see a party that is weak and has lost its way.

I know that people are worried about the violence in Democrat-run cities and the rise of Black Lives Matter as a political force on the left.  However, I see all this rampaging theater as a good thing.  This isn’t an ascendant force; it is a political party in its death throes.

For a brief moment, in the early 1960s, the Democrat party could be said to represent good things for and about America.  It was against communism, it was beginning to turn its back on the racism it espoused with slavery and Jim Crow, it was fighting for second-wave feminism (equal pay for equal work and equal access to jobs), it wanted lower taxes, it supported the American worker against the world, and it believed in the American family and its values.

One could disagree with its belief that government expertise could solve problems, but its heart and the hearts of its broad base of followers were in the right place.

Today, the Democrat party is for communism, it’s again obsessed with race, it fights for third-wave feminism (men are garbage except when they’re women), it wants ever more taxes, its open-border policies are wiping out American workers, and it’s hostile to American families and their values.

Outside academia, inner cities, upscale coffee shops, and mid-level corporate management (made up of recent college grads), these are not popular positions.

Donald Trump’s open love for America, his refusal to grovel, and his willingness to fight on every point may have offended the intelligentsia, but for everyone else, they represented the worm turning.  Finally, the skinny conservative guy had turned around and kicked sand at the bully.

Contrary to bodybuilding ads that showed the bully instantly slinking away, that’s not how it usually works.  Bullies need to be beaten badly before they’ll slink away.  First, they’ll fight back.  That’s what we see now.

The riots in Democrat-run cities are the bullies trying to say that even if the Democrat party can’t offer solutions to the problems it caused, it’s still a force to be reckoned with.

We can see that this claim is a lie when we watch that video of the pathetic Democrat leadership, bowing down and barely able to rise again (or, in the case of the party leader, entirely unable to rise).  They’re weak; they’re frail; they’ve fallen; and, with Trump’s economy roaring back to life and indictments coming down the line, there’s no way they’re getting up again.